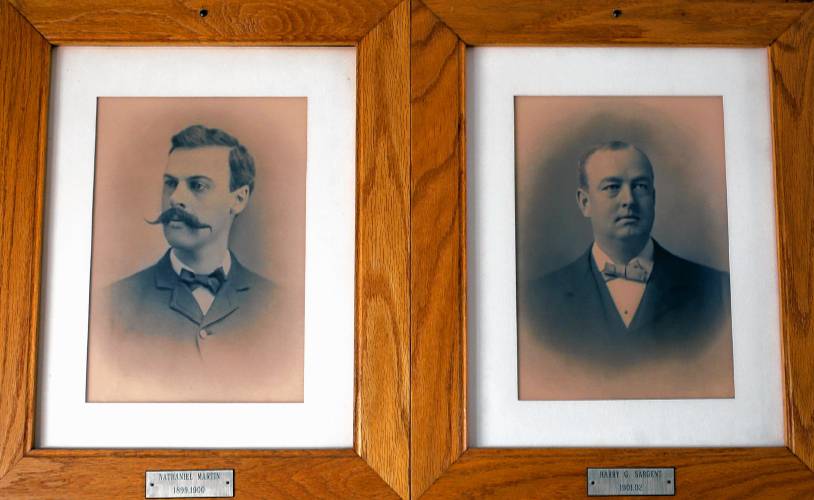 (If you want to listen instead of read, listen to me talk about this weird topic with Peter Biello on NHPR)

If you’d like to see an intriguing example of how technology can alter human behavior, pause on the landing between the first and second floors of Concord City Hall.

There you’ll see a big wall filled with photos of past mayors in chronological order, from Joseph Law in 1853, when the city was chartered, through the mid-20th century. More recent mayors are shown on the floor above.

Look at these pictures for a moment and you’ll notice something odd: What happened to all the facial hair?

There were 20 mayors before 1900, and only two were clean-shaven. Starting with Law, most are bristling with beards and mustaches and hairy add-ons like mutton-chop whiskers and John Abbott’s neck beard, which – minus the outfit – makes him look like an illustration of Cro-Magnon man in a biology textbook.

After 1900, the city has had 25 male mayors (Elizabeth Hager, the only woman elected to the office, gets a pass), and a whopping 23 of them were clean-shaven. The other two sported little mustaches that in the Gilded Age would have hardly counted as facial hair at all.

“People were shaving with straight razors,” said David Caron, owner of the New England School of Barbering in Concord, whom I approached to help explain this anomaly.

Yuck. Using a small, sharp sword to scrape off the surface of your jugular vein or your sensitive upper lip is no trivial matter – so of course men were happy to keep their hair growing. If not that, they were happy to have somebody else do the scraping.

“The guy I bought the shop from – Rudy Lafond – when he was a young buck, he said to go get a job (at a barbershop), they didn’t care how you cut hair, they cared how you shaved,” Caron said. “Back then, people still went to the barber shop for a shave.”

Safety razors were first developed in the 1890s but really exploded after 1901, when King Gillette (that was his first name, honest) patented the disposable razor blade. By 1905, the industry was in full swing, and it was just as easy to be smooth-cheeked as not. So American society decided that its leaders no longer needed to be festooned with facial fleece.

Concord isn’t alone in this change, incidentally. U.S. presidents were hairy as all get-out through William Howard Taft, who held office until 1913, but none have had any facial hair since. And beards show up pretty regularly on New Hampshire governors through 1911 – including Chester Jordan at the turn of the century, who looks like he had pasted a small sheep to his chin. After that, they disappear.

So that’s that? Well, maybe not.

As I was writing this column I found a 2012 story from the online magazine Slate titled “Why don’t politicians today grow beards?”

Unlike me, Slate says social acceptance rather than technological change drove the disappearance of facial hair. I scoffed at their conclusion – after all, it upends the premise of this entire column – but then realized that Slate might have a point.

Consider our governors: None had any facial hair from John Langdon in 1785 through John Steel in 1846, even though they also had to deal with straight razors. Similarly, presidents from George Washington through Lincoln in 1861 were mostly clean-shaven despite living in the pre-safety-razor era.

It’s weird, when you think about it. It’s like all men had to shave until the mid-century, when a buzzer went off and suddenly it was okay to be hairy. I hadn’t spotted this pattern in the City Hall photos because Concord didn’t have a mayor until beards were already the rage.

So what shaving technology caused this change in the 1850’s? Nothing that I can figure out. It just happened.

So maybe I’m wrong, and it wasn’t a new technology in the early 1900s that caused the beard to disappear. Maybe it was just irrational habit. Slate, for example, suspects the hairy Karl Marx gave beards a tinge of communism that drove them out of favor in U.S.

I guess this lack of any technological cause makes sense, because beards aren’t rational. Unless you need a good seal on your gas mask – one reason the military frowns on beards – facial hair is just a decoration, lacking intrinsic value or usefulness. So I shouldn’t expect a sensible reason for their existence, or lack of existence.

Too bad, though. The timing of that Gillette patent was just perfect. But as they say, correlation isn’t causation.