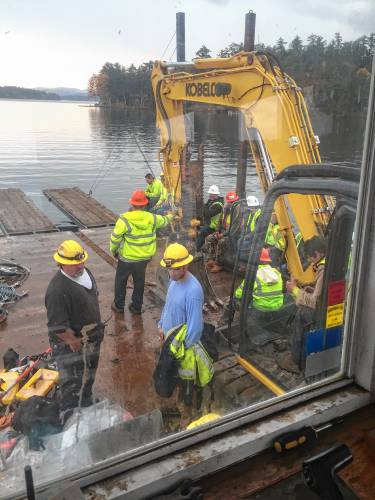 A week after a windstorm caused more power outages than any previous storm in the history of New Hampshire Electric Cooperative, the utility’s last few hundred customers are still being hooked up – but there’s a reason it’s taken so long: They’re on islands in Lake Winnipesaukee.

“We usually save them for last,” said Seth Wheeler, NHEC spokesman, regarding the company’s customers on islands within the towns of Gilford, Meredith and Alton. Roughly 360 of them were still without power as of Monday afternoon.

This low priority comes partly because these island homes are almost entirely seasonal and are already closed up for the winter, making it less urgent to restore their power than it is for homes where people need light and heat.

“Most of the houses are empty, although some people went back up this weekend just to check out the damage,” said Lisa Ward, office manager for Island Service Co., a private company that services many of the island homes on Lake Winnipesaukee.

And unlike roadside utility pole repair, it takes a lot of time to restore power to a home when equipment must be hauled around on a boat. 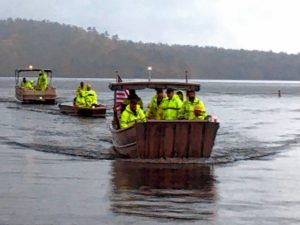 Three work crews from the New Hampshire Electric Cooperative make their way back from Bear Island to Shep Browns Boat Basin in Meredith at sunset after working to restore power on the island. The utility?s last few hundred customers are still being hooked up on Monday November 6, 2017.

“You have to move the excavator by barge from one location to another on the island to plant another pole,” Wheeler said. “It takes a long time.”

Crews are ferried across the water in the morning and don’t get back until about dusk, Wheeler said. They go from job to job out on the islands.

“Since there are no roads on most of the islands, it’s a slow-going process to move large equipment around,” Ward said. “The barge comes in handy for this type of mobilization.”

That’s more outages than NHEC has seen in any storm ever, even the Christmas ice storm of 2008.

Overall, the Oct. 30 storm was the fourth-worst on record for New Hampshire in terms of power outages, with more than 270,000 customers without electricity at the peak. Power had been restored to all but a few hundred customers in the state by Monday, a majority of those on Winnipesaukee islands.

“It’s just like the mainland – trees come down on wires – but the wind occasionally is worse out there than elsewhere because it comes across (the lake) and you’re not protected,” Wheeler said.

The islands in the lake are connected to the mainland by a number underwater cables that connect to the mainland power grid at various locations, although sometimes one island is connected only to another island. No transmission cables connecting islands were damaged.