Did your internet get knocked out by that big storm? Cell phone? Are you sure? 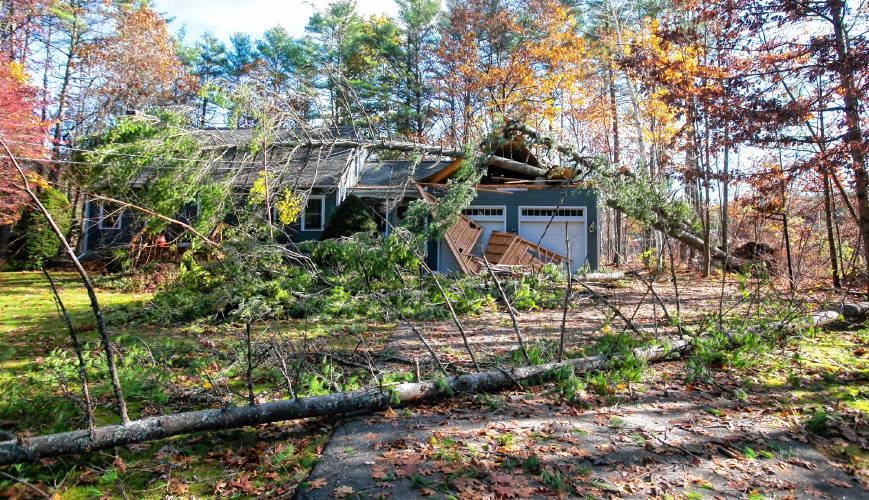 The house at 546 Mountain Road in Concord sustained heavy damage from trees falling during Sunday?s storm.*

When a damaging windstorm raced through New Hampshire right before Halloween, lots of information was quickly available about what had happened to our electricity supply.

There were live reports of a number of outages, expected times for reconnections, even some interactive maps showing power loss by town, all visible on your cellphone.

There’s no easy way to know how many people lost internet connection during the storm.

That’s a paradox of our ever-more connected life: In some ways it’s harder to know today how storms have affected communication than it was in the days of Ma Bell and telephones connected to the wall.

Supplying electricity is a heavily regulated utility in which companies are required to tally and report information quickly. But changes in technology and declining interest in government oversight has turned communications in a hodgepodge of incompatible and largely unrelated technologies – cable modems, DSL over copper lines, fiber-to-the-home, wired phones and cellphones – that defies easy analysis.

So while we know that 450,000 New Hampshire customers were without power at peak, it’s not clear how many people were left without voice or data service as falling trees pulled down wires or rattled towers.

Consider Verizon Wireless. Queried by the Monitor, spokesman David Weissmann said that nine New Hampshire towers “were knocked offline by the storm,” representing “about 2 percent of our total sites in the state.” They went down, he said, mostly because of damage to the fiber-optic lines that carry the signals collected by each cell tower and connect them to the overall telephone network, rather than because of damage to the antennas or towers themselves.

This doesn’t necessarily mean 2 percent of Verizon Wireless’ customers in New Hampshire lost service, however. Due to the way cell networks work, switching signals automatically from one tower to another, it’s possible that phones in places which would normally use the damaged towers made use of another tower nearby.

As a result, Weissmann said that the effect most likely to be noticed was “intermittent network disruptions” as the undamaged towers were crowded with too many callers at once. But how many people suffered disruption and for how long? That’s not known – at least, not publicly.

As a side note, Weissmann said that roughly 200 of the company’s sites throughout the three-state Northern New England region were operating on generators at some point during the windstorm because they had lost power.

“(That) is not a normal day for our network,” he wrote in an email. “Our investment in back-up power made the difference in keeping the cell sites up and keeping customers connected.”

Marc Goodman, spokesman for Comcast in New Hampshire, agreed. He said that preparing fuel and emergency generators at headends, the buildings throughout the network that process television and internet signals and distribute them over cables to homes, is one of the key things the company does when a storm is headed our way.

Comcast, the state’s biggest cable provider, did not have figures for how many New Hampshire customers lost connection, but Goodman said that’s partly because it’s hard to parse out how many lost connection only because they lost power, rather than because Comcast’s cables of equipment were effected.

Emergency management officials are well aware that it’s complicated to keep track of the status of public communications during emergencies.

Electricity is the most vulnerable

Electric power is the utility most affected by storms largely because it’s the most vulnerable. Electric wires are at the top of utility poles, keeping them as far away as possible from people, and so are the first to be hit by falling tree limbs. In general, cables for cable and internet service come below them, and copper lines for traditional telephone service is at the bottom.

Combined with the relative vulnerability of transformers, the units that look like trash cans which sit atop many utility poles that reduce transmission voltage so that it can be used by residences, this means that an ice storm or wind storm will cause far more problems with electricity than with communications.

Sometimes, technology can help keep communications and it doesn’t have to be new tech.

For example, traditional copper wire telephones – known as POTS or “plain old telephone service” in industry jargon – often remain working even when the power is out, even lighting up when you take them off of the phone the cradle. This is because phones use so little power, and in DC rather than AC form, that they can be kept working by battery systems located on some utility poles even when the entire neighborhood is dark.

Similarly, Goodman noted that customers who use Comcast for their telephone service usually have batteries inside units known as EMTA that handle the voice service. Their phones may still work even when power is out and there’s no internet or TV via the cable modem plugged into the wall – unless, that is, a utility pole has been knocked over in your neighborhood.

And there’s the rub: All the newfangled technology and planning in the world won’t help if too many trees fall in the wrong place.

Just ask the region’s smallest telecom company, independent Dunbarton Telephone Co., which despite its size has been installing the fastest technology of fiber optic cables clear to customers’ homes, something that’s not available in many New Hampshire cities.

“We had a tree come down on one of our back roads and sever our fiber-optic cable. It affected 67 customers, voice and internet,” said Dave Montgomery, the company’s general manager. A company was called in to do the complicated task of splicing the cables, which are made of glass and transparent plastic, and Montgomery said the customers were back up within 24 hours.

“Other than that, we fared pretty well,” he said.