The nation’s first real wind farm was in New Hampshire 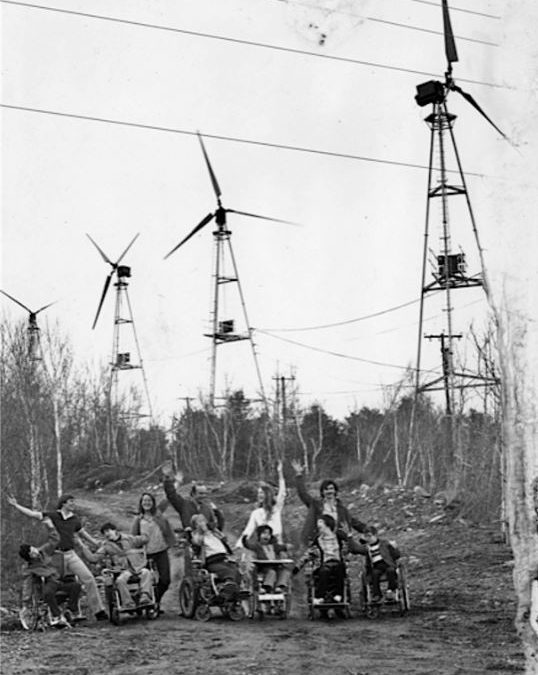 This photo shows residents and workers at Crotched Mountain Rehab Center walking under the working wind farm, in 1980 or 1981.

E&E News, which focuses on energy and the enviornment, recently ran a story about a former UMass-Amherst professor often seen as the father of modern wind power because of the very early work he did in designing, testing and improving wind turbines.

Their story (read it here) did not mention, however, one fact of great interest to New Hampshire: The college established the first real wind farm in the nation on Crotched Mountain in Francestown, very close to the current ski area, in 1980. (I must note that the first functioning wind turbine, if not wind farm, feeding power to the grid was built on Grandpa’s Knob in Castleton VT in 1940.). I wrote this story about the project in 2013, so I thought I’d dust it off and run an edited version again:

The world’s first wind farm stood on the north side of Crotched Mountain in 1980, on land owned by the Crotched Mountain Rehabilitation Center, a hospital and school that serves individuals with disabilities and their families.

Its opening was a big deal; newspapers all over the region covered it as a sign of the future – including this AP story: 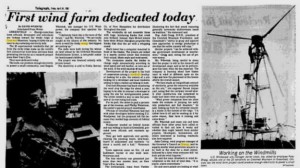 An Associated Press article about the dedicated of the Crotched Mountain Wind Farm, published April 24, 1981, about four months after the 20-turbine windfarm started working.

Today, there is virtually nothing left of the wind farm aside from a few concrete slabs in the brush, which once supported a tower leg, but its setting remains unique.

It is surrounded by the Crotched Mountain Rehabilitation Center’s two hiking trails – the 1.6-mile Gregg Trail, named after the center’s founder, Harry Gregg, and the Dutton Brook Trail, which winds around a beaver-built wetland.

They are among the longest wheelchair-accessible trails anywhere, and may well be the world’s longest, and are open to the public for free.

(Incidentally, the center is separate from nearby Crotched Mountain Ski Area, which is on an entirely different ridge.)

The wind farm wasn’t much of a wind farm by modern standards, even though it had 20 turbines, because each tower produced only 30 kilowatts of electricity at full blast. Each of the giant turbines on Lempster Mountain and other modern wind farms generate up to 100 times as much electricity.

From the point of view of power production, Crotched Mountain Wind Farm was a dud, partly because there wasn’t enough of a breeze and partly because wind turbine technology was so new.

“We still have the old wind data. You look at it, and what you can see is 13 mph is the most frequent entry, and very gusty,” said Don Shumway of the center. “The towers were only 60 feet tall. The minimum functional wind speed they said it went down to was 10 (mph), but the staff said even at 13, you wouldn’t necessarily be seeing anything generated.”

Further, Shumway said, “Blades in a high wind would break off. On any given day, the majority would not be spinning – waiting for parts, waiting for people to come up and work on them.”

It only lasted a year or two before the turbines were taken apart – without fanfare.

From the point of view of history, however, the farm was anything but a dud, since it led indirectly to Altamont Pass Wind Farm in California, which launched the modern wind industry.

The wind farm was an outgrowth of the wind energy program at UMass-Amherst, which still is running today. (Here is their website)

A number of early graduates founded the first modern wind turbine manufacturing firm in the United States, called U.S. Windpower. The program and its first turbine were so important, the Smithsonian Institution has one of their real wind turbines, the WF-1.

U.S. Windpower built the Crotched Mountain wind farm in late 1980, using “descendants” of WF-1, largely as a test bed, although the towers did feed power into the grid.