A gigantic vat of bacteria to eat sewage! 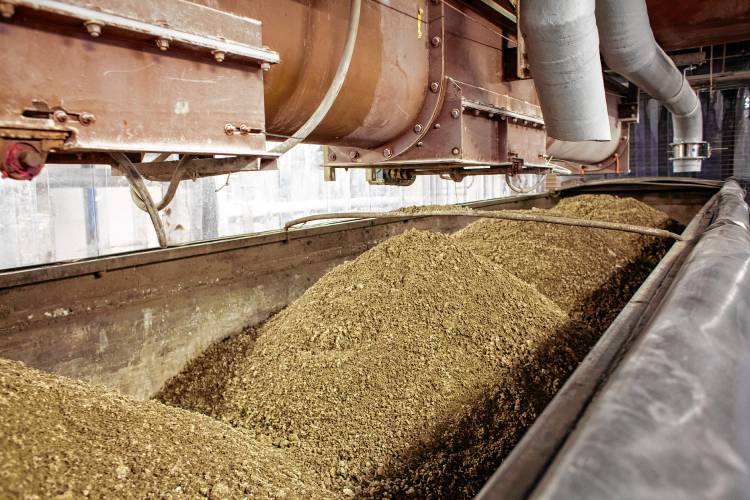 Biosolids ready to be hauled away at the Hall Street Wastewater Treatment Plant in Concord on Wednesday, Nov. 29, 2017. (ELIZABETH FRANTZ / Monitor staff)

You need to have many different skills if you work with sewage. One of them is a skill for crafting euphemisms.

“What I politely call ‘the stuff’ is the Achilles’ heel of all wastewater plants,” said Chip Chesley, who, as director of the blandly named General Services Department of Concord city government, oversees the wastewater treatment plant.

Ah, yes: Stuff. By that Chesley means all the solid matter that is produced by the digestive systems of you, me and some 50,000 other folks in and around Concord – roughly 50 tons of it every week.

Right now, Concord takes incoming sewage, removes as much water as it can, uses lime to kill pathogens in the resulting glop (my variant of “stuff”), and spreads the result, officially called biosolids, on fields and farms throughout New England as fertilizer.

Chesley would like Concord to replace the middle step – that bit about applying lime – with a huge tank full of oxygen-hating bacteria called a digester. These anaerobic bacteria would eat some of the glop, reducing its volume and toxicity while producing methane as a waste product that could be burned for heat and power, saving the city money in the long term.

Building the digester would be expensive – a first estimate is $17 million – but will probably be necessary in about a decade, when the current system hits 25 years old and maintenance becomes prohibitive. That’s why Chesley and other folks in General Services are discussing digesters, including a presentation before the city council last month; they want people to get used to the idea and perhaps start putting some money aside.

Building a multistory vat of bacteria may sound convoluted, but it’s actually routine. Nashua, for example has been using an anaerobic digester since 2001, in a multistory green building that looks like one of the onion domes atop St. Basil’s Cathedral in Moscow. Boston uses the technology, too: If you fly out of Logan Airport and sit on the left side of the airplane you can see a dozen white digesters, like gigantic eggs, in the huge Deer Island Sewage Treatment Plant. Two large Granite State breweries – Smuttynose on the Seacoast and the Budweiser plant in Merrimack – have built anaerobic digesters to process organic waste from their beer-making.

Osborne said it cuts down on smells – always a concern at a sewage plant – and reduces the volume of solids by more than half.

“It’s about a 60 percent reduction in solids. That’s a reduction in trucking costs, processing, energy,” she said.

Electricity produced by burning the bacteria’s methane helps power the plant, and some is sold back to the grid. In Concord, Chesley said it’s not clear that this would make economic sense in Concord, since Nashua’s sewer system is much larger, producing about 2½ times as much solid material.

Still, the Concord sewage system is nothing to sneeze at. Waste produced by people throughout the city and parts of Bow and Boscawen flows through 170 miles of pipes and ends up at the sewage treatment plant next to the Merrimack River south of Exit 13 on Interstate 93. (Concord also operates a much smaller plant in Penacook, originally built to handle a long-closed tannery.)

A whopping 4.5 million gallons of liquid flows into Concord’s main plant each day. Over the course of about 24 hours, each drop is pushed and pulled through a couple of huge pumping and filtration stations as well as two 750,000-gallon outdoor pools – one of which is favored by gulls and the other by ducks, for reasons nobody can explain – until it is clean enough to be returned to the Merrimack River.

Left behind each week is about 50 tons of material that is screened out of the waste stream, or settles out of it in the pools. That’s the “stuff” that wastewater treatment plants – which were, after all, built to clean up water, not to clean up solids – are dealing with.

The raw sewage, by the way, is moved uphill into the pumping station via three giant Archimedes screws, a technology that dates back roughly 3,000 years and was used by the ancient Egyptians. Talk about time-tested.

As the wastewater moves through the plant, various solids, ranging from sand to organic bits of stuff, are collected by different procedures, including gravity and bubbling oxygen up through the liquid.

The final step involves squeezing solids to wring out more water, drying them at 158 degrees for a half-hour, and adding a lot of lime – roughly doubling the total volume – to kill pathogens.

This is an energy-intensive and labor-intensive step. Chesley described adding lime to the biosolids as “mixing flour with Play-Doh” that requires vigilance: “Operators have to be on the machines constantly.”

Most of that step would be eliminated by a digester, which Nashua said operates with minimal oversight.

The final result in Concord is less repulsive than you’d think.

I was shown 30 tons of the biosolids in a truck, waiting to be taken away by contractor Resource Management Inc. of Holderness, heading to a landscaping company in Massachusetts. It looked like dirt – a gravelly sort of dirt rather than rich loam, but still dirt. It didn’t smell too bad, either.

Still, it was sobering to think that a small city like Concord produces such huge amounts of waste, and does it day in, day out.

I can’t imagine the amount of biosolids generated by Boston or New York or Tokyo, let alone how much less-treated sewage gets spewed out of megacities like Mexico City or Lagos or Manila. It’s mind-boggling what 7.5 billion human beings can do – for better and for worse.

There is, incidentally, some concern about the very common practice of spreading biosolids on farmland. The fear is that it spreads toxins, including medicines and pharmaceutical products that pass through our bodies into our sewage, creating yet another environmental time bomb. But that’s a topic for another day.