An automated snow scale at UNH for climate monitoring 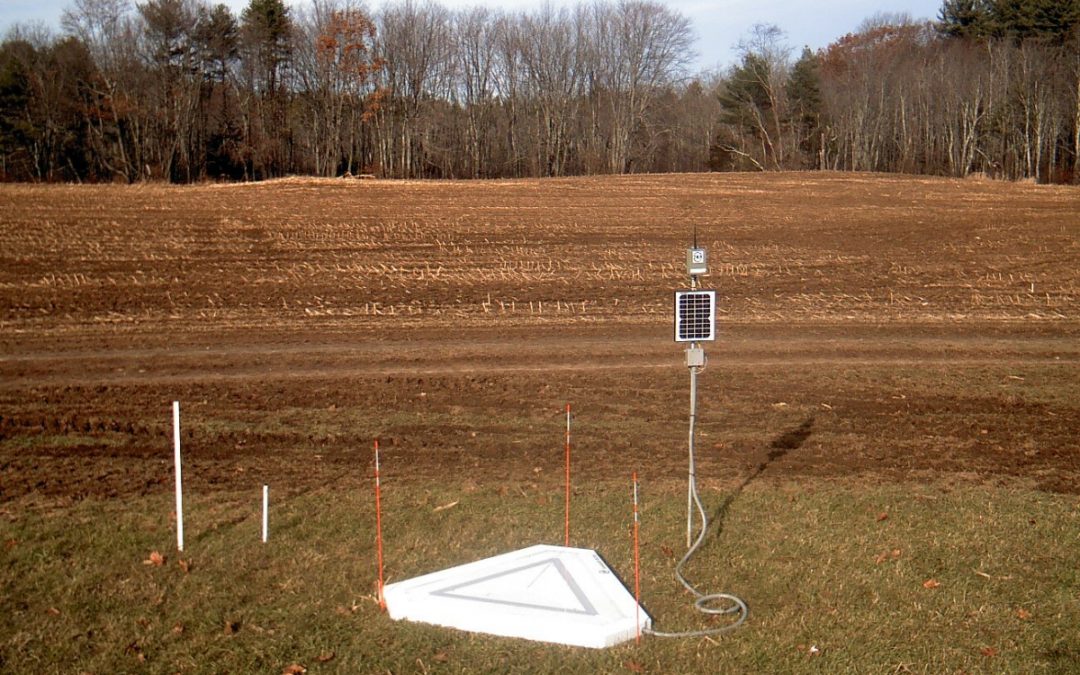 A SnowScale is installed at the Kingman Research Farm in Madbury. (UNH photo)

University of New Hampshire researchers will monitor New Hampshire’s snowpack in real time this winter using snow scales installed at UNH’s Kingman Research Farm, a facility of the New Hampshire Agricultural Experiment Station. This monitoring will lead to better understanding of the impact of less snowpack on everything from drought and the growing season to winter tourism.

Elizabeth Burakowski, research assistant professor at the Earth Systems Research Center within the Institute for the Study of Earth, Oceans, and Space at UNH, and her team are investigating how changes in snowpack affect the exchange of energy and water between the atmosphere and the land. Their goal is to further understand how much winters will continue to warm in response to human activities in the future, and how this warming will affect our ecosystem.

To do this, they have installed two SnowScales, new pieces of equipment invented by Chris Dundorf of 2KR Systems  in Barrington. The instruments communicate every 30 minutes via wireless modem to computers in the researchers’ offices where the data will be compared with information collected from other instruments at the farm.

“Winters in New Hampshire have been warming rapidly–more than 4oF since 1970,” Burakowski said. “With warmer temperatures come fewer days with snow cover, more frequent mid-winter thaws, and a greater proportion of winter precipitation falling as rain instead of snow. These changes in winter climate impact ecosystems in ways that scientists do not yet fully understand. Our study will contribute to a better understanding of how changes in snow cover affect the flow of energy between the land and atmosphere.”

Two years ago, New Hampshire experienced one of the warmest and lowest snowfall winters since 1895. Scientists believe warmer winters with less snow will become the norm. This, in turn, could potentially impact our ecosystem with increased incidence of drought, longer growing seasons, and less productive soils.

Snow is an excellent reflector of the sun’s energy and can help to keep surfaces cool in winter. Without snow, the ground absorbs much more of the sun’s energy and re-radiates it as heat, warming the near-surface areas. These changes in temperature, in turn, affect the flow of water through soils, especially as it freezes and thaws.

“Snow is also an excellent insulator. A snowpack acts like a blanket over soils and helps to prevent soil freezing events. Without deep, persistent snowpacks, will we have more frequent freeze thaw events? At what point does the temperature become too warm for freeze events? If soils remain thawed in a warm winter, will certain plants extend their growing season? All of these questions rely on accurate, long-term snowpack monitoring,” said Burakowski.

“As any Granite Stater knows, cold weather and snow draws millions of tourists to our North Country for winter recreation. Without snow, will tourists still make the trek north to support our rural economies? This is a multimillion dollar question. Our study is a first step toward establishing a network of snow monitoring equipment that could potentially provide us with long-term, high-quality snow records and relate tourist behavior to snow and winter climate,” she said.

This work builds off a National Science Foundation Established Program to Stimulate Competitive Research (NSF EPSCoR) project Ecosystems and Society. This research also is supported by the NH Agricultural Experiment Station, through joint funding of the National Institute of Food and Agriculture, U.S. Department of Agriculture, and the state of New Hampshire.