Other industries seek to profit from growth of craft brewing 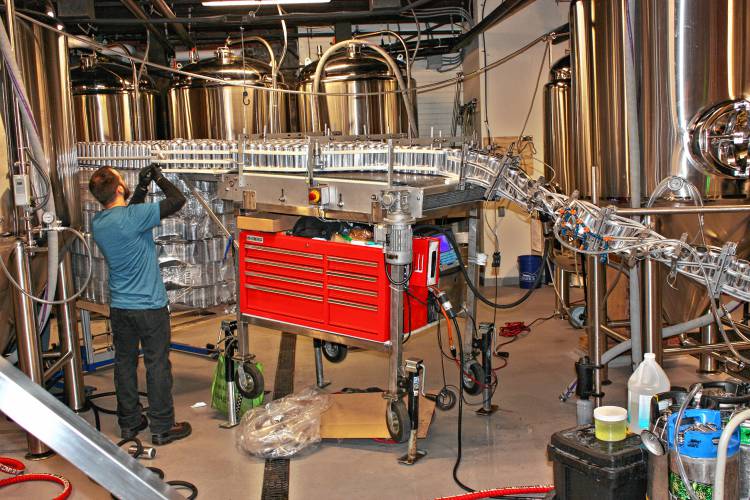 Assistant line operator Phillip Martin checks the thousands of empty, blank cans before they head down the line to be filled with beer at Concord Craft Brewing Co. JON BODELL / Insider staff

The obvious way to check on the growth of the craft brewery business in New Hampshire is to drink a craft brew. A less obvious way is to watch that brew being put into cans.

“In 2013 we started as one crew, one can line, one truck, out of Connecticut. … Now we have 28 trucks and 15 locations,” said Joe Marston, president of Iron Heart Canning.

Iron Heart, which has a large presence in Manchester, does contract canning. Its teams travel throughout the East Coast to breweries that don’t own their own canning equipment, some as small as Concord Craft, where Iron Heart was operating earlier this month, and some as large as Shipyard, charging between 13 and 25 cents per unit to help them profit from a growing interest in canned, rather than bottled, beer. The business is growing by leaps and bounds.

“These days, we can a beverage every second,” Marston said.

While not all of that involves beer – cold-brew coffee, mixed drinks and even wine (yes, wine) are going into cans these days – Iron Heart’s growth has been driven largely by the exploding market for craft brews.

“If you’re a microbrewery and you’re not in cans, customers will wonder. They’ll think, if this is a good brewery, why isn’t it in cans yet?” Marston said.

That’s why Iron Heart set up shop in New Hampshire, which in 2011 created the nation’s first legal definition for very small nanobreweries and has been riding the small-brewery bandwagon at full speed even as production at New Hampshire’s big-three breweries of Anheiseur-Busch, Redhook and Smuttynose has largely stagnated.

Iron Heart is an example of what might be called the next wave of the craft-brewing boom: The growth not just of breweries themselves but of other businesses that depend on the breweries to thrive.

These run the gamut from Maine stainless-steel fabrication shop TigPro, which now specializes in building brewpub equipment, to farms throughout the state that use grain left over from the beer-making process to feed their animals.

“We save them money, they save us money,” said Emily Smith, who with her husband, Neil, owns Bardo Farm in Croydon, which gets spent grain from Henniker Brewing Co. “It’s a great food source for pigs, for cows, for chickens, for all our free-range birds – geese, ducks, and we had turkeys before Thanksgiving.”

The farm picks up a few 55-gallon drums of spent grain several times a week, saving hundreds of dollars in grain costs and boosting the farm’s ecological credibility.

“Our pigs are 100 percent sustainably fed, and that’s a big part to do with Henniker,” Smith said.

Some of Henniker Brewing’s spent grain is also used to make bread at Daniels Restaurant in town, and even dog treats sold around the region.

“There’s not a lot of grain growing here. Hop growing is starting to pick up, but neither of them have been grown in any capacity here since well before Prohibition,” she said.

If it does get going, she said, “Then you’re going to get the co-oping of farm equipment. Hop harvesters, hop pellitizers – those are expensive resources that can move from farm to farm,” creating a business opportunity.

One spin-off business that is already going great is tourism, especially on the Seacoast, where the brewpub culture is more established.

For several years, Granite State Growlers (a growler is a jug that holds beer) in North Hampton has been running beer-theme bus tours, similar to tasting tours in wine country, and they’re not alone.

“The Portsmouth Chamber of Commerce came to Seacoast breweries and asked them to make a map. With most tourists who stops these days, their first question is: Where are the local breweries?” Parker said.

From state officials’ point of view, this is likely to be the biggest spin-off from growth in craft brewing. The model they’re looking at is maple syrup production, which is a tiny industry from the point of view of actual sales – only a couple million dollars of syrup is sold statewide each year – but has a huge multiplier effect in terms of drawing tourists and visitors to New Hampshire.

And there is a hope that having a lively craft-brew scene will help New Hampshire in its struggle to attract and keep young professionals.

Parker can point to an example closer to home of a successful spin-off from the craft-brew boom: Her job.

The 38-year-old has an eclectic job history, including working for UNH’s Institute for Earth, Oceans and Space, as well as spending several years as assistant supervisor of laboratory operations at McMurdo Station in Antarctica, before she and her husband got into brewing in Chicago. She was hired this year to create the new brewing science minor in Durham, which was why she was in Concord earlier this month to meet with the state Liquor Commission to iron out the details of making taxable beer at a tax-exempt school where most people are too young to drink.

There are 15 students enrolled in the three-course minor this year, a number that will probably increase in subsequent semesters. Parker said the course was put together so quickly that sign-ups happened late, after most student’s schedules were full.

The program will cover everything from the microbiology of yeast and the mechanics of brewing-specific plumbing to wastewater treatment and operating a small business. The university plans to open a brewery as part of the project, and eventually will be offering analytic tools, such as lab tests, to the state’s small breweries, Parker said.

The fact that the university is making such an investment in a program tailored to a specific industry says volumes about its belief in that industry’s future.

That does lead to one question, however. Craft brewing has grown so fast, is there any concern that the field is a bubble that will pop and leave UNH holding the bag?

Parker doesn’t think so. She points out that the U.S. has about 5,000 small breweries right now, which is roughly the number that existed before Prohibition killed off the industry back when the national population was one-third its current level. Further, she notes, the U.S. has some 10,000 vineyards and wineries, which are much more concentrated geographically than breweries.

“People have been drinking beer for 10,000 years; it’s not going to go anywhere,” she said.