Shared town names are a pain, but this gif-y database is fun 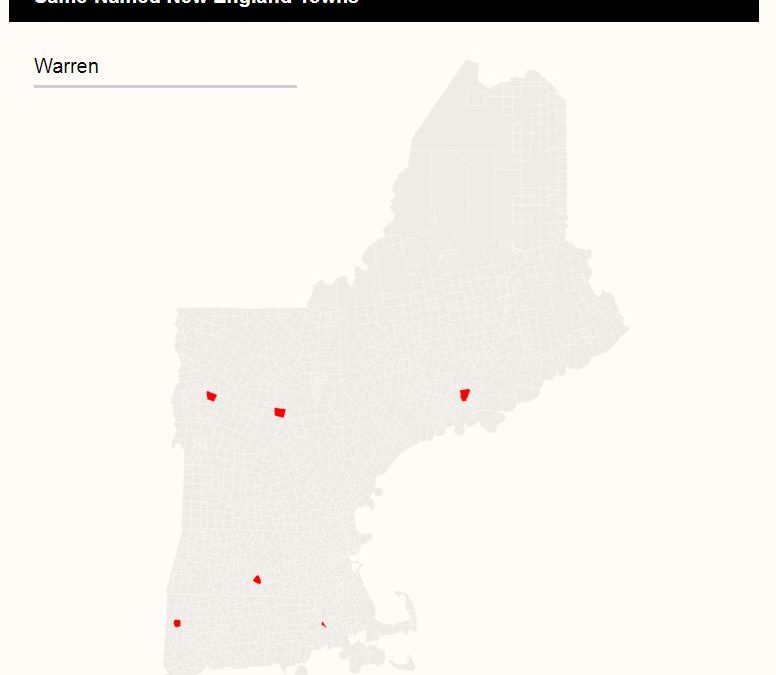 As a newspaper reporter in New England, I often stumble across the fact that many of our states share town names – e.g., Milford, Mass., and Milford, N.H., and Milford, Maine, and Milford, Conn. It can get very confusing if they’re near each other, which is often the case in southern New Hampshire and eastern Massachusetts.

So I was tickled pink to run across http://viewshed.matinic.us/2018/01/19/1151/ – an interactive database of all the shared town/city names in New England. It’s got a very clever gif plus the Python code to build it.

In case you’re wondering, all six states have a Lincoln and a Warren, and five of the six have an Andover, Bridgewater, Bristol, Chester, Newport, Plymouth, Richmond, Washington and Windsor.

I was surprised that only two states have a Greenville, which I’ve heard is the most common town name in the U.S.  There are four Springfields, another name often cited as the most common in the U.S. But Ken Jennings says neither of those is the winner nationwide: it’s either Fairview or Midway, he says – neither of which shows up in New England.