Is there life for startups in NH north of Manchester? 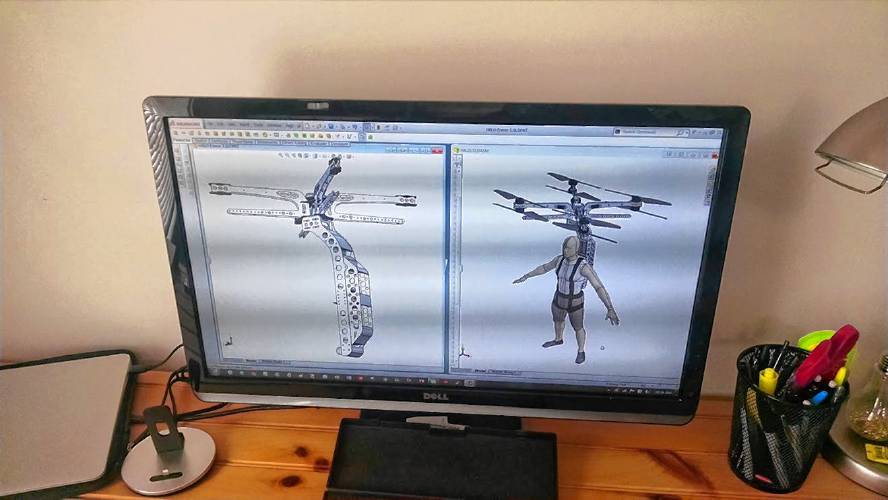 A CAD file for the HALO human-assist drone.

There’s a one-man startup in a Concord townhouse that’s trying to do some amazing stuff, such as build a man-sized drone pack that would let me trot up the Mount Washington Auto Road in less than an hour.

But its founder has hopes for something just as amazing: He wants to see a startup scene flourish in Concord.

“I like Concord, but if I can get more assistance in Manchester, I’ll migrate to Manchester. There’s definitely activity in the Millyard. If you’re a tech company, you have to be in that space,” said Tim Near, whose company Cyborg Lab is one of a dozen fledgling firms chosen for the Accelerate NHprogram from AlphaLoft, the statewide tech incubator. “I would like to see Concord be more startup-focused.”

Near thinks the Greater Concord Chamber of Commerce could pick the brains of the chamber in Manchester, where he says startups are always part of the conversation. He’d also like to see an innovation lab developed at NHTI, his alma mater, similar to one at SNHU in Manchester. Concord doesn’t even have a makerspace for tinkerers to try out their pre-prototype ideas.

Near, 27, a Moultonborough native, is creating CyborgLabs in the Concord townhouse where he and his wife, Ashlee, live – a slightly nicer version of the “company born in a garage” story. He hopes that being part of Accelerate NH will let him shift to a higher gear.

Accelerate NH is one of several programs that have grown out of the state’s growing startup culture, mostly in Hillsborough and Rockingham counties. It’s a three-month program that helps people develop their companies, make connections and learn about operating businesses, assisted all along by a mentor. After the three-month session, the program invests $300,000 into the two most promising candidates.

As for Cyborg Lab, Near has a three-pronged approach. First, he’s about to roll out a free app to more accurately calculate the benefits of the wearer’s exercise by incorporating altitude as well as distance and time in reporting your run, walk or hike. Second, that will, he hopes, lead you to a dashboard application that combines all your exercise and health data into one place – and he hopes you’ll buy a holder from him to display it on your cellphone.

That will raise consumer confidence in the firm so we’ll buy what will be real products: a wearable breathing apparatus called FLO2, to boost energy for runners, which is in prototype form, and a drone backpack that won’t make you fly like Superman but could one day help you run like The Flash.

“I’ve always been fascinated with the integration of man and machine,” said Near, 27, explaining his motivation. He draws parallels to his Motocross experience: “On my bike, I could do stuff I can’t do in my organic form.”

FLO2 is like an X-Games version of those CPAP machines people wear at night to help them breathe. It helps people breathe while running or exercising, which frees up the surprising amount of work done by your lungs so your body can use that energy for other tasks.

It regulates air flow based on a clever design that measures the circumference of your torso; as you breathe in, your chest expands and the FLO2 compensates.

Halo, the drone backpack (“DronePack” is his trademarked term), is not, as I had assumed, a version of the personal jetpack that replaces engines with blades. The goal is to use the downward thrust of ducted electric fans to reduce your effective weight and help you do things like run up Mount Washington. He envisions users being able to dial in, say, Mars, and experience the effect of running and jumping in Martian gravity.

A native of Moultonborough, Near got his associate degree in mechanical engineering from NHTI, then went to work instead of going to UNH for a bachelor’s degree as he had planned.

Long fascinated by the idea of a startup, he was drawn to Manchester, where he jumped into the startup scene that has been built around the Millyard. He attended the Startup Shindig, met people like Dyn co-founder Jeremy Hitchcock (who told him his product needed a software component), and participated in an incubator before applying for the Accelerate NH.

So far, he said, he’s spent less than $25,000 on materials, plus many, many hours. He has gone the self-funding route, using money that he and wife made flipping houses and from their jobs – she’s a sales manager for a hospitality firm. He’s done a little fundraising on the friends-and-family circuit, but he’s reaching the point that real funding is necessary, hence the excitement about Accelerate NH.

“If I’m going to quit my job, sell my home, go nuts, I want to feel I can go after it with my whole heart,” he said.

If he can do it in Concord, so much the better.