Yeah this is a good, long-running blog – but check Cow Hampshire!

Blogs used to be cool and cutting edge but they’ve mostly fallen off people’s radar – the New Hampshire Press Association, for example, no longer awards a blog of the year prize because not enough actual news blogs exist.

GraniteGeek is unusual because this has been around for a dozen years, featuring multiple items every week (although you have to make my word for it: most of its early history was lost when I left the Nashua Telegraph). But this longevity is not unique in the state – consider Cow Hampshire.

That delightful blog about New Hampshire history, written from a bottom-up perspective, has also been around for a dozen years, with two or more posts each week, all of them well researched and well written. I was reminded of Cow Hampshire recently when NPR’s PlanetMoney show did a piece about Social Security numbers that discussed how the lowest possible number – 001-001-0001 – was issued to Grace Owen of Concord, N.H. (The first three SSN digits originally referenced where you were born, which means many people born in New Hampshire have numbers starting with 001.)

Owen died in 1975 but PlanetMoney interviewed her nieces, who they found only because they were given a heads-up by Janice Brown, author of Cow Hampshire. Brown wrote about her and how she got that weird SSN number a decade ago.

Cool! And when I realized the blog had just celebrated its 12th anniversary, I figured I’d do a story about it. No thanks, said Brown. “The more attention I get, the more requests I get for people asking me to help  with their research,” she said, and since cow Hampshire is purely a labor of love, with no ads and no plans to turn it into a book or other money-making venture, she’s happy with the traffic she gets.

“i just feel that history should be interesting. I write mostly about people who most people don’t know about,” she said. “I like to put a face to history.”

So let’s leave it at that, giving a tip of the hat to a seasoned blog pro – noting that her pieces can provide insight into topics of interest to the geek community, like  early N.H. aviation; the mother of forensic science; and food conservation during World War I, to name a few.  You can subscribe to it by email, so you won’t miss a trick.

One more minor item: Somebody, not Brown, created a Cow Hampshire Twitter feed dating back to 2010. It consists only of the word “yuh” re-tweeted every few days. Go figure. 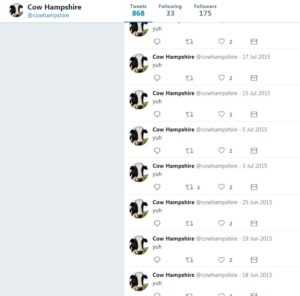