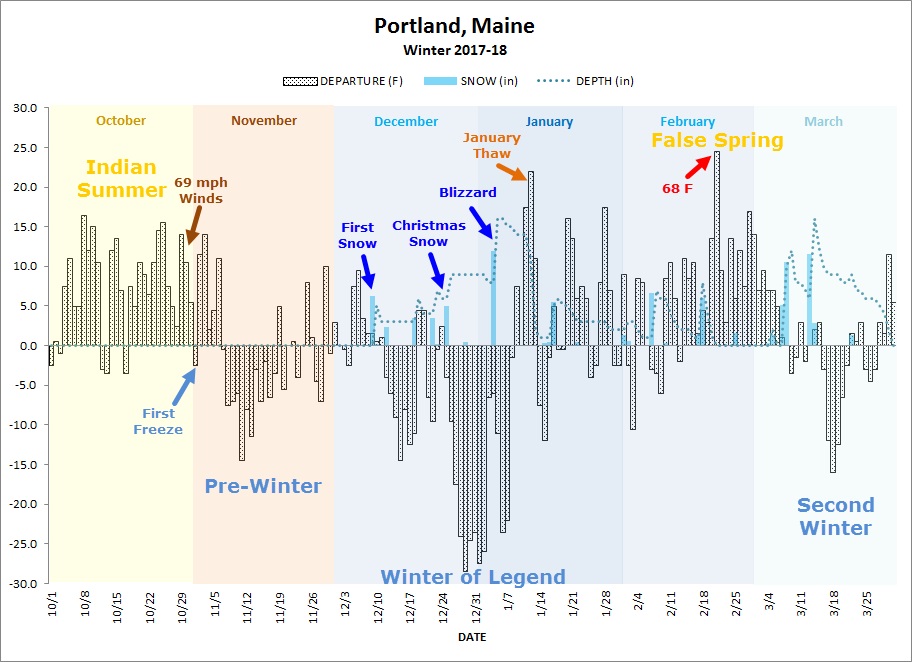 The above illustration was put together by the National Weather Service office in Gray, Maine, which also covers most of New Hampshire. It reflects the winter in Portland, but the general idea is the same throughout the Northeast. Here’s the accompanying writeup from their Facebook page:

After a record warm October, a series of strong storm systems brought heavy rain and very strong winds (gusting to 69 MPH at Portland). Soon after, much colder air arrived. This was just getting our feet wet for the winter to come! By New Year’s temperatures were taking the polar plunge! Extreme cold temperatures lasted for about two weeks, bracketed by a Christmas snowstorm and a blizzard at the beginning of January. Just when it seemed it couldn’t get any worse, the January thaw arrived, washing away much of that early season snow. February brought increasing warmth, culminating in the warmest temperatures ever observed in February. This period of Spring-like warmth melted the midwinter snow. But winter wasn’t done with us yet! Two more big snowstorms came in the first half of March with cold temperatures keeping that snow on the ground until the end of the month

Overall, however, Concord was warmer than normal: total heating-degree days (a measure of total amount of deviation above or below the long-term average) from Oct 17 to Mar 18 was 5,625 and the 30 year normal value is 6,012. Portland also had more heating-degree days than normal, but the swing wasn’t as great.