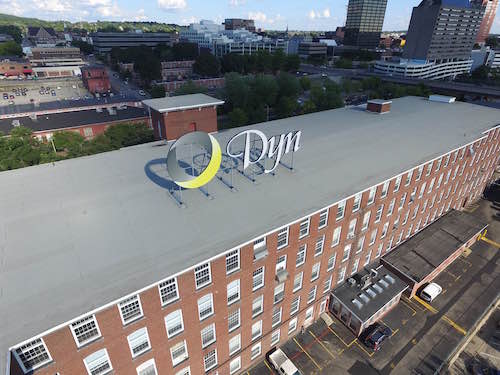 I noted on my Twitter feed last week that the Dyn sign atop the company’s Manchester building – which while other companies had rooftop signs, was the first big, in-your-face tech-startup branding on the Millyard – has gone and been replaced by a big, but less exciting Oracle sign. Oracle bought Dyn in late 2016, and I fretted from the start that the sign would be swapped out.

So what happened to the Dyn sign? The thread drew in Kyle York, a Dyn-er who’s now an Oracle VP, with potential bad news for Dyn sign fans:

This led to suspicion from an analyst who was part of the conversaion:

Which led to his statement from Dyn co-founder Jeremy Hitchcock that left us fans some hope that the sign will arise again like the phoenix, somewhere:

UPDATE: It’s a coincidence – correlation ain’t causation –  but ten minutes after I posted this post I got an email from Oracle PR saying: “Please join us for a celebratory event on the afternoon Tuesday, May 15 at the Oracle Dyn campus in Manchester. Senior executives will discuss the continued expansion of the Oracle Dyn Global Business Unit and our ongoing investment in New Hampshire. The event will feature an unveiling of the campus rebranding …”