Why are there two obelisks, really close to each other, marking the NH border with Canada? 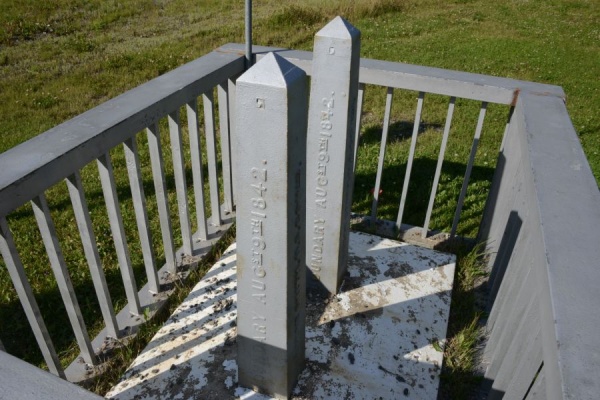 I was perusing a blog by a group called the Center for Land Use Interpretation that had an incredibly detailed description of the US-Canada border in Maine and New Hampshire (you can read it here), I found the above photo of a small monument at the border crossing in Pittsburg, N.H., the only Canada crossing in New Hampshire. It is “an unusual double monument on the border at New Hampshire’s only crossing, with two obelisks, 18 inches apart, emerging from a single concrete base.”

Why the two obelisks?

The explanation is an often told tale where two 19th century boundary surveying teams, coming from either direction, one Canadian and one American, met here, and found their lines differed by 18 inches. Rather than split the difference, two monuments were installed, #483, and #484. Eventually the bases of the monuments were cemented together, forming one official marker, surrounded by a fence, which further unites them.

This story of precision and international camaraderie turns out to be apocryphal. The more accurate version, according to an IBC Commissioner, is that they had an extra monument, and thought it would make a nice story.