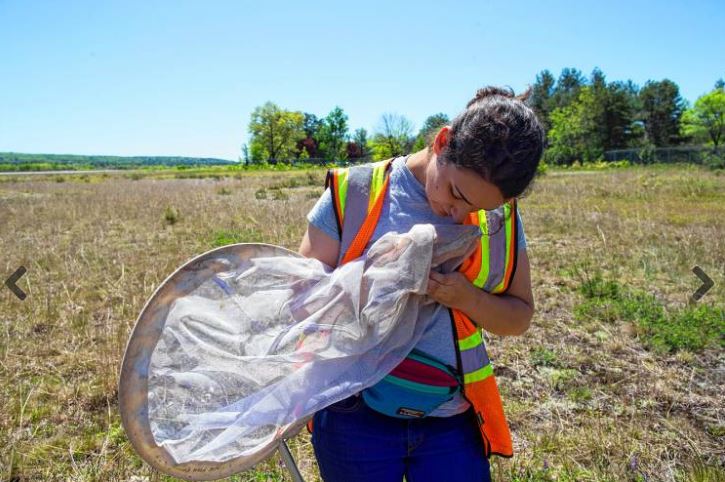 Heather Siart, a biologist with the New Hampshire Fish and Game Department, carefully grabs a frosted elfin butterfly she caught in a net in the pine barrens alongside the runway at Concord Municipal Airport on May 21, 2018. Geoff Forester, Monitor staff

If you drive past Concord Municipal Airport one afternoon and see somebody walking next to the runway quickly – but not too quickly – while waving a butterfly net, you probably think you know what they’re doing: Keeping tabs on the Karner blue.

It’s true that the Karner blue, our endangered state butterfly, loves the lupine flowers that grow in the pine barrens that have been preserved, largely by accident, around the airport. And it’s true that Concord Airport has long been the centerpiece of the state’s effort to re-establish this dazzling little beast.

But right now the airport is also home to a parallel effort, trying to use the research skills and laboratory equipment developed to save the Karner blue in order to help a drabber relative called the frosted elfin butterfly.

“Sometimes they can be a sneaky little butterfly,” said Heather Siart, a seasonal biologist for New Hampshire Fish and Game who was wielding a butterfly net Monday, plopping it over plants when she had spotted a frosted elfin.

Many butterflies fly upward when disturbed, but the frosted elfin is just as likely to hide among the vegetation, which can complicate things.

“I know that I caught you but I can’t find you,” Siart muttered, peering through the netting.

The butterflies that Siart did catch were carefully held in tweezers while she wrote a tiny three-digit number on them using a fine-point Sharpie, an identification mark that lets researchers know when they have a repeat capture, one of the major factors in estimating wildlife population size. Since the insects’ total wingspan barely extends an inch, that job isn’t easy.

“We made them practice writing numbers in little squares, over and over,” said Heidi Holman, wildlife diversity biologist with the New Hampshire Fish and Game Department, who is overseeing the frosted elfin project. “It takes training.”

That’s not the only obscure skill necessary. Another is how to capture and hold a fragile subject like a butterfly without harming it. Staff must demonstrate this on at least 20 members of non-rare butterfly species before they can target the rare ones.

Then there’s the ability to walk at the necessary measured pace while collecting samples. That is necessary so the results of one day’s effort can be compared to a day’s sampling from last month, last year, next month, or maybe 10 years from now, giving an accurate picture of population change over time

“If you inch along to capture every single possible individual, you’ll overestimate,” said Holman. One of Siart’s contributions to the project, she said, was to establish protocols including how long to take over each sampling session. (In case you’re wondering: seven minutes if no butterflies are found; up to 25 minutes otherwise.)

Counting individuals in the wild is only part of this program, however.

In a former barracks building on the National Guard compound across the street, a laboratory established to breed the Karner blue now hosts scores of frosted elfins, each living inside one of those red cups familiar from cookouts and college parties.

They live in this protected environment for 10 days or even longer – far more than frosted elfins last in the wild – munching on lupines and laying as many as 200 eggs that will eventually, after going through the miraculous metamorphosis of the butterfly life cycle, produce adults to be released into the wild.

What’s perhaps surprising about all this effort is that unlike the Karner blue butterfly, the frosted elfin has not been recognized as an endangered or threatened species by either the federal or state government, even if its dependence on disappearing pine barrens makes it vulnerable. The federal government is expected to make a decision about its status by 2023.

Getting ahead of that status, to learn more about its life cycle and perhaps boost its numbers, is the whole idea, Holman said. New Hampshire wants to protect and help species before their population gets so small or scattered that the federal government needs to declare it as threatened or endangered – because by then it is far more difficult and expensive, maybe even impossible, to turn things around.

“We’re trying to take what we have learned from intensely studied species and tackle problems for other species before they get to that point,” Holman said. “You don’t want to wait.” 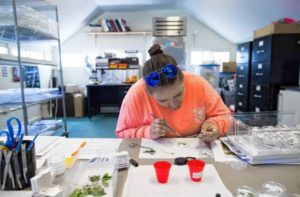 Rebbeca Segelhurst, a biology aide at the New Hampshire Fish and Game research lab on the National Guard grounds in Concord, checks for eggs and larvae from captive frosted elfin butterflies on May 21, 2018. Geoff Forester, Monitor staff

The overlap of Karner blue and frosted elfin butterflies provides a good test case, she said.

When the restoration project began at the airport in 2000, the Karner blue butterfly was thought to have been extirpated, meaning not found in New Hampshire. Over time, the team has learned to rear and release butterflies in the captive breeding lab on the National Guard grounds, starting with a few individuals brought in from New York state. And it has studied and developed protocols for different land-management techniques such as burning or mowing to keep the right mix of butterfly-friendly plants on site.

The result is that the Karber blue population on roughly 150 acres of managed property is now about 3,000 individual butterflies. That figure was the original goal, although Holman said it’s not clear that the population is stable enough from year to year for concern to be lifted.

Biologists have previously counted the frosted elfin population on the preserve, which covers a total of about 450 acres around the airport and National Guard facility, as part of monitoring the ecosystem, although they have not previously studied the species’ life cycle as they are doing this year.

It appears to be doing reasonably well, since this year’s sampling has been about double the number of any previous year. That seems to indicate that the work designed helping the Karner blue is helping the frosted elfin, as well, which is exactly the sort of add-on benefit that conservation efforts often produce.

It’s not that simple, however – conservation rarely is.

For example, frosted elfins don’t do as well as Karner blues after a land parcel is burned, perhaps because they make more use than Karner blues of the scruffy ground cover that gets cleared away by fire. In order to boost both species, the schedule of prescribed burning may have to be tweaked further.

Unlike the Karner blue butterfly, which is found in very few places and depends upon lupines, the frosted elfin butterfly can survive on a second species of plant – the indigo – and is found in about 400 sites around the country. But its numbers are not huge and in many cases it’s not clear how many of them live in any one location, so the expertise being acquired by Fish and Game researchers and technicians may be able to pay off elsewhere.

The Concord site is the only captive-breeding site for these butterflies east of Ohio. Holman said there are discussions about sending frosted elfins bred and raised in Concord to other states where the species is struggling. In return, of course, New Hampshire could benefit from ideas or technologies or protocols, or even breeding populations, elsewhere.

“We’re trying to approach this from a regional standpoint, so that every state isn’t repeating the job that others are doing,” she said.