A bridge too wild? Footbridge in Pemi Wilderness won’t be replaced 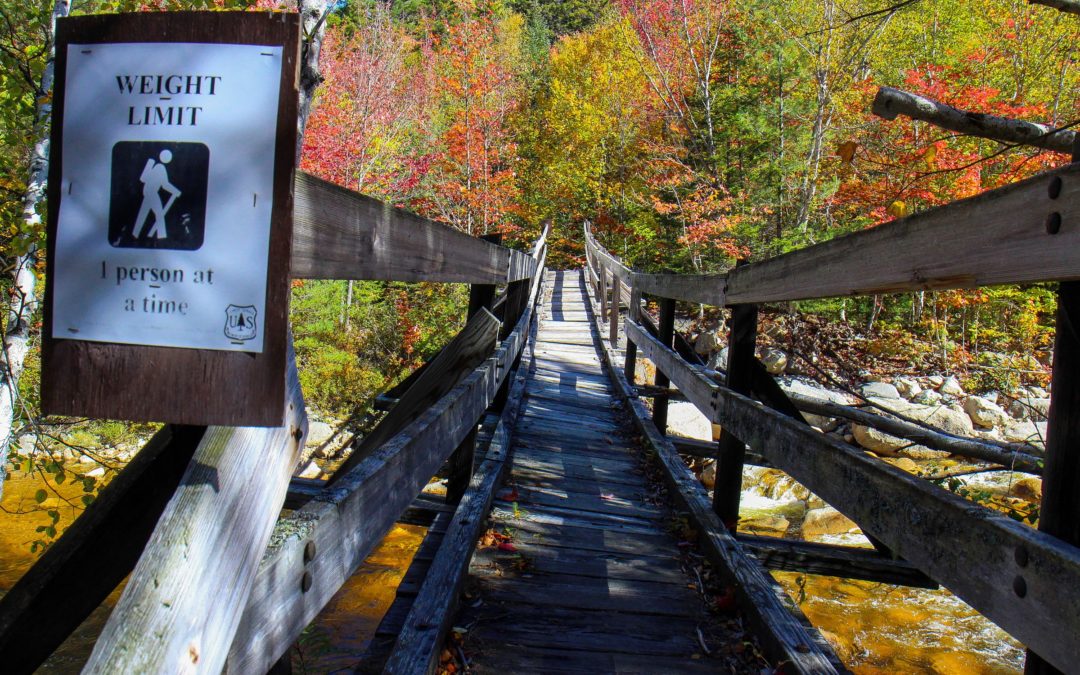 That’s roughly the argument which has been raging around the Thoreau Falls Bridge in the Pemigewasett Wilderness since it was damaged by Hurricane Irene in 2011. Yesterday the White Mountain National Forest said the bridge won’t be replaced, Here’s my story from today’s Monitor:

The dilapidated Thoreau Falls Bridge which provides a rare river crossing in the Pemigewasset Wilderness will be removed but not replaced in order to maintain the wilderness experience, federal authorities have decided – a decision that will anger many New Hampshire outdoors enthusiasts and delight many others.

“Wilderness is intended to be protected and managed to preserve its natural conditions, where you have to accept nature entirely on its own terms, with the imprint of man’s work substantially unnoticeable. Removing the Thoreau Falls Bridge will assure all of us that this opportunity is available, here in the largest wilderness area in the Northeast United States,” wrote Brooke Brown, the Pemigewasset District Ranger, in the 26-page draft decision released Thursday.

The decision will be open to comment for 45 days. Judging from the heated debate over the future of the bridge that has occurred in the past two years, a lot of comments are likely to come in.

If no change is made, the bridge will be taken apart with hand tools in late summer or early fall, with the concrete abutments left in place “and allowed to decompose over time,” the report said. 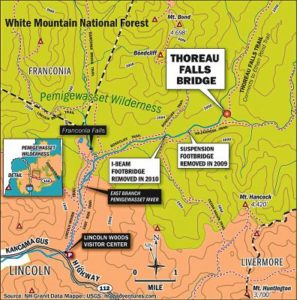 Those portions of wood treated with creosote, including the huge trees that hold it up, will be hauled out or flown up during “up to two helicopter trips,” while untreated wood will be chopped up and burned on site. The process is expected to take five days.

The adjacent hiking trail would keep its alignment “and users would ford the river using their own discretion,” the report said.

Thoreau Falls Bridge is a footbridge built in 1962 on a pair of 60-foot logs spanning the East Branch of the Pemigewasset River. The river is difficult or dangerous to cross during high water times in spring, and during the winter when it rarely freezes completely. The bridge connects the northern and southern sections of the Pemigewasset Wilderness Area, 45,000 acres of the White Mountain National Forest between Franconia Notch and Crawford Notch.

Thoreau Falls Bridge was damaged by raging waters created by Hurricane Irene in 2011. The White Mountain National Forest put up warning signs saying only one person at a time should cross it, and in 2015 began a public discussion about whether to replace the bridge or remove it.

The issue has divided outdoors advocates. The Appalachian Mountain Club, for example, wants the bridge replaced to allow continued access to the heart of what is often called the Pemi Wilderness, while the national group Wilderness Watch wants it removed, saying that building structures in a wilderness area goes against the idea of creating a place where people can escape civilization.

Another prominent advocate of replacing the bridge is Sen. Jeb Bradley, R-Wolfeboro, the Legislature’s best-known hiker, having summited all 48 of the state’s 4,000-footers during all 12 months of the year. He has often argued that without the bridge, few people will be able to make it to the heart of the Pemi Wilderness, especially in winter, and that its loss would lead more people to expose themselves to danger by attempting to ford the river.

The Pemi Wilderness is covered by the federal Wilderness Act, although the Thoreau Falls Bridge was built two years before that act was passed by Congress. The area was added to the Wilderness Preservation System through the New Hampshire Wilderness Act of 1984.

The federal Wilderness Act in general does not allow large structures like bridges to be built in wilderness areas and says construction must use local materials. That doesn’t seem possible in this case: There are no nearby trees big enough to replace the logs that supported the bridge, which were probably hauled in by horses from outside the region and were treated with creosote, which wouldn’t be allowed today. Building a new bridge would require bringing in pressure-treated lumber trusses, probably by helicopter.

Even the question of what has been done in similar situations is not straightforward.

A suspension bridge over the Dry River in the Dry River Wilderness Area in northeastern New Hampshire was rebuilt in 2009 for the same reasons that advocates urge the Thoreau Falls Bridge be rebuilt. On the other hand, a suspension bridge downstream of the East Branch of the Pemigewasset River was not replaced after it was removed due to damage in 2010, nor was a nearby beam bridge over Black Brook. Both of those decisions were made to preserve the wilderness aspect.

In discussing her decision in the draft report, Brown says that finances were part of it:

“(I had to) consider the financial cost of replacement and the long-term maintenance of this kind of infrastructure in a wilderness area, on a trail determined to have moderate use. Working within our allocation, we must be strategic in where we commit taxpayer dollars. … I believe future investment in new infrastructure in the wilderness is simply not prudent – financially or philosophically.”

In response to safety concerns, she writes, “The one reference to safety in the (federal Wilderness) Act refers to responding to an emergency situation, not the prevention of risk.”

“There are numerous water crossings within the wilderness that would be hazardous during high water, the crossing at Thoreau Falls Bridge is but one. … So, you alter your plan or you come back when these crossings are fordable – in other words, you meet nature on its terms and are reminded you are but a visitor,” she writes.