Welcome to The Leafhopper State! 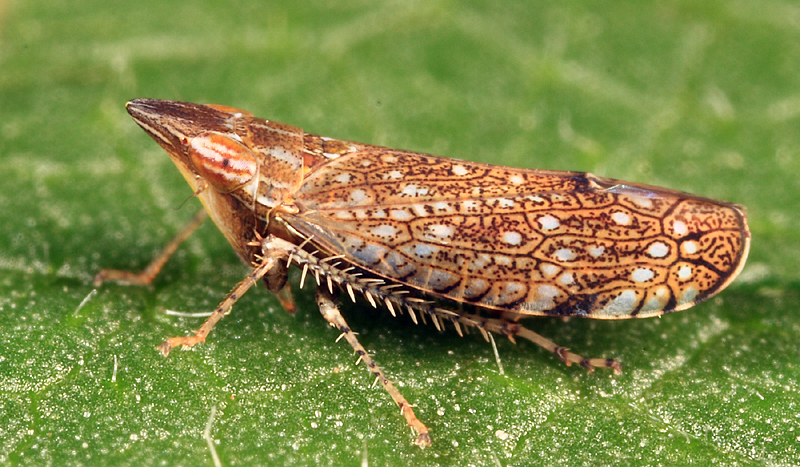 Sharp-nosed leafhopper, is one of more than 600 species found in New Hampshire. Credit: Donald Chandler/UNH

From UNH News Service: Granite Staters sometimes quip that New Hampshire is the center of the universe, but is it also the center of the leafhopper universe? Three decades of research by scientists with the New Hampshire Agricultural Experiment Station at the University of New Hampshire show that the state has more than 600 species of leafhoppers, or Cicadellidae, clearly surpassing the next largest family of insects documented in the UNH Insect Collection.

“Leafhoppers are an important economic group, particularly for some tree crops such as peaches and cherries that are tremendously valuable products,” said Donald Chandler, entomologist and professor of zoology, who curates the UNH Insect Collection. “There are important diseases that are carried only by the leafhoppers that can devastate orchards and fruits, vegetables, and cut flowers.” 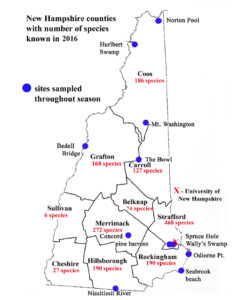 Scientists with the New Hampshire Agricultural Experiment Station at UNH have found more than 600 species of leafhoppers in the state, clearly surpassing the next largest family of insects documented in the UNH Insect Collection. Credit: Donald Chandler/UNH

The leafhopper fauna of New Hampshire was first documented by Philip Lowry in 1933 who found 237 species, mainly from the Seacoast Region and the White Mountain area. Thanks to projects funded by the NH Agricultural Experiment Station from 1981 to 1993, 11 unique and/or natural areas at diverse locations in the state were intensively sampled throughout their seasons.

A more recent project focused on the leafhoppers associated with farms that are organic or are managed by integrated pest management, with the goal of determining abundances of the pest species and the most effective means of sampling to document their presence and abundances. At the end of this last project, the total number of species known from the state was 605, with 287 being newly recorded in the state.

Of those roughly 600 species of leafhoppers, only about 40 were economically significant because they either carried diseases or fed heavily on plants. Leafhoppers are well-known for the problem heavy feeding creates for many crops, ornamental shrubs and trees, and flowers, with two species once engendering common names such as the inimical leafhopper and the destructive leafhopper.

In New Hampshire, Strafford County has the greatest number of leafhopper species with 468. Merrimack County has 272 documented species and Rockingham, Hillsborough, Grafton and Coos counties have nearly 200 each. 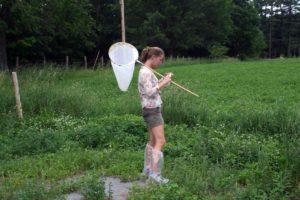 Presence of such a large number of species prompts the question: Why are there so many leafhopper species in New Hampshire? Is New Hampshire truly the center of North American leafhopper diversity?

“It is unlikely. There is no reason why Maine or Illinois wouldn’t have just as many or more species,” said Chandler. “New Hampshire and Maine were essentially scraped clear by the glaciers of 10,000 plus years ago, and our current flora and fauna are all ‘recent’ immigrants. New Hampshire’s relatively high diversity is at least in part due to a lack of targeted sampling in adjacent states. Still, New Hampshire is surprisingly diverse. In comparison with the Plains states, the range of habitats is extreme and will therefore support a maximally diverse fauna. Canada, in its entirety, has 1,088 species while being more than 100,000 times larger than New Hampshire.”

In addition, another factor potentially producing high diversity in New Hampshire is based on the seasonal summer movement of small leafhoppers and many other arthropods (aerial plankton) to New Hampshire (and Maine) due to the prevailing winds and storm fronts that move from the southern states to the Northeast/New England regions.

According to Chandler, this phenomenon has been well documented for pest species such as the potato leafhopper and aster leafhopper. But discovery in late summer of single individual species such as the avocado leafhopper, a leafhopper that feeds on persimmon, and another that feeds on Possum haw, far from the range of their normal hosts, is strongly suggestive that chance aerial dispersal adds to the species count for the state.

“For those entomologists who love natural history, leafhoppers provide a wonderful opportunity to document plant-insect associations, learn how to identify plants, and learn how to identify leafhoppers. They don’t bite or sting, and sampling is best done on warm, sunny days with no wind. How could you pass that up? See if you can surpass the count of 139 leafhopper species from my yard,” Chandler said.

This material is based upon work supported by the NH Agricultural Experiment Station, through joint funding of the National Institute of Food and Agriculture, U.S. Department of Agriculture, under award number 0223363, and the state of New Hampshire.