You can’t make decisions without data: The Air Pollution Edition 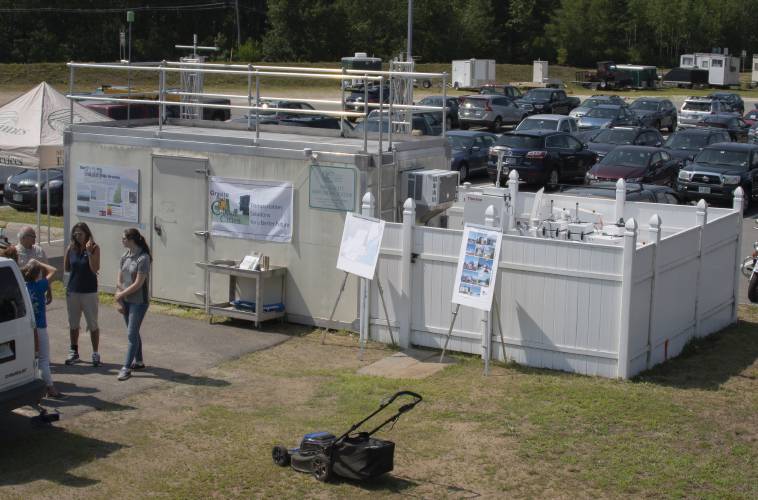 When you operate devices to measure pollution all over New Hampshire, you find a lot of bad news, like ozone pollution from cars in summer and smoke from woodstoves in winter.

But sometimes you find good news, too.

“Carbon monoxide used to be an issue in urban areas – Nashua, Manchester – but it hasn’t been for years” said Kendall Perkins, manager of the air monitoring program for the New Hampshire Department of Environmental Services. The requirement that cars install catalytic converters mostly solved that problem, Perkins said.

Results of a different pollution control system are also visible: Since $450 million “scrubbers” were installed on the coal-fired Merrimack Station power plant in Bow in 2011, Perkins said, the amount of sulfur dioxide in the air has declined so much that it usually can’t be measured.

And even bad news can have good consequences. The closure of the huge paper mills in Berlin in 2006 was an economic disaster for the North Country, but the air got so clean that after a couple of years the state closed the air monitoring station there and moved it to a place where its results would be more telling.

Perkins gave these examples last week during an open house at the air monitoring station in Concord, located alongside the DES building on Hazen Drive.

The event also let DES pitch the benefits of electric vehicles and equipment that produce no tailpipe emissions. Scores of people came by during the open house to try out electric lawnmowers and weed whackers and see a Chevy Volt, an electric-and-gasoline car lent by Banks Chevrolet of Concord.

As Perkins explained it, the state’s air monitoring program dates back to the 1970s, after the federal Clean Air Act came into being and money became available to keep track of what air pollution was happening and how it was moving around – information that helps focus decisions on how to best spend taxpayer dollars to improve health and the environment.

The state now has 13 monitoring stations, from Keene to Nashua to the Seacoast to the summit of Mount Washington. They include one in Pembroke, located there to keep track of pollutants from the Merrimack Station power plant, and one in Laconia as well as the Concord location.

The stations don’t all study the same pollutants, and they definitely don’t look the same. In image-conscious Portsmouth, for example, DES has to put gray cedar shingles on the outside of the monitoring station so it will fit in, whereas more industrial locations can get away with a construction trailer.

However, the basic idea is the same for each: Pull in some passing air and either run it through filters to snag particles or run it past gas-analyzing devices to measure such things as ozone, nitrogen oxides, carbon monoxide and sulfur dioxide. Most of the data is sent over the internet or cellphone signals to laboratories for compilation and analysis, although some older particulate systems require staff to collect filters and bring them back to the lab.

Different sites measure different things partly to control costs – a monitoring unit for a single pollutant can cost $20,000 to $40,000 or more, Perkins said – and partly because different locations have different concerns.

Keene, for example, has perhaps the state’s biggest problem with particulate pollution in winter because of geography: Surrounding hills and mountains can trap smoke from wood-burning stoves, building up pollution. This makes it important for Keene to measure the smallest and most dangerous particles, known as PM2.5.

Not too far away, the monitoring station atop Pack Monadnock mountain in Miller State Park measures almost everything. It is among the first places in the state to be hit by winds coming in from the west and south, which can carry pollution from cars in cities like New York and from coal-burning power plants in the Midwest. Having complete pollution data there provides the background that helps pinpoint when new pollution is added by sources in the state.

“Unless we get the right mix of meteorology, we’re pretty good in New Hampshire,” he said.

And we’ve got the monitoring data to prove it.