This 3,000-year-old technology is still used at industrial scale 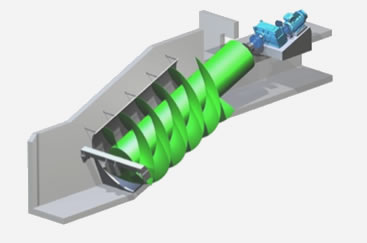 The Archimedes Screw is one of the basic simple machines of proto-technology and except for the inclined plane (which to my mind is too simple to be considered a machine, no matter what they say!) is probably the one still used the most at industrial scale. It’s such a large screw shape that turns to move liquids up or down an inclined trough – not quickly but steadily and at great volume. The technology predates Archimedes, who lived in the 2nd century AD, by at least 1,000 years.

I mention this because I just found that there is an Archimedes screw hydropower plant in Connecticut, although it is currently turned off due to equipment problems. (Story from the local paper is here.)  Basically, instead of sending water from one side of the dam down through spinning turbines that produce power, it sends it through an Archimedes screw that turns to produce power. It’s much safer for fish, which can travel through the screw without being chopped up because of it turns more slowly, and in theory should be cheaper to build and maintain. The fact that so fw of them exist in the world seems to indicate that its theoretical benefits don’t always pan out in the real world, but perhaps the shortage is more a factor of engineering inertia and financing.

Archimedes screws are usually used to move water uphill. There’s an excellent example in Concord, which has three big ones that bring the initial raw sewage into the treatment plant, where gravity can feed it down through the treatment process. One of them was being repaired when I visited the plant so its cover was off and you could see it in all its spiral glory. Here it is – note the person at the top, for scale: 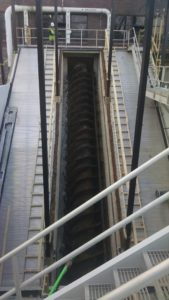 One of the Archimedes screws at the Concord (NH) wastewater treatment plant.