We are ‘abnormally dry’ and record wet at the same time

(Give you ears a treat: You can listen to me talk about this story on the low-budget Granite Geek podcast)

“There is a time lapse in how different systems respond to current conditions,” is how Richard Kiah, chief of Hydrologic Network Operations for the regional office of the U.S. Geological Survey, puts it. 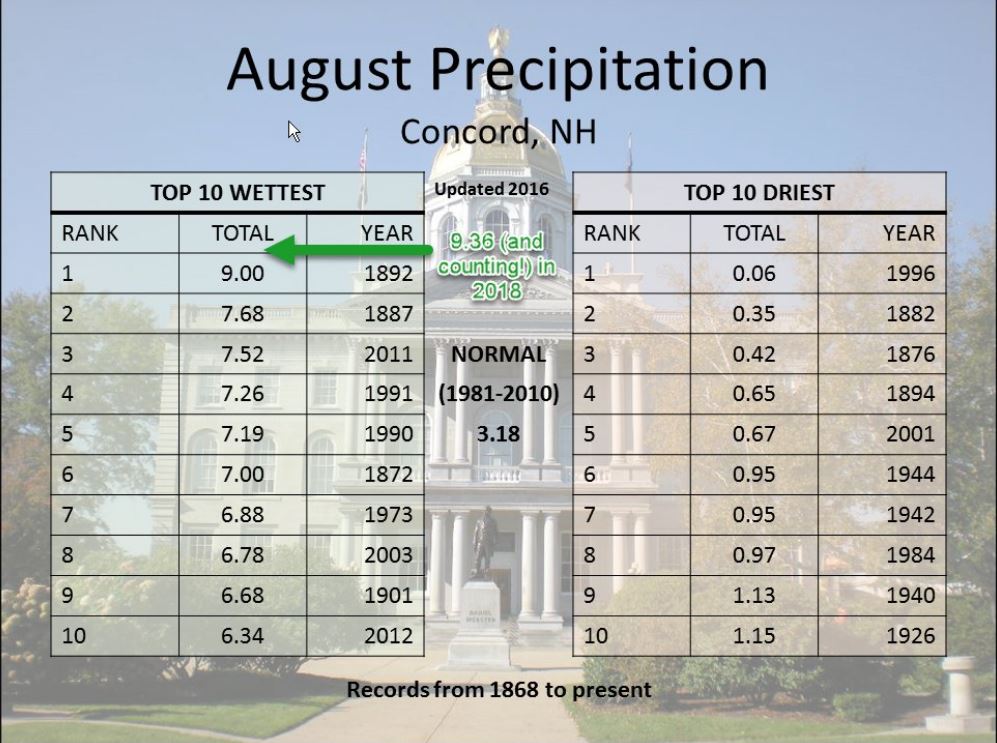 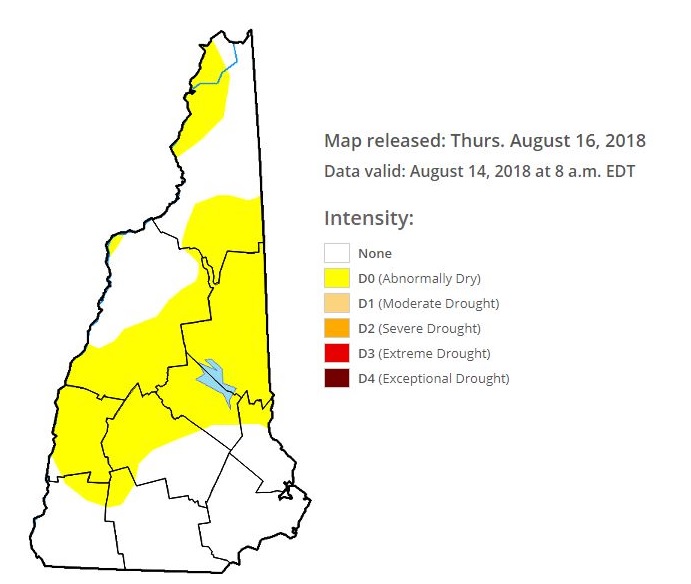 In laymen’s terms: When wet weather appears, as it did in July, after a long stretch of very dry weather like we had this spring, the grass starts growing pretty quickly but it takes longer to fill up the aquifers that our wells depend on. A drought above ground might end, might even give way to flooding, while drought lingers below ground.

That’s roughly what we’re seeing now, although thankfully the drought and flooding have been minor compared to other parts of the country.

As of Saturday, the official rainfall total in Concord for the month of August is 9.36 inches, breaking the all-time August record of 9 inches, set in 1892. Even so, Concord and the swath of central New Hampshire from Sullivan County to Carroll County are officially “abnormally dry,” the first of five categories on the federal drought-measurement scale.

This discrepancy is a function of the “time lapse” that Kiah mentioned above. As an illustration, he pointed to the town of Warner.

USGS maintains a series of measuring devices around the state that keep track of groundwater levels, meaning how much water is available for wells, and other devices that measure how much is flowing on the surface in rivers. Warner has a stream gauge measuring flow on the Warner River, and also a groundwater well nearby.

At the end of March, which is roughly when the dry spell began, the stream gauge in Warner was measuring water flow above the 95th percentile point for that time of year, meaning more water was flowing in the river than almost late March in history. The groundwater level was almost that high as well: It was in the 90th percentile.

By mid-July, after two months of bone-dry weather, the surface stream gauge had plunged almost to the 10th percentile, meaning that nearly nine out of 10 past Julys had seen more water in the river, definitely a drought signal. Yet at the same time, groundwater gauge was still in the “normal” range, just slightly under the long-term average.

Both gauges are now trending upwards, and I would guess that in the next few weeks central New Hampshire will be out of the drought category entirely, as they are already in southern New Hampshire. It’s not straightforward, though.

The designation of drought requires more than just measuring recent rainfall or water flows. Other factors intrude, notably evapotranspiration, which is the measure of how much of the moisture falling from the ground and existing in the air as humidity is used by plants.

“At this time of year, some of the rainfall is not going to be recharging the groundwater, it’s going to be taken up by the plants and trees,” Kiah said. So even if a wet period is good for plants, fixing the agricultural drought, it may not be all that good for long-term water supplies.

But probably not. That would confuse people more than enlighten them.

After all, designating a drought is as much a social and political marker as a scientific marker. It gives governments authority to impose watering bans and it motivates people to save water. Even if it isn’t always logically consistent, it’s still useful.