From fruit thieves to road kill, those $%^#! squirrels are everywhere 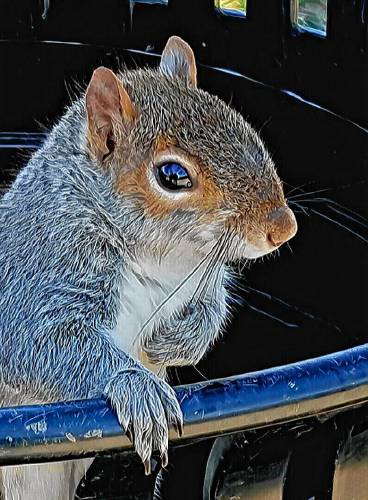 All your fruits are belong to me!

(Squirrels and chipmunks wiped out my raspberries and peaches and blueberries this year – they are a plague. Road kill is justifiable payback.)

The population explosion of squirrels and other small rodents in New Hampshire is proving to be a nuisance in more ways than one: First they ate all our fruits and vegetables, now their bodies are littering our roads.

“It’s the worst year I’ve ever seen for them – ever,” said George Hamilton of UNH Extension, the state’s longtime expert for all things related to fruits and vegetables.

“I was at an orchard a month ago, and we were watching squirrels go down, pick a peach off a tree, take it back somewhere, then go back down and pick another. We weren’t 20 feet away. I’ve never seen anything so brazen,” he marveled.

At the Extension’s education office in Goffstown, the news is the same.

“I have to say we’ve been getting a ridiculous number of calls about squirrels – meaning gray squirrels, red squirrels, chipmunks,” said Emma Erler, education center program coordinator. “They were chewing the shoulders off of apples or eating the whole apple, taking immature peaches and plums off the trees before they even had a chance to get ripe. … People are frustrated.”

This rodent population explosion is most likely the result of an explosion in “mast,” the biologists’ term for natural woodland foods like nuts and berries – in particular, the 2017 season for “hard mast” such as acorns.

“We collect mast surveys – hard mast, soft mast. The last couple of years the acorn crop has been really high. When that happens, squirrel reproduction will pick up, so there’s a lot of squirrels around,” said Karen Bordeau, a wildlife biologist with the New Hampshire Fish and Game Department.

Then came the drought that started in spring and early summer, which cut into the natural production of “soft mast” like flowers and early berries. So the rodent hordes turned their attention to artificial soft mast in orchards and berry farms and gardens, much to humans’ dismay.

The rains that arrived in July largely solved that problem, although too late for many crops. Now that summer is winding down, another effect is showing up: road kill.

The Monitor newsroom, like many locations, has received anecdotal reports of an unusual number of dead squirrels all over the state’s roads and highways.

It’s hard to get official confirmation of this phenomenon, however. Concord’s street department, for example, will respond to resident reports of larger animals hit by cars but it doesn’t clean up dead squirrels or chipmunks, said Jeff Hoadley, deputy director of General Services for the city. Hoadley can’t confirm any increase in road kill but he agrees that it sure seems that way.

Bordeau, the biologist, agreed. “People comment that they’re seeing a lot of it,” she said. She thinks she knows why.

Lots more squirrels and other little rodents on the move means lots more of them to be run over.

Aside from any revenge factor from disgruntled gardeners, a road kill bonanza is a benefit for the state’s scavengers.

“With all the crows and ravens and turkey vultures, they clean it up pretty fast,” said Bordeau. “Everything’s tied to food, what you can find, what you can access.”