The science establishment doesn’t support the Ig Nobels (for shame!) 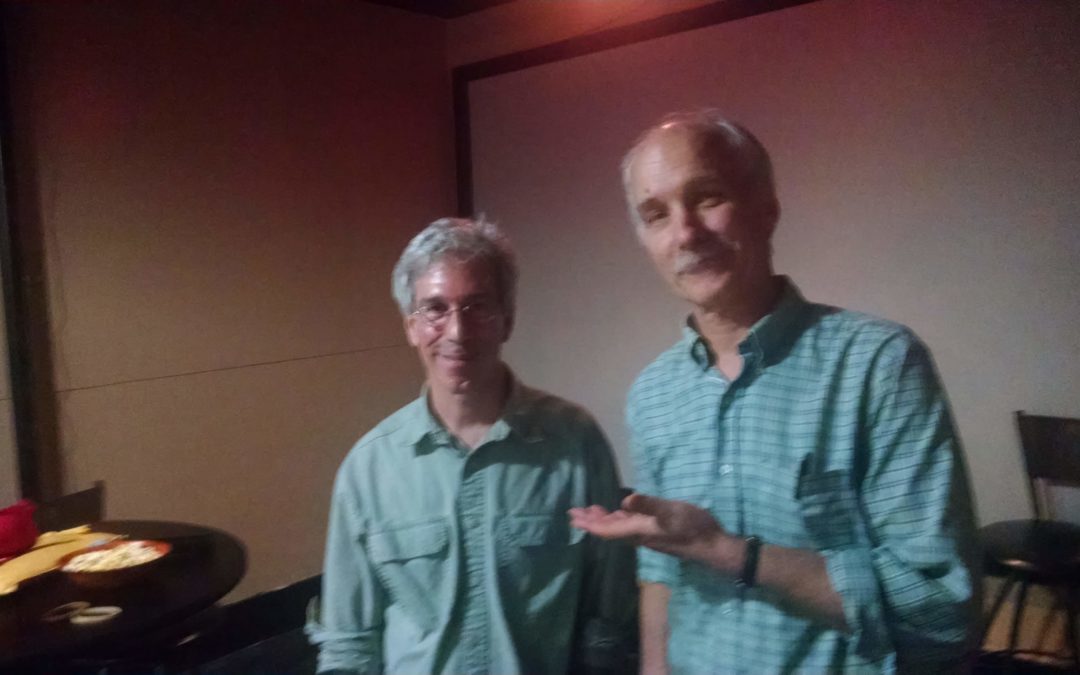 Marc Abrahams and me, taken by an amateur using a cell phone in bad lighting.

Marc Abrahams, founder of the Ig Nobel Awards, drew a standing-room-only crowd to Science Cafe NH in Concord last night – in fact, we had to turn a few people away. I can’t take notes while moderating so I can’t give you a blow-by-blow of the two entertaining hours, but a couple things stuck in my mind. (The video shot by ConcordTV will be online in a week or so at their Science Cafe site.)

I asked Marc about the finances of his odd empire, which includes the Annals of Improbable Research magazine and the Ig Nobels. He jets around the world talking to people and holding Ig-like events, and has been doing this for more than 20 years, but I didn’t think that magazine subscriptions (it has no ads) and tickets sales would bring in all that much money (Sanders Theater holds 1,100 people and tickets average around $75, so that’s only 80 grand or so, and putting on the award show can’t be cheap) . Abrahams said he’s the only paid employee, and added one bit of financial information: Unlike last night’s freebie event, some of the places who invite him to speak pay him real money, which justifies the overseas travel.

Surprisingly, and a bit depressingly, he said he gets almost no grants or financial support from science organizations dedicated to public outreach; the sole exception being the Gordon and Betty Moore Foundation (that’s Gordon Moore as in Intel). That seems silly to me in these anti-science days, since  the National Science Foundation now requires an outreach component for most of its grants; getting people “to laugh, and then think” at the Ig Nobel Awards sounds like a great form of outreach. Abrahams said American science is too “earnest” – it thinks that if people are laughing, something is wrong.

There was a question about where winners come from. Abrahams said that while the U.S. has connections to many winners, largely because so many researchers come through our universities at some point in their career, the two countries that punch above their weight are the UK and Japan. Why them? Because they both embrace eccentrics, and eccentric work draws the attention of the throng of judges who chooses Ig Nobel winners.