Is biomass power good or bad for the environment? The answer is … 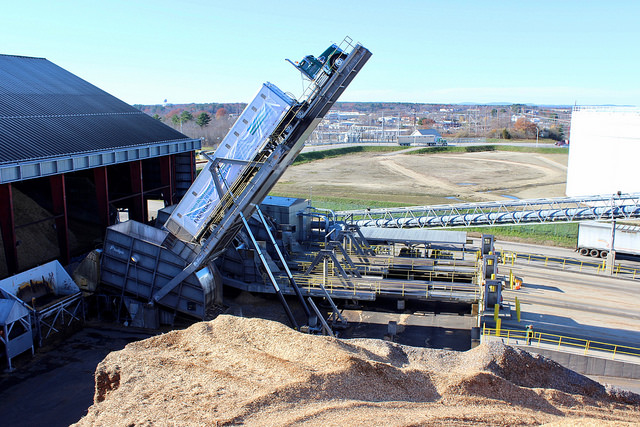 The best part of big biomass power plants is how they get the wood chips out of the trucks. (Eversource photo)

As you may have heard, there is great debate at the moment about how and whether to support biomass energy, a fancy term for burning chopped-up trees to generate heat and power.

The debate centers on a complex tangle of economic questions involving jobs and costs. But there’s also an environmental side to it, which is just as tangled.

In advance of Thursday’s vote by the Legislature – they’re deciding whether to override the governor’s veto of bills that support existing biomass electricity plants – here are what years of reporting on the question has led me to believe are the three key points in deciding whether biomass energy should be seen as environmentally “good” or “bad.” I’ll give my conclusions at the end.

How is it harvested and used?

In New England, the majority of the biomass burned for power and heat is pretty sustainable, mostly consisting of trees or the portions of trees that can’t be turned into more profitable lumber or firewood. Since the trees would have been cut anyway, the damage is minimal – although it’s not zero, because leaving behind leftover bits of the harvest, known as “the slash,” can help wildlife and long-term forest health.

This contrasts to the Southeast, where huge timber farms have been developed to feed Europe’s desire for wood pellets. As with many large agricultural systems, economic wishes override environmental concerns and many people are concerned about turning forests into the arboreal equivalent of a monoculture. That system is very unlikely to ever happen up here, however.

There’s also the climate change argument. Biomass is recyclable over 20- or 30-year periods, if done properly. A big reason many support biomass power is that trees can be regrown and remove the carbon from the atmosphere that was produced when we burned their predecessors – something you can’t do with oil or coal.

As for how the wood is used, burning it to produce electricity, as compared to producing heat or both electricity and heat in what is known as “combined heat and power,” is the least effective use of biomass. That’s a strike against most of the state’s existing biomass power plants, which have no obvious method to make use of their waste heat. This is particularly bad because wood is not very energy dense, meaning we have to burn a lot more of it than we would of fossil fuels to produce the same energy.

Another environmental issue is that biomass often produces more local pollution than fossil fuels. My modern, efficient pellet stove is a good example: When it starts up, it creates such a burst of smoke that a town cop who was passing by once stopped to make sure my house wasn’t on fire. Keene’s ongoing attempts to get people to upgrade their wood stoves also reflects this issue, because stove smoke collects in the valley and causes air-pollution alerts.

These factors, combined with recent research indicating that any logging in mature forests releases more carbon from the soils of mature forests than had been realized, explain why some serious research in recent years has said that biomass power can be as environmentally damaging as even coal, in some circumstances. The old days when biomass was automatically thought to be “green” are definitely over.

What happens to the biomass otherwise?

Now we’re getting into the land of the hypothetical, where I think you’ll find is the strongest environmental argument in favor of supporting biomass energy.

Foresters argue that the extra income from biomass energy is important if we want our forests managed properly. And our forests do have to be managed, whether we like it or not. Centuries of logging and burning and acid rain and invasive species and climate change mean there are no natural forests anymore, not even deep in the Pemigewasset Wilderness.

Without biomass income, foresters say they will have to start “high-grading” woodlots, in which every single good tree is cut to cover costs, leaving weakened, inferior forests that aren’t good for wildlife or carbon sequestration. Or else they won’t bid on forestry jobs at all, which sounds good but isn’t.

If woodland owners can’t get income from a local timber harvest every couple of decades, they’ll have much more incentive to sell the land so something can be built on it, which is the worst case from an environmental point of view.

So it’s very possible that without a good biomass market, our forests will end up in worse shape.

What happens to the grid otherwise?

Right now every megawatt that biomass doesn’t produce in New Hampshire is replaced by, on average, about four-tenths of a megawatt of electricity generated by natural gas, a quarter megawatt produced by atomic power, one-sixth of a megawatt imported from outside New England, and roughly one-sixth of a megawatt from renewables including wind, solar, hydropower and burning trash or landfill gas for energy. Only a couple percentage points of our electricity comes from burning coal and oil any more – hooray!

What this means is that reducing biomass power in New England will do more to boost natural gas than to boost solar or wind or hydropower, at least in the shortterm.

But that may be changing. The growth of electricity produced by lots of smaller sources rather than brought in from a few large power plants, and the growth of free-fuel solar and wind, are already crippling the economics of atomic power and are starting to pose some problems for natural gas power.

Some biomass proponents argue that wood-based electricity, especially when its mostly local wood as it is in New England, is a relatively benign way to cover gaps in baseload power as we transition to renewables. Without biomass, they say, it will be harder to work our way out of dependence on fossil fuels because more money will flow by default to natural gas.

Consider how virtually all of Concord Steam’s customers hooked up to Liberty Utilities natural gas rather than any alternative after the aging biomass-fired heating plant in Concord went out of business. That case involves heat rather than electricity, but it’s still indicative of what is most likely to happen as biomass power ends.

So is burning wood for power and heat a good thing or a bad thing?

But I think what tips the balance is New Hampshire’ need to maintain some form of logging infrastructure, a minimum number of loggers and sawmills and wood processors and the companies to sell and service the equipment they need.

Without them, nothing can happen.

New Hampshire farming is illustrative. As our agriculture shrank in the last century we lost many feed stores and large-animal veterinarians and meat processors and contract harvesters, which has made it much more difficult for local agriculture to return. The same thing, I think, could happen to logging if biomass power dies, just as paper mills are doing.

There are benefits to having local loggers who can maintain our woodlands, so it behooves us from an environmental point of view to support biomass power, even in its current inefficient mode.

This isn’t a long-term solution. I think existing biomass-electricity plants are going to die before too long from economic pain. We need to quickly give financial support to combined-heat-and-power biomass systems, which may involve as little as a single building, to replace them, which will bolster our energy security and reduce how much money flows out of state for fuel.

But if there aren’t any loggers around to cut the wood, that won’t happen. So for now, reluctantly, I’d say that burning wood for power is good for our environment.

Check back next year. I may have changed my mind again.