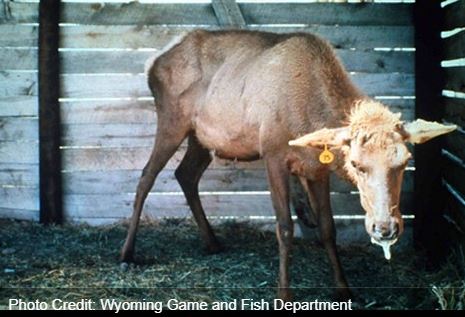 A deer with CWD. Courtesy- Wyoming Fish and Game.

From N.H. Fish & Game: A red deer from a captive facility in the Laurentides region of Quebec (north of Montreal) recently tested positive for chronic wasting disease (CWD). This is the Province’s first confirmed case of the disease. Therefore, Quebec is now legally classified as a CWD-positive jurisdiction and whole carcasses of cervids (members of the deer family including moose, deer, elk, and caribou, as well as any species of captive deer) harvested in Quebec can no longer be transported into New Hampshire.

This finding represents the closest confirmed case of CWD to the New Hampshire border to date and poses a much greater threat to the state’s deer and moose populations than past cases of the disease elsewhere in North America.

New Hampshire hunters who make trips to CWD-positive jurisdictions (listed below) are required to closely follow the mandatory regulations on bringing home any cervid carcasses including deer, moose, elk, or caribou. You may legally bring back ONLY deboned meat, antlers, upper canine teeth, hides or capes with no part of the head attached, and finished taxidermy mounts. Antlers attached to skull caps or canine teeth must have all soft tissue removed.

To date, CWD has been detected in wild or captive cervids in 25 states and 3 Canadian provinces. These include the states of Arkansas, Colorado, Iowa, Illinois, Kansas, Maryland, Michigan, Minnesota, Mississippi, Missouri, Montana, Nebraska, New Mexico, *New York, North Dakota, Ohio, Oklahoma, Pennsylvania, South Dakota, Texas, Utah, Virginia, West Virginia, Wisconsin, and Wyoming and the Canadian provinces of  Alberta, Saskatchewan, and Quebec. The most current list of CWD positive jurisdictions is on the Fish and Game Department’s website at www.huntnh.com/wildlife/cwd/facts.html.

A nationwide effort is underway to prevent further spread of the disease. This effort includes collecting annual samples of deer tissue as part of ongoing monitoring and surveillance efforts and restricting the transport and spread of potentially infected animals, carcasses, tissues, and bodily fluids. Movement of captive cervids continues to remain the number one threat in the spread of CWD; however, the transportation of high-risk deer parts (brain, spinal cord, lymph nodes) across state lines can also play an important role, as can the use of natural urine-based lures. Several states and Canadian provinces have already banned the use and possession of natural urine-based lures due to the potential for disease transmission. There are a number of synthetic deer lures on the market today that do not pose a risk of spreading disease that can be used as an alternative to natural urine.

During the fall deer hunting season, New Hampshire Fish and Game, with significant support from the U.S. Department of Agriculture, Wildlife Services located in Concord, collects heads and extracts samples from hunter-killed deer across the state for testing. As a result of these efforts, 6,260 deer have been tested in New Hampshire since testing began in 2002. No samples have tested positive for CWD to date.

For more information about CWD, its cause, preventing its spread and New Hampshire’s monitoring efforts, visit the New Hampshire Fish and Game Department website at www.huntnh.com/wildlife/cwd.