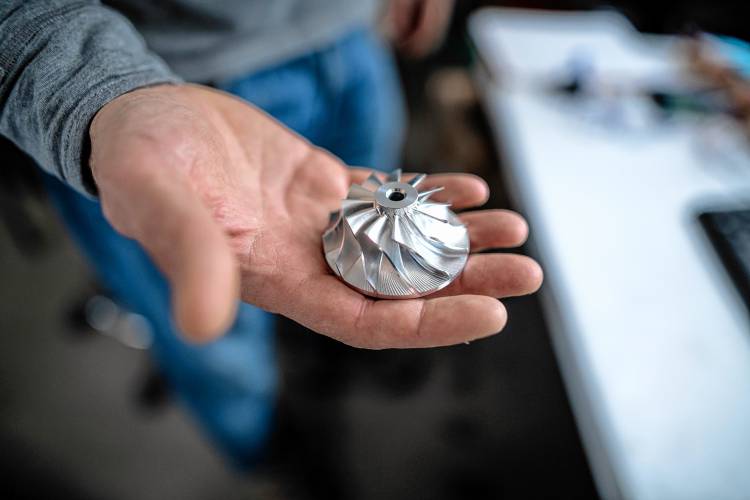 Steve Walker displays a turbocompressor, part of his latest research project in his Peterborough workshop. (Photo by Ben Conant)

Stop me if you’ve heard this before: A well-known New Hampshire entrepreneur wants to create an home-sized power plant that can provide electricity, heat and hot water using a type of engine that has been around for a century but never really commercialized.

Nope, you’re wrong. You haven’t heard it before, because I’m not talking about Dean Kamen’s efforts to create a home-sized Stirling engine, the subject of many past Monitor stories.

No, we’re talking about Steve Walker, founder of New England Wood Pellet and innovator in the biomass industry, who has founded a tiny company in Peterborough that just got $3 million in federal research money to develop a mini power plant that can fit in your home using a Brayton cycle engine.

Before we plunge into technical details, here’s the backstory.

In 2014, Walker, 51, sold out of Jaffrey-based New England Wood Pellet, the company he founded 23 years earlier and turned into a regional leader in biomass fuels. Walker says he was looking for a new challenge in the energy industry that would be useful and marketable and, importantly, feasible to create relatively soon.

“One of the things driving the decision was trying to avoid turning this into a science project,” he said. “When you’re trying to really, truly develop a totally new tech, it can take a very long time to work through all the problems. We don’t mind pushing technology, we just don’t want to create it from scratch – although we admire the people that do.”

This is an important point for us non-entrepreneurs to keep in mind. Society loves to celebrate brand-new inventions, but most technical progress comes from people who take existing systems and combine them in new ways, or use them in unexpected ways, or tweak them. Novelty is great, but improvement is often greater.

Walker and his team spent two years looking into energy fields like solar power, wind power and electric vehicles, but felt these were being tackled by bigger and richer firms. Eventually, their attention turned to buildings, which use about 40 percent of the nation’s total energy – not just electricity but also heat and cooling and water heating. Providing that energy locally and more efficiently has great potential to help the country tackle climate change, local pollution and even the disruptions that are facing the power grid.

But what technology can do that? Maybe the Stirling engine, but Walker decided not to try to out-innovate Kamen’s firm, DEKA R&D. Instead, he and his team decided on the closed-loop Brayton-cycle technology, partly because Hanover-based engineering firm Creare is experienced with it. Among other things, a Brayton-powered cooling unit built by Creare is on the Hubble space telescope.

“They have put many components of this engine in different situations, although it’s not exactly what we’re building. … With Stirling (engine) we couldn’t find as many examples as many that are ready to go,” Walker said. 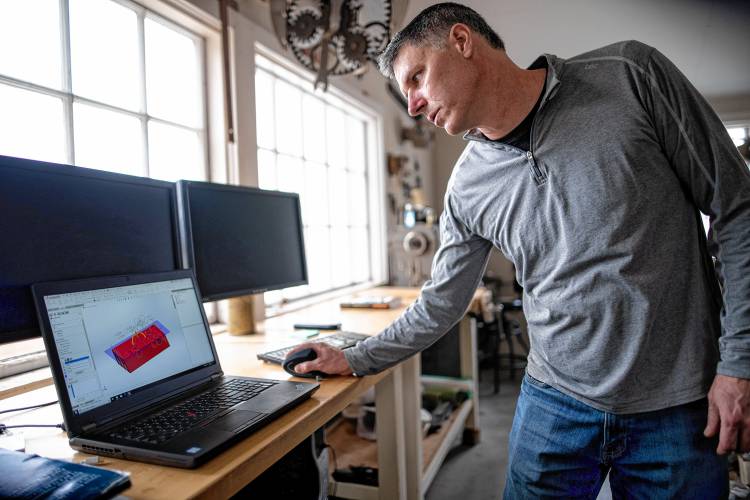 Both the Stirling and Brayton engines use heat generated outside the chamber to move the pistons, as compared to internal-combustion engines that burn fuel inside the piston chamber.

The huge advantage of external-combustion engines is that they can use almost any fuel – probably natural gas at the moment, but in theory anything from wood pellets to concentrated solar power. They also tend to make less noise and emit less pollution.

The disadvantages are smaller but more numerous, involving things like effective heat transfer, lubrication and power output. These problems have traditionally been easier to overcome in certain large-scale applications. Making them work in units small enough to get in a home basement will be tricky.

Walker has assembled a small team and formed a company called IMBY, which stands for “In My Back Yard.” Their goal is to put a Brayton engine combined with a heat pump in a single unit that creates both electricity and heat – known as “combined heat and power,” the most efficient way to generate energy for buildings – and to make it available for about $15,000 installed in a single-family home.

If such a unit could provide a home’s electricity, heat, air conditioning and even hot water, as well as act as a backup generator during power outages and possibly make a little money by selling power back into the grid, then there’s definitely a market. Walker says it’s certainly feasible, with cost control the hardest part.

“We have got to get into mass production – and we believe we have a very direct path to that,” said Walker.

It won’t be easy. Walker sees production still being four to five years away, which includes the time needed for every entrepreneur’s least favorite activity of gathering in two or three or more rounds of ever-larger funding to get operations up to scale.

“What no one has done yet (with power plants) has made the plunge to the small scale, and the only way to make it work is at a mass produced scale,” he said. “All of them are custom designed, custom built, custom engineered. You’d be hard-pressed to find two power plants that are the same.”

In the bigger picture, Walker sees the IMBY plant as part of the reworking that is sweeping the world’s energy grids due to technology like solar panels as well as the growing worry about climate change. They are transitioning – often painfully – from centralized networks into more distributed and more complex arrangements. A small, efficient combined-heat-and-power unit would go a long way to helping that transition.