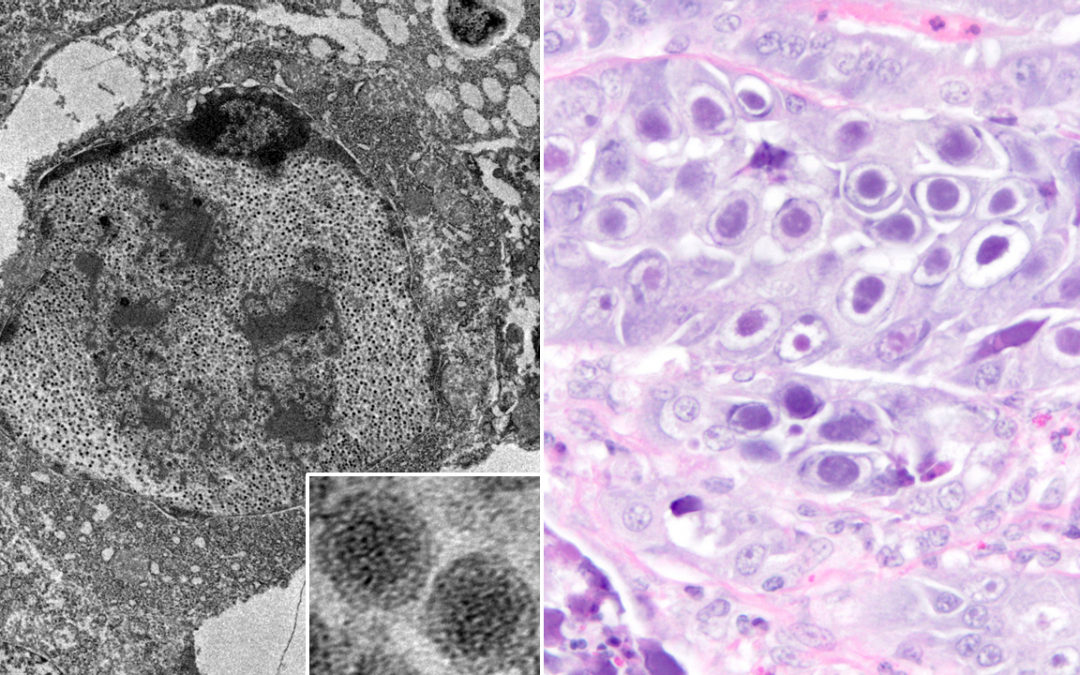 (I profiled this lab when it opened in 2015 in this article.)

From UNH News Service: Pathologists with the New Hampshire Veterinary Diagnostic Laboratory at the University of New Hampshire have identified the first reported virus in chimney swifts, an adenovirus called Chimney Swift Adenovirus 1, which may represent the first member of an entirely new group of adenoviruses.

Chimney Swift Adenovirus 1 (CsAdV-1) was diagnosed in five nestling chimney swifts submitted to the lab by the wildlife rehabilitation center Avian Haven of Freedom, Maine. Avian Haven acquired the chimney swifts from South Portland, Biddeford, and Lewiston, Maine. The chief clinical sign noted was regurgitation or decreased appetite. This adenovirus has never been described in the scientific literature. Sequencing of genetic material by collaborators Annabel Wise and Roger Maes at Michigan State University indicated that this virus is different from any other known adenoviruses.

“The finding of a viral infection in these birds was exciting, because although we know that virtually all forms of life are likely susceptible to viral infection, no virus has been previously described in this species by any diagnosticians or researchers, including in the five previous years of nestlings submitted to the NHVDL. Using genetic analysis, we found the virus quite distant from the most closely related adenoviruses. We believe this may represent the first identified member of a new genus of adenoviruses,” said David Needle, senior veterinary pathologist and assistant clinical professor with New Hampshire Veterinary Diagnostic Laboratory at the University of New Hampshire. Needle was assisted at the lab by Inga Sidor, senior veterinary pathologist and clinical associate professor.

According to the Cornell Lab of Orinthology, chimney swifts are smudge-gray and nimbly maneuver over rooftops, fields, and rivers to catch insects. Their tiny body, curving wings, and stiff, shallow wingbeats give them a flight style as distinctive as their fluid, chattering call. This enigmatic little bird spends almost its entire life airborne. When it lands, it can’t perch—it clings to vertical walls inside chimneys or in hollow trees or caves.

Chimney Swift Adenovirus 1 cannot be passed from animals to humans, although humans can contract human versions of adenoviruses from other people. Adenoviruses are ubiquitous, having been diagnosed in all classes of vertebrates, including mammals, reptiles, and birds. While most adenoviruses are not pathogenic, adenoviruses in people can cause fevers, upper respiratory tract symptoms, and conjunctivitis; these infections usually are mild.

Previously Needle identified the first case of Skunk Adenovirus-1 in the United States. The rare respiratory disease was found in tissues of a hedgehog submitted for diagnosis by a veterinarian at Plymouth (NH) Animal Hospital to the NH Veterinary Diagnostic Lab. It represents only the third confirmed detection of this virus in the world.

Identification of these animal adenoviruses highlights the importance of performing a thorough diagnostic workup when a perceived illness affects a group of animals. This applies to domesticated companion animals, exotic animals, agricultural animals, and wild animals.

“Historically disease emergence and re-emergence are ongoing trends, and it is very likely this will continue. Using standard diagnostic pathology and some advanced investigative techniques, we and our collaborators can identify the causes of disease incidents to provide information for treatment and prevention,” Needle said.

“Accurately and rapidly identifying infectious agents is critical in safeguarding animal health, public health and New Hampshire agriculture. Most infectious diseases in people, including the top bioterrorism agents, are considered zoonotic, which means they can be transferred from animals to humans,” said Robert Gibson, managing director of the New Hampshire Veterinary Diagnostic Laboratory.

This research is supported by the New Hampshire Agricultural Experiment Station and the State of New Hampshire. The following scientists collaborated with UNH pathologists on this case: Dalen Agnew, Annabel Wise and Roger Maes, Veterinary Diagnostic Laboratory Michigan State University; Christopher Gregory and Branson Ritchie, College of Veterinary Medicine, University of Georgia. The research would not have been possible without submission of case materials by Avian Haven.