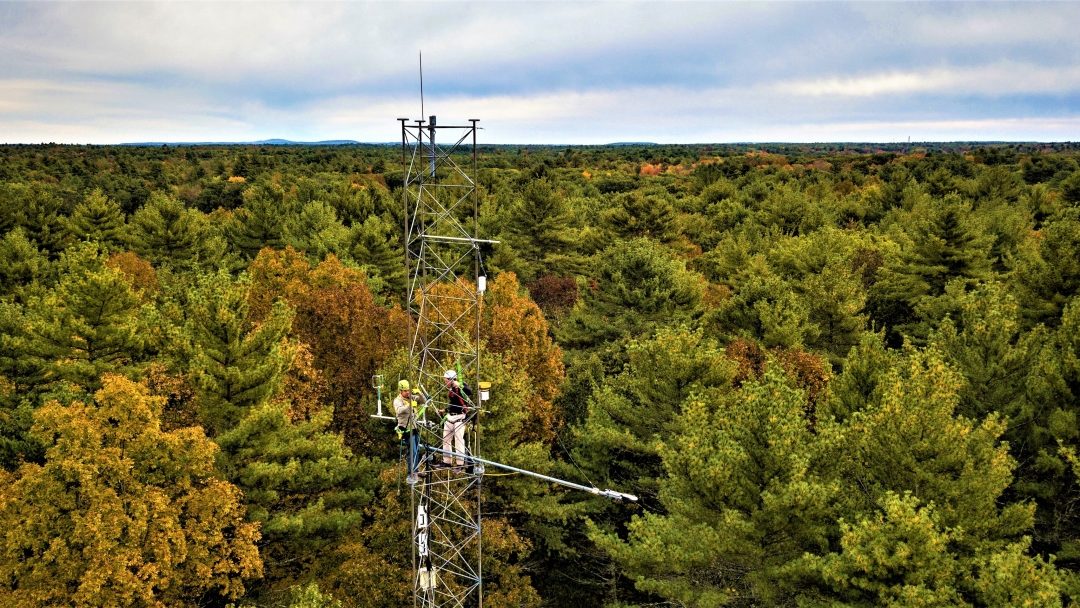 H Agricultural Experiment Station researcher Scott Ollinger and research scientist Andrew Ouimette work on a tower at Thompson Farm. Ollinger is part of a team that will investigate how forests and other vegetation control nitrogen and sequester carbon in watersheds and how this dynamic varies in different types of landscapes as well as under climate variability. Scott Ripley/UNH

Researchers with the NH Agricultural Experiment Station at the University of New Hampshire have received a National Science Foundation Award to better understand how forests and other vegetation control nitrogen and sequester carbon in watersheds and how this dynamic varies in different types of landscapes as well as under climate variability. Nitrogen is a nutrient that is both critical for life but, in excess, causes coastal algal blooms. Carbon storage helps offset greenhouse gases.

“New Hampshire and New England are mostly forested. Besides their value for recreation and wildlife, forests also take up and store carbon and nitrogen. They prevent nitrogen from reaching coastal estuaries like Great Bay, N.H., which, like many other estuaries across the country, is already receiving too much nitrogen. Watersheds also store carbon, which slows, to some extent, the increase of carbon dioxide in the atmosphere. We are trying to understand how effective watersheds are at storing carbon and nitrogen in a variety of different parts of the country–tropical, southern temperate, northern temperate, prairie, mountain, coastal, boreal, and tundra,” said experiment station researcher Wilfred Wollheim, principal investigator on the new project and associate professor natural resources and the environment.

Wollheim, who also oversees the UNH Water Systems Analysis Group at the UNH Institute for the Study of Earth, Oceans, and Space, will collaborate with fellow experiment station researcher Scott Ollinger, professor of natural resources and the environment and director of the UNH Earth Systems Research Center, and Mark Green, senior research associate at Case Western Reserve University.

The researchers will take advantage of data collected by the National Ecological Observatory Network (NEON), which is a National Science Foundation-funded project with research sites in diverse environments nationwide. Specifically, UNH researchers will use data on stream chemistry and the exchange of carbon between the land and atmosphere in 22 watersheds, including the Bartlett Forest in New Hampshire and Harvard Forest in Massachusetts. They will use the data to model forest carbon and nitrogen storage to investigate what limits storage of these elements in ecosystems across the United States.

“This research is important as people add more nitrogen to the land through air pollution, fertilizers, and septic systems. It also will help understand how much carbon the environment can absorb as carbon dioxide increases in the atmosphere,” Wollheim said.

UNH researchers plan to share their data and research results with policy makers and other researchers. The project team also will work with schools and local communities to explain how what happens on land affects water quality. Finally, students will learn how to use data from environmental sensor technology.

This research is funded by NSF Macrosystems Biology Award for $219,588. This material also is based upon work supported by the NH Agricultural Experiment Station, through joint funding of the National Institute of Food and Agriculture, U.S. Department of Agriculture, under award numbers 1016265 and 1013433, and the state of New Hampshire.