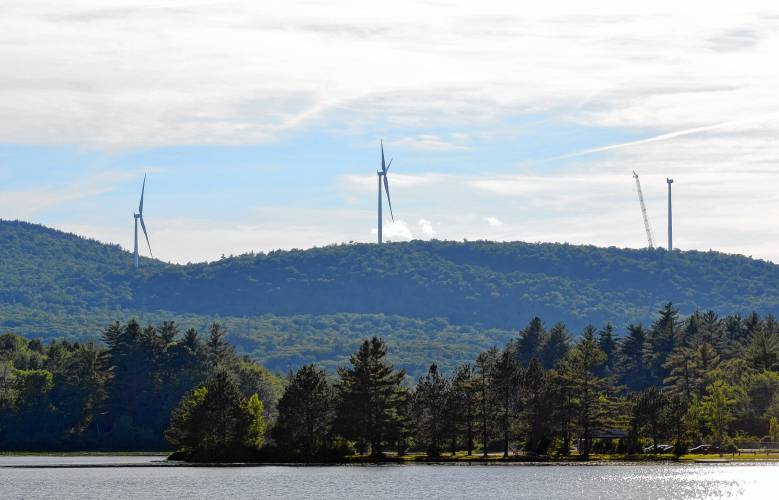 View from the Antrim Town Beach shows turbines for the Antrim Wind project going up in July, 2019. Photo: Monadnock Ledger

Like pretty much anything being built these days, the wind farm was opposed by neighbors and groups who thought it was ugly, or would damage some pristine areas, or otherwise didn’t belong there. The court battle went to the state Supreme Court, delaying the $63 million project by several years.

All these anti-infrastructure arguments tend to be correct to at least some extent, but they reek of letting the perfect be the enemy of the good. Every minute that we block wind or solar projects is an extra minute of coal and gas and oil being burned for electricity.

Installed capacity of 214 MW puts us in the bottom half of the country in state-by-state wind power. Maine, with 923 MW installed, is by far the region’s wind leader, partly because it’s bigger and partly because it has relatively good wind resources.

I don’t know of any other wind projects in the works in New Hampshire, but I could be wrong.

As I’ve mentioned before, New Hampshire was home to the world’s first true wind farm, albeit a test facility. The 30-KW assembly on Crotched Mountain showed that you could link together multiple wind turbines and feed power to the grid.