Have another lager – the cows are hungry 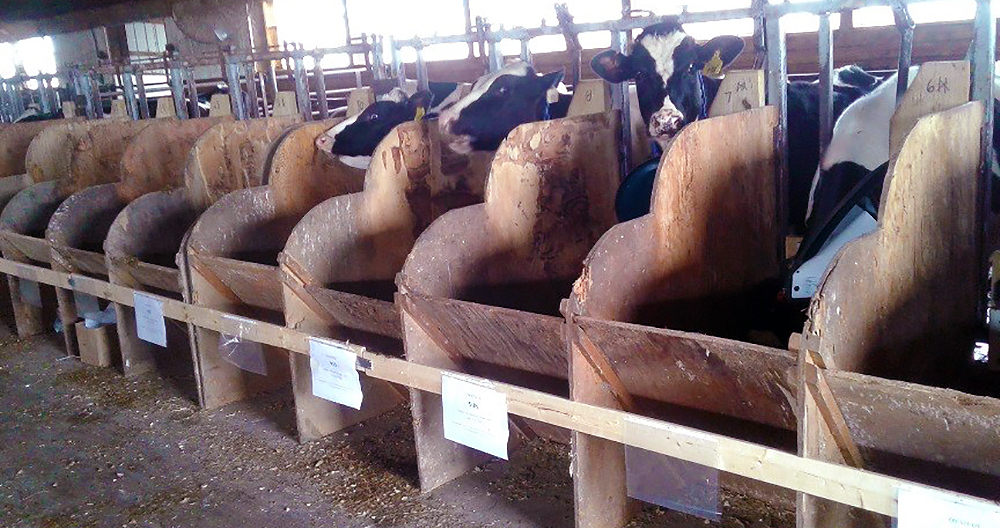 (This report is from UNH News Service. I’m a little surprised because I thought spent brewing grains were already used as farm feed – my neighbors the chicken farmers get a couple hundred pounds of them each week.)

Wet brewers grains, the abundant residues of the brewery industry, show promise as a potential cost-effective, high-nutrient feed replacement for dairy heifers, according to new research from the New Hampshire Agricultural Experiment Station at the University of New Hampshire.

The study is being led by experiment station researcher Peter Erickson, professor of agriculture, nutrition and food systems, and extension dairy specialist, and Eric Hatungimana, doctoral student in dairy science. It is taking place at the experiment station’s UNH Fairchild Dairy Teaching and Research Center.

“The cost of energy and protein feeds, especially corn and soybean, has been rising, and dairy farmers are looking for alternative feed sources. One strategy is to use less expensive feeds such as wet brewers grains, which appear to be feasible due to their nutritional value, availability, and low cost. Our project evaluated the effect of replacing corn and soybean meal with wet brewers grains on growth performance of dairy heifers,” Hatungimana said.

The brewery industry uses mostly malted barley to produce beer, leaving behind a protein-rich residue known as “beer waste” that is suitable for dairy cattle feeding. While farmers have been feeding wet brewers grains to cows for years, there is limited data on feeding it to heifers–young female cows that have not borne a calf. Erickson and Hatungimana found that including these wet brewers grains in the diet of dairy heifers at a rate of 20 percent can completely replace soybean or corn-based feed and provide similar growth performance compared to diets using those concentrates. Moreover, replacing corn and soybean meal with wet brewers grains considerably reduces the feeding cost for raising dairy heifers.

“These findings are so important for dairy producers who are currently facing the low milk prices. Since the cost of feeds accounts for 70 to 80 percent of the total production in any dairy farm, using nutritious and cheaper by-products such as wet brewers grains will help dairy farmers to increase returns while improving animal performance. Moreover, using wet brewers grains in feeding dairy heifers is an economically and environmental sound way for food processors to reduce waste discharges and cut wastes management cost and provide additional revenue to processors,” Hatungimana said.

Raising heifers is expensive as heifers do not provide farm income until they calve at 22 to 24 months and start producing milk. Incorporating wet brewers grains into the diet of dairy heifers would reduce the cost of production while achieving a desired growth until first calving, according to the researchers. There are approximately 800 breweries around the Northeast; these produce an ample supply of wet brewers grains.

“Brewers grains are the most abundant brewing by-product and are rich in protein. While conventional concentrate feeds such as corn and soybean meal are expensive, using wet brewers grains would be an ideal strategy to reduce the feeding cost of raising heifers and hence achieve the desired growth performance,” Erickson said.

The researchers also evaluated the effect on storage of wet brewers grains with a commercial preservative or salt on yeast and mold growth. “Due to their high moisture content, from 65 to 75 percent, improper grain storage often leads to large loss of dry matter and nutrients because of mold and yeast growth. These produce different kinds of mycotoxins that are even harmful to cattle,” Hatungimana said.

They found that treating wet brewers grains with salt not only improved dry matter, fiber, and protein digestibility, but also reduced spoilage by mold and yeast. Salt is less expensive than the commercial preservatives and is easily accessible to farmers who feed their herd with wet brewers grains.

This research is presented in the journal Applied Animal Science (DOI: https://doi.org/10.15232/aas.2019-01857). This material is based upon work supported by the NH Agricultural Experiment Station, through joint funding of the National Institute of Food and Agriculture, U.S. Department of Agriculture, under award number 1016574, and the state of New Hampshire. This research also is supported by Agri-King Company, Fulton, Ill., which provided the commercial preservative. Rock River Laboratory helped in the analysis of wet brewers grains nutrients, and Bad Lab Beer Co., Stuart Farm, and Scruton Farm provided fresh wet brewers grains for the study.