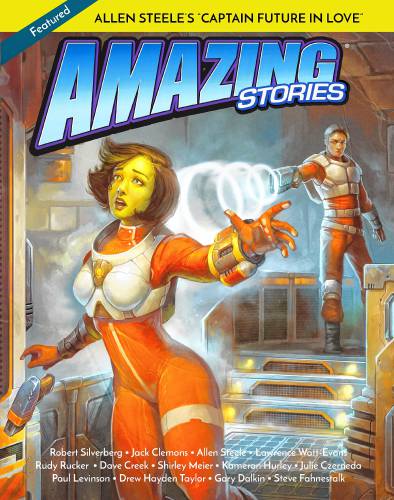 The publisher of a New Hampshire science-fiction magazine is rooting for the success of a show on Apple’s new streaming-video service, and for admittedly selfish reasons.

“We’re primarily hoping for a renewal so we can continue to collect fees and support the magazine,” said Steve Davidson.

Davidson owns the rights to the name “Amazing Stories,” famous in science fiction circles because it was the name of a magazine created in 1926 by Hugo Gernsback that helped launch the entire genre. Davidson, a longtime science-fiction fan, bought the name in 2008 and has used it to create an online magazine and, since 2018, a quarterly print magazine with stories, artwork and reviews.

From a monetary point of view, however, what’s most important is that he has licensed the name to director Steven Spielberg, who created an Amazing Stories TV series in the 1980s and is about to launch an updated version on Apple TV Plus, that company’s new streaming-video platform.

The new version, like the old one, is an anthology series, with each episode a stand-alone story lacking connection to previous episodes.

Amazing Stories will start on Apple TV Plus on March 6, with five episodes scheduled. Trailers have been released, hinting at stories about space aliens, unexpected abilities – “You’re a superhero, grandpa!” shouts an excited boy in one quick cut – and perhaps time travel.

Davidson said he hopes this new series is more science-fiction oriented than the 1980s version, which was heavier on fantasy and mystery.

“We’ll see how everything comes together – we have no control or influence over it,” he said.

“It looks as if it’s going to edge a little bit more toward science fiction than the original. We’re ramping up the fans, encouraging everybody to watch, hoping that it’s going to be a good series.”

Davidson said the Amazing Stories magazine is facing the same headwinds as other print publications but is moving along.

Among other things, he is launching a line of novellas called Amazing Select, including an update of a 1940s pulp-magazine character named Captain Future.

Davidson noted a minor chronological connection between the new series and the original Amazing Stories.

“The original magazine has a cover date of April 1926, but that was the date it had to be sold by. It was actually distributed in March, so having a March (TV launch) is appropriate,” he said.