If you want to really understand ice storms, you have to create your own 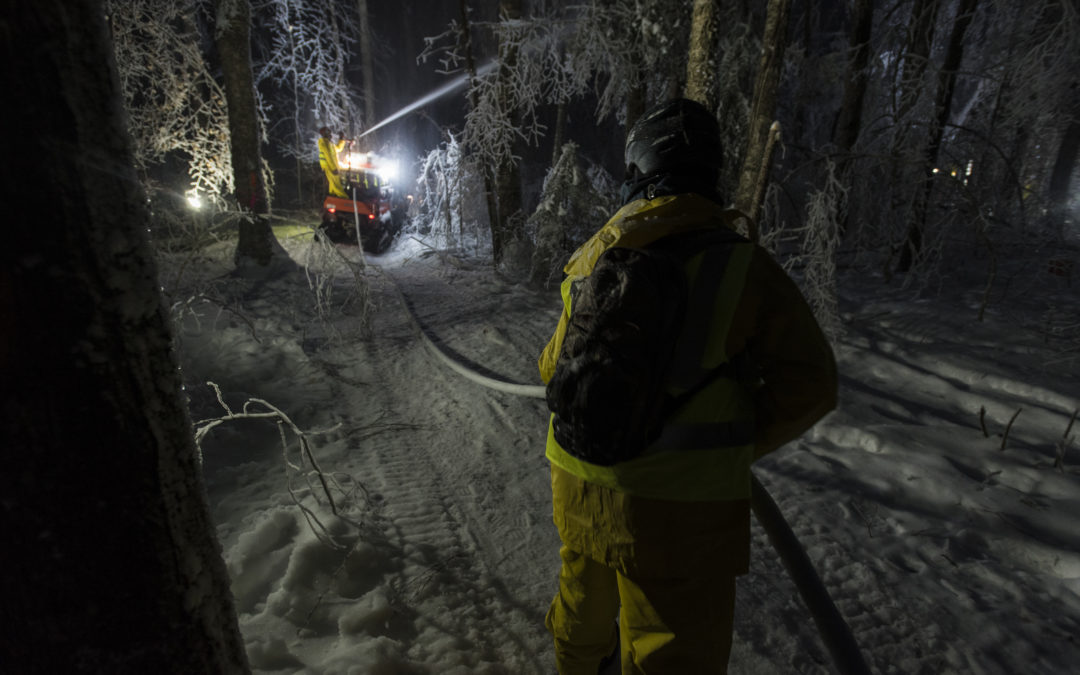 Water being pumped into trees during a freezing night as part of the Ice Storm Experiment at Hubbard Brook Experimental Forest. Joe Klementovich—Hubbard Brook Research Found

If you live in New Hampshire, then at least once in your life (and probably far more often) you have been flummoxed by an ice storm.

Supercooled rain that turns to ice on contact with roads and branches has lengthened your commute, mangled your fruit trees or kept you in the dark for a day or two, or maybe a week or two if you were here during that mind-blowing storm of January 1998. These ice storms are part of life and I figured we understood it.

So I was surprised Friday to hear Lindsey Rustad, a researcher who helped lead the world’s first serious scientific experiment about ice storms, admit this: “One of the things we learned very quickly was that we don’t know much about them.”

Rustad was a team leader for the Ice Storm Experiment at Hubbard Brook Experimental Forest, which is designed to reduce that ignorance. She and other researchers presented their findings at the McAuliffe-Shepard Discovery Center last Friday in front of a room packed with people whose jobs ranged from forester to meteorologist to emergency manager to timberland owner.

The experiment, which I wrote about last year, was straightforward in theory but complex in practice. Scores of scientists and volunteers gathered in the 8,000-acre research area north of Plymouth in winter 2015 and again in winter 2016, spending several cold nights spraying thousands of gallons of water onto trees in separate plots as well as specially designed brackets, followed by days and weeks of careful measurement and months of data analysis to quantify the effects.

Among the things they wanted to know was the point at which serious damage begins. They sprayed a quarter-inch of ice on some plots, a half-inch on others, three-quarters of an inch on others, and on some sprayed a half-inch one year followed by another half-inch the next year. (These are radius measurements, not diameter, so the effect on branches is actually twice as bad as it sounds.)

Long-term study at Hubbard Brook says almost three tons of fine and coarse woody debris fall onto the average acre over the course of a year. But when they sprayed a half-inch of ice, it rapidly knocked down almost two tons of material, meaning eight months of stuff was felled by a single event.

Things were much worse when they sprayed three-quarters of an inch of ice. An incredible 7 ½ tons of material fell, most of it branches and limbs – more than two years of tree debris collapsing overnight. No wonder big ice storms take down so many power lines.

As a result, the project has cautiously recommended that the National Weather Service lower the point at which it issues ice storm warnings in New England, from the current level of half an inch of accumulation down to one-quarter of an inch, which is the level used in the mid-Atlantic states.

“Half-inch radial ice accretion may be too high because significant forest effects, including branch-fall, will have already occurred or be underway,” the report notes.

Among the interested parties in Friday’s presentation by Rustad and her team were representatives from all three of the electric utilities in New Hampshire.

Brian Salas, a regional arborist in the Tilton office of Eversource, said the companies make staffing decisions and storm preparations based in part on official warnings. “When the state issues a warning, we do want to be prepared for it,” he said.

From the science-fan point of view, maybe the most interesting part of the Ice Storm Experiment is that one of its main goals was to standardize measurement. We layfolk underestimate the importance of measurement in science; next to the principal investigator, the most important person in any research effort is the person who calibrates and maintains all the tools.

There is, Rustad and others emphasized, no easy way to measure ice accumulation on branches, wires and non-flat surfaces, especially if it forms icicles.  As part of the experiment, researchers developed a six-arm “star” made of wooden dowels that can be put on the ground or hung in the air, with the upright arms at the angle least likely to form icicles.

As a volunteer precipitation weather observer for the national citizen-science group CoCoRaHS, I look forward to obtaining one of these stars and collecting ice data from my yard.

Speaking of collecting data, the Ice Storm Experiment is still ongoing. Researchers will keep observing and measuring the effect of ice damage on the forest canopy, new plant growth, soil and stream health and wildlife populations in each of the plots for years, providing data that should be useful in a host of areas.

That sort of long-term, large-scale research is why Hubbard Brook Forest, which was established 55 years ago, is famous among scientists. After all, acid rain was discovered here – you can’t get much more impressive than that.