You can order everything else online, so why not a box of bumblebees? 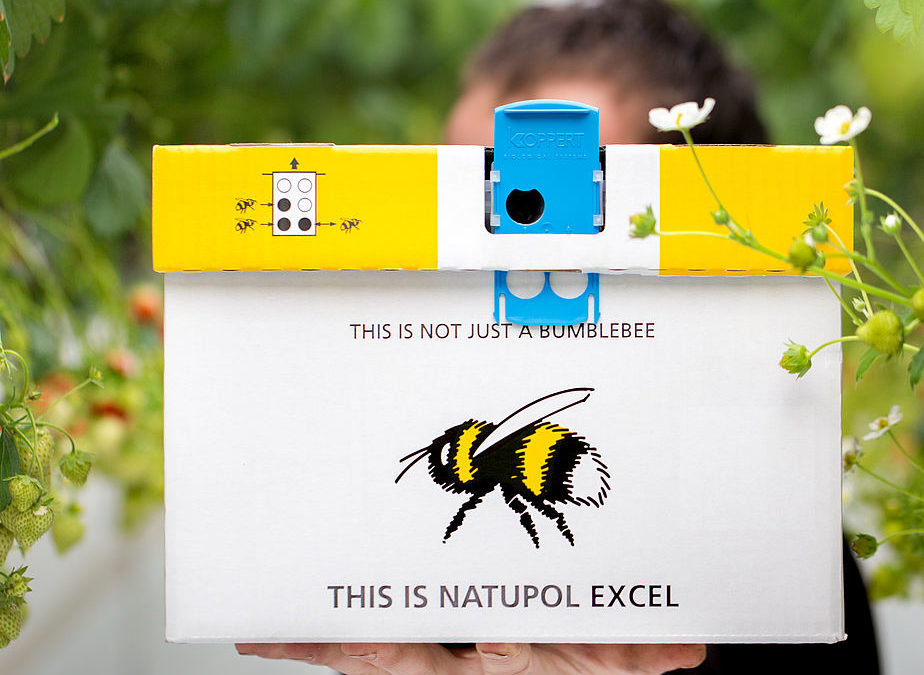 A box of bumblebees can help with indoor pollination. Courtesy of Koppert Biological Systems

Many people have a favorite type of insect. Butterflies and dragonflies are perennial favorites, but you can find folks with a soft spot in their heart for almost anything, from walking sticks to dung beetles.

There’s something about their non-threatening roundness and color scheme, plus the way they wander semi-vaguely through the air, that seems friendly and useful, like the neighborhood handyman. I imagine them muttering to themselves, “Doggone it, where did I leave that pollen? I know it was on a flower around here somewhere.”

So I was delighted to learn from George Hamilton, New Hampshire Cooperative Extension agent extraordinaire, that you can buy a box of bumblebees and have it delivered to your home. He was a little surprised I didn’t know about it.

“They’ve been around for a while. A lot of growers in greenhouses have used them (for pollination),” he said.

One of those growers is at McKenzie Farms in Milton.

“We’ve been using them probably close to 15 years for pollination,” said Brett McKenzie, the owner. “Our main use is in greenhouse tomato production. They help us get nice big fruit, they’ll move the pollen as opposed to wind or shaking them.”

Honeybees get all the attention as agriculture pollination machines. But maybe that affection is misplaced.

After all, honeybees are an imported species in North America, brought here by European colonists, yet we’ve got plenty of native bumblebee species that can pollinate just fine. Maybe we should be thinking more about bumblebees, especially since they live up to my blue-collar image of their work ethic.

“Honeybees indoors – they get confused. Bumbles just keep working away. They also will work when its colder and windier compared to honeybees,” said Hamilton.

There are a few companies that will sell you a box of bumblebees, usually Bombus impatiens, the common eastern bumblebee.

They are literally boxes that you keep as the bees’ home, which have enough bees to cover between 1,000 and 10,000 square feet of plant area. Some have a little door you can close at night when the bees settle down, so you can easily shift them to a new location.

Admittedly, you also have to buy and maintain a hive for the honeybees but there’s a big payoff: They have a queen and make new bees. The bumblebee box doesn’t, so it lasts only one season before all the bees die or fly away to establish solitary nests elsewhere.

As a result, bumblebees are used largely for indoor pollination, in high tunnels over rows of crops or greenhouses where honeybees won’t go. That means our food supply is never going to pivot from honey to bumble in the bee department unless honeybees are eradicated, which sometimes doesn’t seem out of the question.

Honeybees have gotten harder and harder to keep because of growing problems with mites and diseases – my wife and I lost three hives over winters and gave up – and now the West Coast appearance of “murder hornets” that like to chop bees’ heads off. We might eventually have to depend on bumblebees.

As a non-farmer, my first thought when I learned about what I can’t help but think of as “box o’ bumbles” is that they could help slow the decline in wild pollinators. I certainly don’t see as many wild bees as I did at my home a decade or two ago, and I’m not alone.

Talking to McKenzie made me less optimistic about this idea, however.

“I think we have a small colony of wild bumbles around that have escaped,” he said, but it’s not like he has repopulated the local bee world. “Wild pollination, we don’t count on it. In this business there’s already enough risk.”

Still, he added, he’s happy to have the escapees around. “Anything that’s out there pollinating is helping us.”

So I guess I’ll have to stick to planting a pollinator garden and making those tubes you put out as solitary bee homes to help my bumbling buddies.

But maybe I can try some other species. Does anybody know where I can order a box of dung beetles?