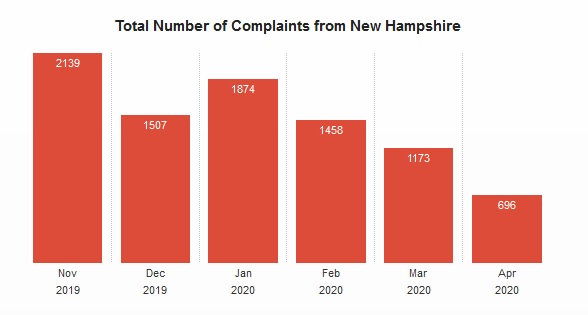 A site called reportedcalls keeps track of complaints to federal agencies about telemarketing calls and it shows something unexpected: Complaints were way, way down in April, both in New Hampshire (as shown above) and nationally.

Folks in New Hampshire is not shy about complaining to the the National Do Not Call Registry – we were No. 1 in the country on a per capita basis, as I’ve reported. Yet the number of complaints in April was down 41% from March, which was down 25% from February.

The site doesn’t give any explanation for this. It could be that the budget-slashing administration isn’t recording complaints accurately or that people have gotten tired of complaining. But maybe the economic shutdown from the coronavirus has had an unexpected benefit of reducing effort on telemarketing calls.

Wouldn’t that be nice?

Actually, I just thought of another possibility: People are so bored from stay-at-home rules that they don’t mind telemarketing calls any more.