Above treeline in the Whites, life isn’t easy 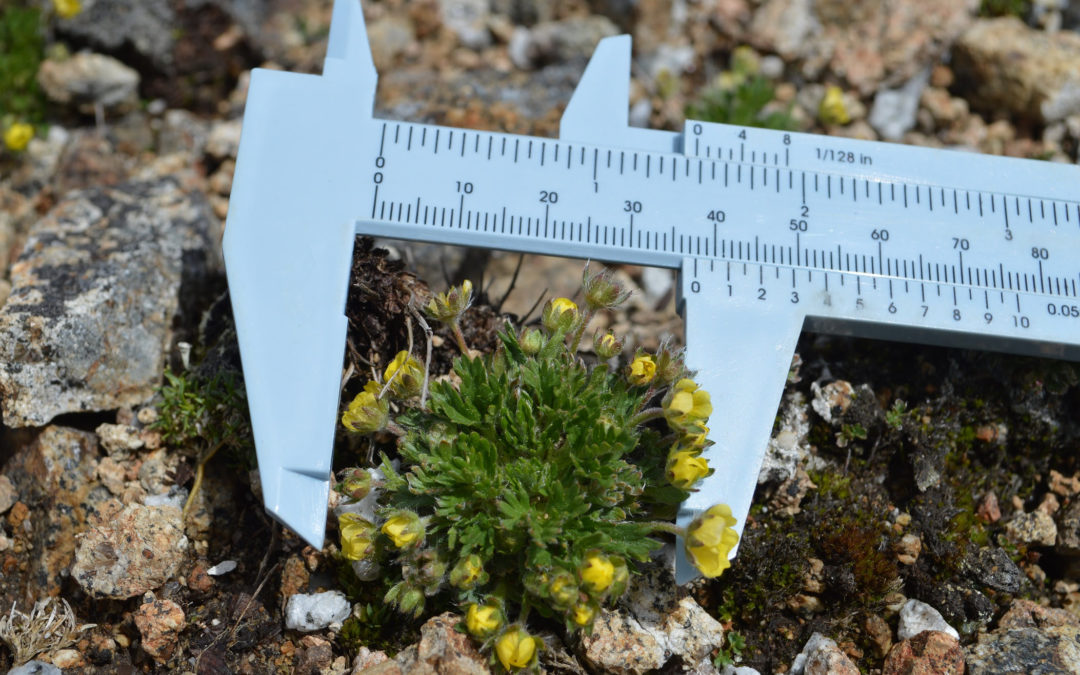 The dwarf cinquefoil flower is, at most, a half-inch across. (Photo: Plymouth State University)—Courtesy

I haven’t been warm-weather hiking in the White Mountains this year because first they were closed and then they were overwhelmed by (ooh, yuck) Massachusetts people, but I’ve been above treeline enough to know that it’s a whole different world.

That’s the appeal, of course.

A few hours of uphill effort gets you to a distant ecosystem, as if a wormhole connected Hart’s Location to central Labrador. This rapid change is very unusual and explains why so many Westerners who laugh at our dinky little mountains have to be rescued when the weather turns on them.

For a scientist, that novelty is alluring. Since there are only about 600 acres of alpine zone habitat in the White Mountains and they’re been isolated for 10,000 years since the glaciers retreated, my hiking destination is a biologist’s natural laboratory.

One person exploring that laboratory is Hannah Vollmer, a Thornton native in the master’s program at Plymouth State University who was awarded a National Science Foundation Graduate Research Fellowship, becoming the first PSU student to get one. As part of Dr. Diana Jolles’s plant evolutionary lab, she’s using new genetic tool to analyze a tiny plant that exists only in the White Mountains, with the goal of figuring out how best to keep it there.

The plant is dwarf mountain cinquefoil, also called Robbins’ cinquefoil. It’s tiny, with flowers maybe a half-inch across, and well adapted to the extreme winds and cold, although not so well adapted to being stepped on by hikers or out-competed by dandelions and other species we have accidentally brought there.

“It has been well researched but there are new techniques you can use today – genetic techniques – that are getting better and better all the time. Even since I went to college originally things have just been blown out of the water,” she said.

“You can now look at whole genome, see evolutionarily where it came from. That can tell us about the biology – instead of trying to see which pollinators come to it and doing a lot of experiments, trying to see if flowers mature in certain ways, you can look at the genetics,” she said. “That can help answer, do they need to be preserved differently?”

There are only two populations of this tiny plant, covering a couple of acres total. One is on the Presidential Range but Vollmer won’t even give that much information about the other one, to protect it from the curious.

“I don’t want to discuss that because it’s so small. There are probably only dozens of plants there,” she said.

My biology textbook said a population this tiny and isolated will soon inbreed and die from lack of genetic diversity, but that doesn’t seem to be the case with dwarf cinquefoil. Why not? And what does that say about how we should try to preserve it?

Part of Vollmer’s work is to see how the plant has changed, if at all, over two centuries by studying the genetics of dried samples in herbariums, libraries of dried plants kept at other research institutions.

“There are lots of collections from mid-1800s, a time of trophy collecting when botanizing the White Mountains. The only way they could share information was collecting these plants and sending them to other botanists,” she said. “You can use those old, old plant materials for genetic analysis. You can use tiny little bits of plant material that’s been dried and manipulated in different ways and still get enough genetic material out. That was pretty much impossible just several years ago.”

COVID-19 derailed those plans; no herbarium road trips for now. Fortunately many have put information about their collections online, so Vollmer can go online shopping.

“I can request which ones I can get on loan” for genetic sampling. “A couple places have offered to do the sampling for me, which is great.”

Historical analysis could show whether the gene pool is shrinking, reflecting whether we need to be concerned about it. This is complicated because dwarf cinqfoil reproduces by apomixis, a plant-specific type of asexual reproduction. Weirdly, it sometimes produces seeds without fertilization; they are clones of the parent.

“It’s interesting to think about where this plant came from. Some parts of the chromosome point to it possibly being a hybrid of other cinqfoils. It could have been hybridizing in different populations or it could have hybridized only once.”

Vollmer is 36, an example of the increasingly common case in which an adult returns to school for advanced degrees. Her botanical and ecological interest was piqued by growing up near Hubbard Brook Experimental Forest, which is best known in scientific circles as the place where acid rain was discovered, and her career before returning to northern New Hampshire was varied enough that for a while she lived in a school bus. (She still owns it, but not as habitation.)

As well as the dwarf cinqfoil, Vollmer is researching a plant called sibbaldia that gradually died out of the White Mountains – the last sighting was in 2009, although extirpation (the term for local extinction) isn’t yet official because there might be seeds lurking in the soil.

The question is whether it is genetically related to the sibbaldia plant found in Arctic climates in Norway, Siberia and Alaska. Knowing that could help the White Mountain National Forest decide how to proceed if it wants to reintroduce sibbaldia.