I like lobster dinner, so I care about lobster sperm counts 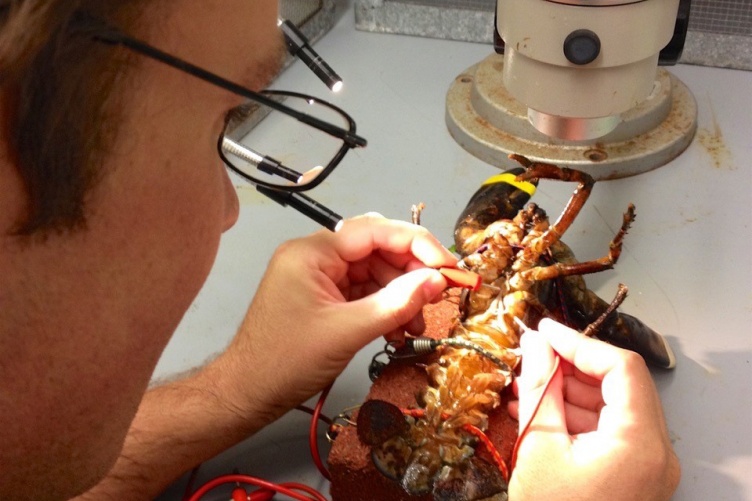 By Sara Schaier, UNH: If you want to understand how a species will survive or fail, one of the things you need to know is whether it’s mating at top capacity. A new study from UNH discovered a better way to count sperm in lobster that could help researchers of any animal species understand this key aspect of species survival.

UNH scientists, looking to better understand how climate change may alter lobster reproduction, are measuring the amount of DNA contained within the lobster’s spermatophore — the package of sperm a male lobster transfers to females during mating. The new technique, which is described in an article recently published in the Journal of Crustacean Biology, is a valuable alternative to existing costly and time-consuming methods.

Ben Gutzler, who graduated from UNH in December with a Ph.D. in marine biology, led the research as part of his doctoral work in collaboration with Win Watson, UNH professor emeritus of marine biology and Tracy Pugh ’14G from the Massachusetts Division of Marine Fisheries. Their main goal was to determine whether male lobsters experience declining numbers of sperm when they mate successively, leading to sperm limitation within the population.

Previously, says Watson, the absence of a cost-effective or efficient way to measure lobster sperm meant that testing the sperm limitation hypothesis was rarely attempted, despite concerns about the sustainability of the American lobster population.

“Imagine if it took a week to produce a complete lobster spermatophore. That would mean that male lobsters might only be able to mate once a week,” explains Watson. “That, in turn, might mean that some female lobsters that might be ready to mate, but don’t get the chance. Females only mate after they molt, which they do only once per year, and they all tend to do it around the same time. So, limited availability of male sperm could significantly impact the population.”

Although the researchers did not find evidence of sperm limitation among male lobsters, they did uncover inconsistent sperm production among the individual lobsters studied that could have implications for population sustainability and prompt further study.

“Previously, if we wanted to look at questions of reproductive output in lobsters, it took incredibly time-and labor-intensive methods,” says Gutzler. “This will hopefully make it possible for a broader group of scientists to ask more relevant questions about more animals.”