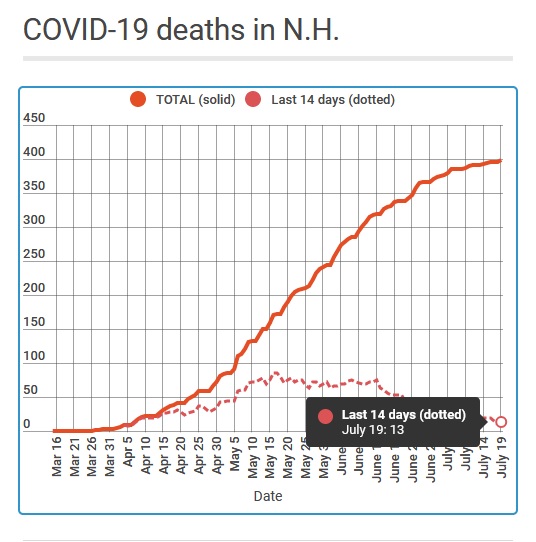 This is the Monitor’s latest weekly look at measurements of four goals designed to give a sense of how well New Hampshire is doing at controlling the COVID-19 pandemic. The numbers continue looking good.

Before we get to the details, however, let’s consider an important aspect of testing that our measurements don’t cover: Time.

Three readers wrote after last week’s update to say they were discouraged about getting tested because it so long to receive the result, and said this might be part of the reason that the state’s testing numbers aren’t increasing.

One of them is a family physician who gets herself regularly tested at Concord’s drive-through site on Stickney Avenue to make sure she hasn’t become an asymptomatic carrier who could infect her patients.

“In May and early June it took 2 days” to learn the result, said Dr. Hilary Alvarez of Concord Family Medicine. “The last two times I went, mid- and end of June, it took 5 days.”

“If it takes a week to come back I’ve already seen a week’s worth of patients … that’s not useful,” she said.

Delays in obtaining test results can be serious. Aside from discouraging people from getting tested, they make it difficult to do contact tracing, determining who might have been infected by a sick person. They can even upset institutional plans.

Dickinson College in Pennsylvania, for example, cited increasing delays in getting test results when it changed its mind about bringing students, staff and faculty back to campus this fall. “We would be faced with having many in our community isolated for a week or more, even before we know if they are positive,” the college said in a statement that explained why it was switching to online classes.

“Both Quest and LabCorp, which conduct the vast majority of tests collected by states, have announced that their turnaround time is a week or so due to the demands from other states where cases are on the rise,” wrote Jake Leon, spokesman for the Department of Health and Human Services, in response to a Monitor query.  “New Hampshire is not immune to what happens in other states and this is one area where the state feels the effects of cases increasing in most states in the U.S.”

“We’re fortunate that the N.H. Public Health Lab is able to provide results 3 days after receiving a sample. The (lab) is currently focused on testing specimens collected from our most vulnerable populations, such as (long-term care) residents and staff,” Leon wrote.

Test results for serious patients, such as those in emergency rooms or ICUs, are obtained much more quickly.

Despite the delays, Dr. Alvarez said she would continue to get regular tests even if it’s less effective than it should be because she wants all the information she can get. She did add that the actual process of a technician obtaining a tissue sample via a nasal swab is far from pleasant.

“On the plus side, the state scheduling system works well, and they now let you book 24 hours in advance instead of 48. I get a very pleasant phone call from the National Guard to make my appointment, and then on site they have a pretty efficient system set up,” she added.

Here’s our weekly update on how we’re doing with the four key metrics:

Have we met this goal? Yes, sort of.

However, about one-third of those probably involve repeat tests of people such as Dr. Alvarez or staff at long-term care facilities. It’s not clear because the DHHS last week stopped giving daily updates on the number of different people who are tested but that was the previous rate.

If so, then fewer than 2,000 people are being tested each day, which does not meet the guideline.

We’re one of the best states in the country when it comes to the amount of COVID-19 right now but if we don’t measure we won’t know whether, and how, we need to make changes to stay the best.

A two-week drop in cases as measured by the 14-day running average, which would indicate that less of the virus is circulating.

Have we met this goal? Yes, but improvements are getting harder

The average number of new cases over the previous two weeks, the metric I use, had fallen consistently since June 4 and is now regularly below 30 a day.

However, the closer to zero that the number of new cases gets, the harder it becomes to reduce the figure further. I expect this number to stall out.

Fewer than four new cases per 100,000 people each day, which would show that the disease is below dangerous levels.

A positive rate of PCR tests below 5%, indicating that the virus is not spreading rapidly in the general population.

The positive rate has been around 3% as measured by the Department of Health and Human Services for two months.

Even the death rate is finally slowing. Fewer than two people a day are dying for reasons related to COVID-19 this month.

That is still a tragedy, but it probably shows the benefit of a recent emphasis on long-term care facilities, where about 80% of the state’s COVID-19 deaths have occurred.