In Keene they’re hunting COVID in the sewage 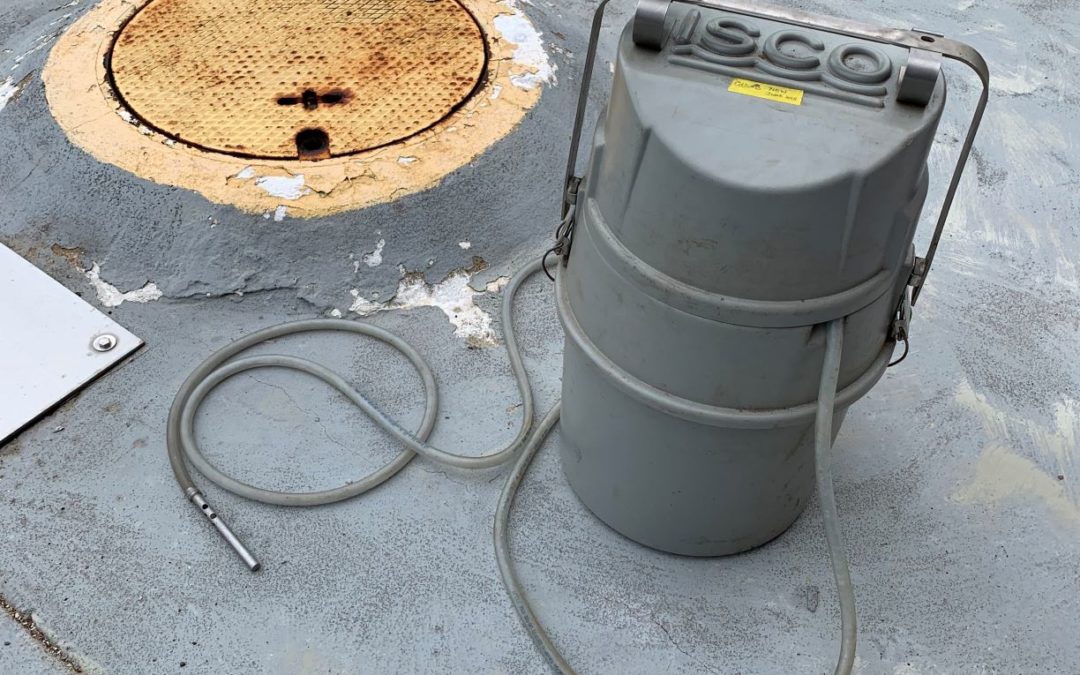 A sewage sampler before being lowered through a maintenance hole. Photo courtesy Keene Water Dept.

If you’ve had a PCR test for COVID-19 you know that collecting the tissue sample takes a few minutes and involves a minor snootful of irritation.

But that’s collecting a sample from one person. How about collecting samples from hundreds of people? Oddly enough, it can be easier.

“All people have to do is flush their toilet and we’ve got their samples,” said Dr. Jeanelle Boyer, a microbiologist and professor at Keene State College who is overseeing that city’s entry into the promising field of sewage system COVID-hunting.

The process is straightforward. The Keene Wastewater Treatment System will collect samples from sewer pipes at a couple of carefully chosen spots – one near Keene State and one representative of the rest of the city  –  then the samples will be sent to a lab, which applies the techno-magic of RT2PCR to see how many of the SARS-CoV2 viruses exist per liter. Finally, city and college health officials decide what action, if any, is called for.

“There’s great published data that shows that this can definitely (be used as) an indicator, but applying it as a public health surveillance is kind of groundbreaking for COVID,” said Boyer. She hopes to have the project in place before Keene State students start showing up.

Surveillance is the key word. This won’t pinpoint infected individuals but it could alert officials that an outbreak in one area is likely.

“People tend to shed virus in excrement up to two weeks before they show clinical symptoms, which gives you some run time to make some responses, as compared to trying to dampen it … after an outbreak,” said Duane Graves, operations manager at Sirem Laboratory in Tennessee. Sirem is part of Geosyntec, an environmental consulting firm with a New Hampshire presence that won the Keene contract.

“This gives you the opportunity to test everybody without testing anybody.”High-tech bucket

The idea of COVID monitoring via sewage is so promising that Geosyntec brags about it on their home page, a Massachusetts firm called Biobot is working with scores of treatment plants to develop a system, and there’s an international effort to streamline and align the process so that different cities can compare results and actions, Boyer said.

In Keene, the process will begin with a high-tech bucket operated by the Water Department.

“These samplers are specifically designed for the sewer system. We pop the cover of a manhole, suspend the sampler from a bracket. It’s got a peristaltic pump and we program the pump to sample at any interval that we want. Typically we take a sample every 30 minutes,” said Aaron Costa, operations manager of the city’s drinking water & wastewater treatment facilities. “It’s a simple device, battery-powered. Doesn’t take us long to set it up.”

Wastewater plants have long experience with regular sampling. Samples are taken regularly at outflow sites to ensure that environmental standards are being met, and Keene also samples the inflow from the town of Marlborough because it is charged on “biochemical oxygen demand and total suspended solids,” Costa said.

It is easy to move the sampling buckets around to meet various needs. For example, an outbreak spotted in a major sewer line could prompt testing at smaller lines that lead into it.

“You can get as specific as buildings, if you can access the outflow,” said Boyer. “We have discussed sampling at a dorm, sampling at a nursing home.”

The sewage samples, which are mostly water, are distilled down and sent to Sirem at a cost of about $450 per sample plus shipping. (The project’s budget is around $55,000 to $60,000.) That is when the geeky stuff happens.Very low levels

Viruses are tiny and sewage is big, so needle-in-a-haystack doesn’t begin to describe the situation.

“In a nasal swab with high virus titer, the virus is easy to detect. The important part of the sewage analysis is looking at very low levels and being able to see changes,” said Graves.

“You’re starting at a baseline of a few thousand (viruses) per liter, which is very, very common even in communities that don’t have substantial clinical cases … it bounces around at a few thousand per liter. You want to be able to see escalation, when population dynamics change – students arrive on campus, there’s a big civic event. Those kinds of events show up in the sewage,” said Graves.

I was curious how they detected one specific type of virus amidst all the – well, stuff – that’s floating in sewage. Turns out you can thank the Human Genome Project, which has revolutionized poop analysis.

“To specifically detect SARS-CoV2 in contrast to normal flu viruses, cold viruses, or other coronaviruses, we use a unique gene sequence – use three different genes,” said Graves.RNA, DNA, PCR, etc.

It’s a multi-step process that takes a single-strand RNA virus, converts it to DNA, multiplies it via PCR –  polymerase chain reaction, as if I had to tell you – and applies what Graves called a primer and then a probe (chemical, not physical) so the virus fluoresces. Then you can count glowing COVID-19 viruses in each sample as if they were fireflies in the night, although of course it’s automated.

“We have the capacity for several hundred tests per week,” Graves said.

As for safety, Boyer said handling all these COVID-19 viruses is safer than it sounds.

“You’re detecting viral RNA – genetic material, not the whole virus – so the question has always been, is it a viable virus or just the RNA? So far they haven’t been able to culture the virus, suggesting that it is not viable,” she said.How to respond

As complicated as all this seems, it’s not the hardest part. Much more difficult is deciding when, and how, to react to the information that’s gathered.

If Keene finds that the baseline level of SARS-CoV2 viruses near the college is, say, 10 per liter and one day they measure 100 per liter, what should they do? Mandate masks? Run individual tests on all 4,000 students? Close Keene State? Nothing much?

“Figuring out what is the trigger point – that, I feel, is still a work in progress. We have to decide how that would work for our community,” said Boyer.

Many places are grappling with this question and I imagine that guidelines will slowly emerge, although not without a lot of whining from loudmouths who think that enough wishful thinking will change reality.

As for Boyer, like many of us she’s facing COVID questions – in this case, how to get ready as college starts up again. Monitoring via sewage could help, she said.

“I would feel better going into the classroom if I knew levels in the community were low. It’s a way to make an invisible virus a little more visible.”