EPA OK’s a new tick-repelling chemical made from cedars, citrus 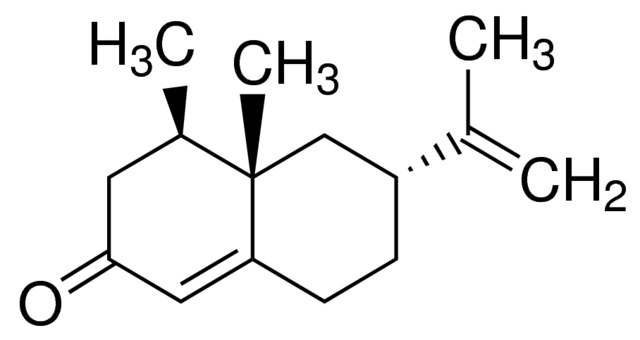 Nootkatone molecule - look at all those C's; it's wicked organic!

The EPA has approved the use of nootkatone, a chemical found in some trees and citrus fruit, as a tick repellant, reports the NY Times in a story with a cool headline: “Citrus Flavoring is Weaponized Against Insect-Borne Diseases.”

That doesn’t mean it will show up on shelves tomorrow, however: “The E.P.A. registration applies only to nootkatone as an active ingredient, the statement said. Any formulations using it in the future will have to be tested and registered separately.”

Granite Geek readers with more memory than I seem to have these days may recognize that weird-looking chemical name – I wrote about it two years ago after Gov. Sununu prodded the EPA to approve it against ticks:

For a number of years researchers with the Centers for Disease Control, and others, have been trying to understand why a few compounds taken from essential oils of a couple of cedar species seems to be effective as repellents and insecticide against many ticks and mosquitoes. (I thought “essential oil” was a marketing term used by New Agey types, but it has a real definition: They’re distillations of aromatic compounds, or molecules with certain structures that aerosolize easily, so they are associated with specific smells.)

A report  (here) from two researchers with the CDC’s Division of Vector-Borne Infectious Diseases, put it this way: “They have been shown to have biological activity against a variety of mosquito and tick species. Although these components act as both repellents and insecticides, how they function in either capacity is unknown.”

The chemical has that name because it was first found in the Alaska yellow cedar, also known as the Nootka cypress, which is named after First Nation people who live on Vancouver Island in Canada.