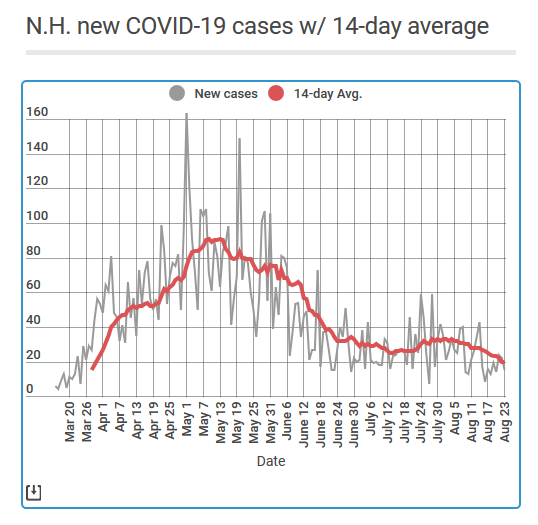 The latest report from the Monitor’s weekly tracking of the COVID-19 pandemic is very upbeat but it feels like a scorecard from the final baseball game of the regular season: Almost irrelevant because everybody’s waiting to see what happens in the playoffs.

The equivalent of playoffs in this metaphor is the opening of New Hampshire’s schools and colleges, which has the potential to completely change the state’s COVID-19 status.

Some colleges and high schools around the country have had to reverse course on in-person openings after clusters of COVID-19 cases showed up in students, staff or teachers. Almost all New Hampshire colleges and universities are bringing at least some students back to campus, many thousands of them around the state – although Dartmouth College is rethinking its plans as I write this.

Many public schools and private schools are also bringing students back into the building, although plans differ from town to town.

Everybody’s on edge. Students at some colleges have been asked to pack “go-bags” full of necessary items in case they need to be quarantined, as if they’re soldiers or firefighters who might get an emergency call at any time.

So who knows what will happen with these numbers in the weeks to come. For the moment, however, New Hampshire looks pretty good.

As of last week, the average number of new cases in the state is falling and is as low as it has been since the very first weeks of the pandemic. This decline is reassuring because the number had started going up at the beginning of August, raising concern that we were seeing more virus transmission due to businesses opening up.

Here’s the latest tally of the four key metrics we’ve been following:

The two-week average of new cases rose in July but has since gone done. As of this writing it is down to 20 new cases a day. The last time it was that low: March 30.

Have we met this goal? Yes, easily.

The average number of test results were reported each day was 2,506 last week. Remember, however, that number of different people being tested is much lower because multiple tests can be given to individuals, especially those working in health care.

As measured by the Department of Health and Human Services, the positive rate has been around 3% for more than two months.

I update three charts about the virus in New Hampshire each weekday: New casesnew hospitalizations and total deaths.