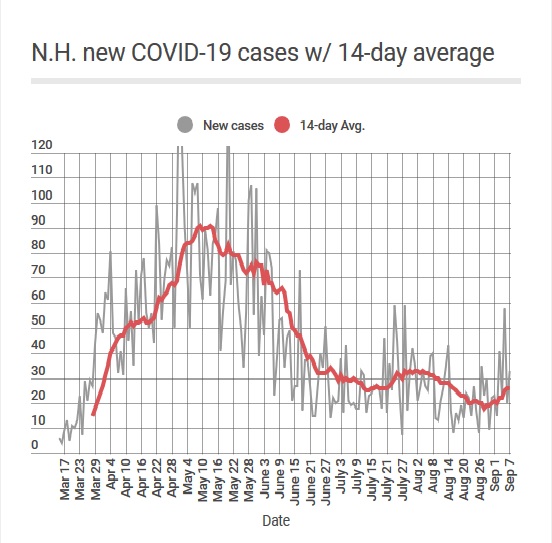 Note that the Y-axis has been shrunk from previous versions of this chart (maximum used to be 160 to fit in a couple of very high daily counts), making vertical change more apparent.

When it comes to COVID-19 in New Hampshire, for most of the summer we have been split into two groups: Nursing homes and everybody else.

Right now, however, that split is better described as schools and everybody else.

The switch comes about partly because the outbreaks that have plagued many long-term care facilities have been mostly brought under control by concentrated testing and focused response and partly, of course, because schools are starting back up.

Saturday’s figures reflected this split starkly. As of that day, New Hampshire had gone a week without a death attributed to COVID-19 for the first time since the pandemic started. Since more than 80% of deaths have been to elderly people, usually in long-term care facilities, this is a tribute to the strides New Hampshire has made.

On the other hand, Saturday saw 58 new positive cases, the highest daily count since just after the peak of the pandemic. That surge was prodded by cases at colleges and while this might reflect a glitch in reporting schedules, it also is a worrisome sign of what be about to happening.

The Department of Health and Human Services realizes this, as reflected in their interactive COVID-19 Dashboard. They’ve built an entire tab devoted to various schools in a searchable database.

As I write this, the database says eight colleges, three private schools and five public schools have at least one active case of COVID, for a total of 58 active cases – more than one-quarter the statewide total.

There’s a complication, however: Schools don’t all report at the same time. Right now, two school reports are 10 days old and reports from all the non-colleges are at least 4 days old.

This uncertainty makes it hard to judge on a day-to-day basis how the reopening of many schools is affecting the spread of COVID-19 in the state.

I suspect, or least hope, that this will improve as the school year continues. Everybody in education, from teachers to administration to staff to parents to students, is dealing with unprecedented upheaval. We should give them the benefit of the doubt when it comes to reporting for at least a little while, I think.

With that in mind, here is the Monitor’s weekly update on the state of the pandemic in New Hampshire, which according to data from DHHS is still very good.

Have we met this goal? No, but numbers remain low.

As of this writing the two-week average is 26 new cases a day, the same it was a month ago and higher than the level at the start of August.

However, 26 new cases a day in a state of 1.3 million people is a pretty small number. As long as it doesn’t start rising, this is probably OK.

Have we met this goal? Yes. Our number of new cases has been below this level for more than two months.

The average number of test results were reported each day was over 3,000 last week and has topped 4,000 on some days.

Goal 4: A positive rate of PCR tests below 5%, indicating   that the virus is not spreading rapidly in the general population.

I update three charts about the virus in New Hampshire each weekday: New cases,  new hospitalizations, and total deaths.