As cases keep rising, our COVID tracker adds another metric 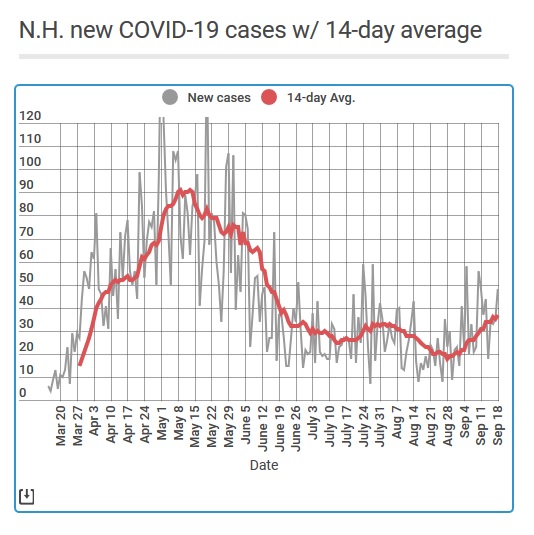 The slope on the right isn't as steep as it was on the left, thankfully, but it's positive

With small clusters of COVID-19 popping up at schools and perhaps elsewhere, including the Portsmouth Naval Shipyard, New Hampshire’s pandemic situation remains, shall we say, unsettled.

But nothing worse than that – at least, not so far.

The average number of new cases in the state continues to rise slowly, but Dr. Benjamin Chan, state epidemiologist, argued Thursday that this was a reflection of much increased testing at schools and colleges.

“We are not, however, seeing a new surge in New Hampshire,” he said during a press briefing, pointing to the continued very low number of new hospitalizations in the state.

If these outbreaks remain small and stay contained in each location, then even a continued rise in total cases wouldn’t be too alarming, because it wouldn’t say that the disease is spreading through the general population.

How can we know if a rise is cases isn’t spreading? With Chan’s comment in mind, I’m going to add a fifth metric to the Monitor’s weekly measure of the pandemic’s status in New Hampshire: The number of new hospitalizations related to COVID-19 each day.

I have been tracking this number all along and now seems a good time to include it as an indication of whether we are transitioning back to a more serious phase of the pandemic.

So here is this week’s tally:

Goal 1: No sustained increase in number of new hospitalizations related to COVID-19. Have we met this goal? Yes.

In late May, almost eight people a day on average were being hospitalized because of COVID-19. The actual figure was even higher because the state adjusted figures in mid-July, adding 74 hospitalizations that had been incorrectly labeled in the database.

By the start of August that two-week average was below two new hospitalizations a day, and this month it has consistently been below a single person sent to the hospital in New Hampshire because of the SARS CoV-2 virus. As of Saturday, only eight people total were in the hospital due to COVID-19 in the state.

On a similar note, COVID-related deaths have gone way down. The current average is less than one a day, a sign of how outbreaks in long-term care facilities have been brought under control.

I average the daily new-case numbers over two weeks, to smooth out the effect of reporting delays. (Many other places average them over a single week, which explains occasional discrepancies between their conclusions and mine.)

The two-week average was 18 on Aug. 28 but has consistently edged up since then. By Friday, Sept. 18, it had doubled to 37 new cases a day, fueled by those outbreaks mentioned above.

Even with the increase we’ve been seeing, our number of new cases has for months stayed below this level, which is commonly used as a sign of widespread infection.

The average number of test results reported each day was about 3,500 last week, thanks to increased testing at schools and colleges.

However, we need to keep testing all over the state for anybody who asks for it. That’s the only way we’ll know what’s actually going on.

Goal 5: A positive rate of PCR tests below 5%, indicating that the virus is not spreading rapidly in the general population. Have we met this goal? Yes.

I update three charts about the virus in New Hampshire each weekday: New cases, new hospitalizations, and total deaths.