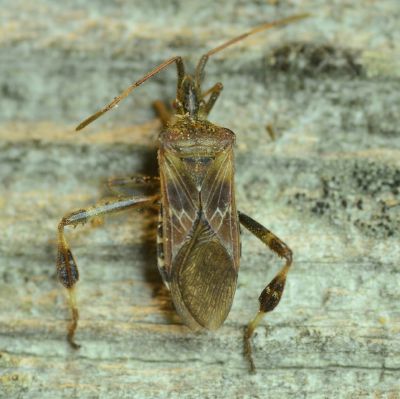 This is not a stinkbug, although it stinks - it's a western conifer seed bug

There are probably a lot of bugs invading your house right now that stink when you smash them. But that doesn’t mean they’re stinkbugs.

They’re more likely to be western conifer seedbugs, or perhaps box elder bugs. And they might actually be a stinkbug – the damaging brown marmorated stinkbug, which is showing up more and more, much to the dismay of farmers.

Happily, they’re just annoying and not dangerous to you. The disease-carrying “kissing bug” isn’t here, at least not yet.

Welcome to the confusing world of seasonal insect invaders, currently at its autumnal peak.

“I think I pulled 20 of them out of my house this week,” said state entomologist Piera Siegert.

Insects have always sought refuge in people’s homes as daylight shortens and temperatures go down. Some of these invasions are hard to spot but others are more visible. Ladybugs have long been a high-profile arrival in homes as the leaves start to turn.

In recent years what are loosely known as stinkbugs – large, relatively slow-moving insects with a non-segmented body and distinct, often conical, heads – seem to have become more prominent in the home-invasion arena, although it’s hard to say for sure because of a lack of data.

“Nobody keeps track of it, really,” said Siegert.

In her decade in New Hampshire, Siegert says the number of calls she hears from frantic homeowners has declined but that probably is because of the NHBugs.org program established by UNH Cooperative Extension, which gathers up insect-related concerns and parcels them out to experts.

It appears that in much of the state, the most common bug pestering home-owners right now is the western conifer seedbug, which is relatively long and thin. It is slow-moving and easy to catch and kill, which produces a sickly sweet odor, part of its chemical defenses against intruders. If you crush a half-dozen or more at one time, as this working-at-home reporter* has done several times this month, the smell can drive you out of the room.

“It is the one that everybody calls a stinkbug, but it’s in a group called the leaf-footed bug,” said Siegert.

If you don’t want to crush them, Siegert recommends vacuuming them up. But you should change the vacuum cleaner bag or the smell will escape.

The western conifer seed bug’s name is self-explantory: young bugs suck juices from seeds in pinecones of certain fir, spruce and pine trees – their population fluctuates as conifer cone production fluctuates – and they are native to the western U.S. They have moved east over the past century and are now even found in Europe.

Their annoying but they don’t bite, don’t sting, and don’t do much damage to trees or agriculture. That last statement can’t be said of the brown marmorated stinkbug, which has a wider, shorter body but otherwise looks similar to the western conifer seed bug. The name “marmorated,” which means having a veined appearance like marble, refers to streaks of dark color often seen on it.

This stinkbug is a major farm pest that has only recently arrived in New Hampshire as warming climate lets them move north. Agriculture folks are on the alert for their arrival in numbers big enough to create a serious problem.

There’s also a native brown stinkbug that looks similar but isn’t much of an agricultural pest.

By the way, these stinkbugs aren’t bugs by entomoligsts’ standards. To an insect specialist a “bug” is a specific order of insects, with sucking or piercing mouthparts, that are  distinct from beetles, flies, and other insects.

Ladybugs, for example, are actually beetles. But seed bugs are bugs.

Another possibility for a home invader is the box elder bug, which looks like a slimmer version of the conifer seed bug with red and black markings. As the name suggests, it prefers box elder trees. If those trees aren’t around you probably aren’t seeing many of them.

Another similar looking insect that is expanding its range as climate changes is known as the kissing bug, feared because it often carries and spreads the parasite that causes Chagas disease, a painful and deadly ailment. While it may arrive here eventually, our winters have ben keeping kissing bugs at bay.

* This is the weird way newspaper people use first-person narrative without stooping to first-person pronouns, which for some reason are frowned on unless you’re a columnist.