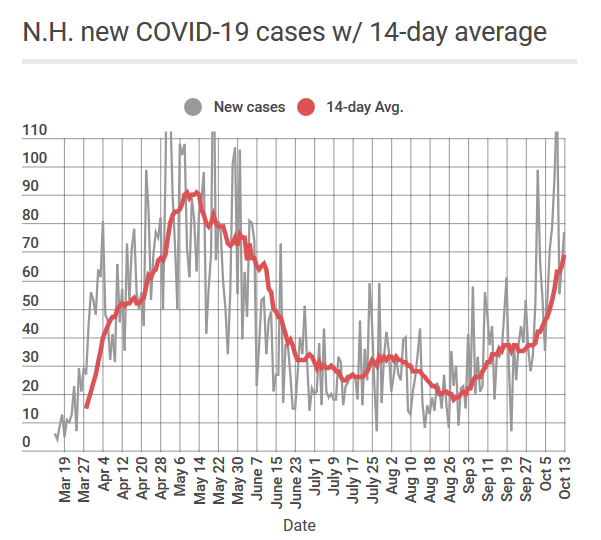 The long-feared autumn rise in New Hampshire COVID-19 has started to arrive, as reflected in a deterioration of the Monitor’s weekly tracking – for the first time in months we are missing two of our goals – as well as the state’s concern that community-wide transmission is happening in more areas.

Part of the issue is New Hampshire’s decision to include rapid antigen testing in daily results, rather than just PCR tests.

Both types of tests are conducted on nasal swabs. PCR tests detect the genetic material of the virus itself. They are more reliable but take several days to be performed by a laboratory.

Antigen tests detect proteins on the outside of the SARS-CoV2 virus and depend on chemical reactions that can be read on site in as little as 15 minutes.

The state said earlier this month antigen tests that have proved reliable enough are now so widely available that they can be included in the daily counts, rather than waiting for their results to be confirmed by PCR tests.

The number of antigen tests is still relatively small compared to PCR tests but should increase. The federal government is expected to provide the state with as many as 400,000 Abbott BinaxNOW antigen tests by the end of the year.

In recent days about one-third of new cases have been detected through antigen tests: on Thursday, for example, there were 55 PCR positives and 24 antigen positives, while Wednesday saw 43 new cases from PCR and 28 from antigen tests.

This undoubtedly has contributed to a sharp increase in cases of the disease. The average number of cases reported in the state has risen by more than 10 a day in the past week, the fastest rise since the early weeks of the pandemic.

But state officials say more testing is not the only reason for the rise. Health Commissioner Lori Shibinette warned Thursday that community-wide spread was being seen in Hillsborough County and the Seacoast – the state’s population centers – driven by small clusters at events where people congregate such as at church, or sporting events or celebrations.

New Hampshire is not alone in seeing signs of a possible second wave of COVID-19. Many states are seeing an increase this month, fueled mostly by schools and colleges reopening. That includes other states in New England, which has been the region least affected by COVID-19 during the summer.

Here’s how we’re doing on the weekly metrics that the Monitor has been tracking all summer. As always, you can check three charts about the virus in New Hampshire that I update each weekday, via these links: New cases, new hospitalizations, and total deaths.

Goal 1: No sustained increase in number of new hospitalizations related to COVID-19. Have we met this goal? Yes.

The two-week average of new hospitalizations has hovered between one-half and one per day all summer.

COVID-related deaths also remain low, although October has seen a worrisome increase, the first in months: Thirteen  people died from the disease during the first 10 days of the month.

As mentioned above, the two-week average in daily new cases, which had been rising slowly since late August, has jumped this month. The average was 37 on Sept. 30 but had risen to 69 by Oct. 13.

The average number of new cases has been below 54, the per-capita level commonly used as a sign of widespread infection, since June 16 – but by this week it was nearing 70.

The addition of rapid antigen tests as mentioned above brought the average number of tests over 7,000 for the week.

Goal 5: A positive rate of PCR tests below 5%, indicating that we’re doing enough testing to get a good handle on how widespread the virus is. Have we met this goal? Yes, easily.

As measured by the Department of Health and Human Services, the positive rate for PCR tests has been about 1% recently. Antigen tests have a higher positive rate, sometimes rising above 5%, but many fewer are being run so the rate fluctuates greatly.