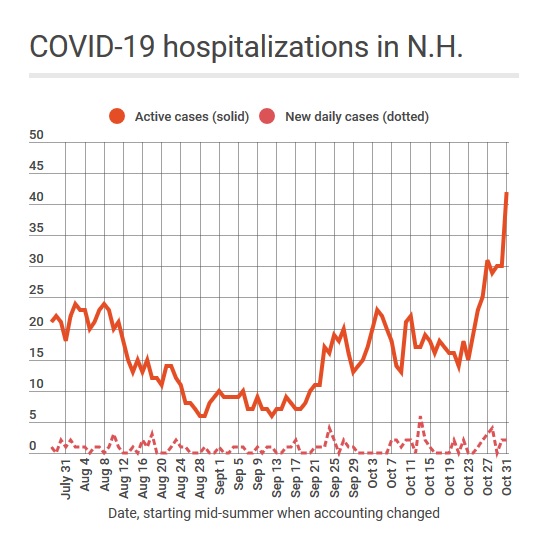 Ever since COVID-19 arrived and turned us all into amateur epidemiologists poring over hospital reports and debating antibody counts, we’ve really just wanted the answer to one question: “How worried should we be?”

Right now, unfortunately, the answer is: Increasingly worried. We are now failing on three of the five goals that the Monitor has been following for months.

This extra concern doesn’t come merely from the rapidly rising number of new cases, partly because the recent addition of somewhat less reliable (but much speedier) antigen tests has muddied the conclusion.

And the risk of seeming callous, extra worry is not triggered by the slight increase in deaths seen this month. Every death is tragic and needs to be addressed, but they have mostly occurred in long-term care facilities, not throughout the population at large.

The red flag is hospitalizations.

All summer long, the number of people in New Hampshire whose COVID-19 symptoms were seriously enough to send them to the hospital was low and steady, fluctuating between 5 and 10. When September arrived it rose to almost 20 but stabilized again.

And then it jumped, to 31 on Oct. 27 and to 42 on Halloween. This is below the figure during the spring outbreak, when more than 100 were in the hospital at a time, but it’s well beyond anything we’ve seen since the first wave of cases subsided.

From the very start the biggest worry of health officials is that too many people will get COVID-19 at once and overwhelm hospitals, causing a ripple effect. They’re seeing that out west right now. New Hampshire never came near that level of cases in the spring and hopefully won’t this winter, but of all the figures that the Monitor follows right now, the number of active cases in state hospitals is probably the most important.

I update a chart showing that figure, as well as charts on new cases and overall deaths from COVID-19, each weekday and some weekends. You can see them online: Daily new cases – hospitalizations – deaths.

Here’s how we’re doing on the weekly metrics that the Monitor has been tracking since the start of summer.

Goal 1: No sustained increase in number of new hospitalizations related to COVID-19. Have we met this goal? No.

As mentioned above, the number of people in the hospital with COVID-19 has doubled in the second half of October.

The two-week average for new cases is higher than it has ever been in the state, hitting 113 on Saturday, as compared to a previous high of 91.

The complication is that the number includes positive results from antigen tests. Until mid-October, the tally only included PCR tests.

Both are based on swabs, usually nasal swabs, but PCR tests detect genetic material and must be performed by a lab, usually taken two or three days. Antigen tests detect proteins associated with the novel coronavirus and give a result within 15 minutes.

Antigen tests are less accurate than PCR tests and are more prone to false negatives, meaning they say that a patient is free of the virus when that’s not true. As a result they haven’t been given widely to people without symptoms until recently, but the CDC says that their speed makes them a valuable tool for use in populations at high risk, such as nursing homes or among first-line responders. The state expects to distribute hundreds of thousands of antigen tests for such groups by the end of the year.

Because antigen results are collected on site, rather than in a centralized lab, the state does not have data to release each day about many are given and what rate of positive results they are encountering, although it can tally how many of each days’ new positive cases were found with antigen tests. Up to one-quarter of positive cases reported each day have been found via antigen tests, so they might not have been included in earlier tallies.

As reported above, the average of new cases each day is now 99 and has been rising for two weeks.

Goal 5: A positive rate of PCR tests below 5%, indicating that we’re doing enough testing to get a good handle on how widespread the virus is. Have we met this goal? Yes, easily.

We have performed more than 8,000 PCR tests on every day but Sunday, with positive rates below 2%, for weeks now.