If you want more rattlesnakes in a chilly climate, you need more places for them to bask 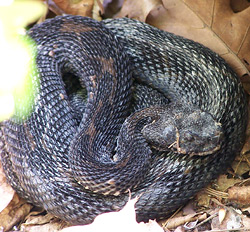 The timber rattlesnake is the only poisonous snake living in New Hampshire but there aren’t many of them, partly because we’re at the northern edge of its range and partly because people have destroyed much of its habitat.

New Hampshire Fish and Game biologists are trying to figure out the easiest may to increase numbers of this endangered reptile, and their report just out in the publication Northeastern Naturalist describes one. Since rattlesnakes need sunny places to soak up some rays, especially pregnant females, it helps to get rid of trees that case shade open, rocky ledges where they live.

The paper is linked from the Fish and Game website about the timber rattlesnake (which has a great Latin name: Crotalus horridus), right here. it’s the link titled “Tree Removal Likely Improves Thermal Quality of Basking Sites for an Imperiled Timber Rattlesnake Population at the Northern Edge of its Range.”

State biologists are always tight-lipped about where timber rattler populations are exactly, because they’re afraid people will collect them for private sale. Or they might freak out and kill them because people are irrational about snakes, as Massachusetts found out when it tried to set up a rattlesnake preserve on an island. I once encountered a rattler on a hiking trail in New York state, on a ridge where they’re relatively common. Gorgeous animal – didn’t bother us if we didn’t bother it.