N.H. birth rates fall further due to the pandemic 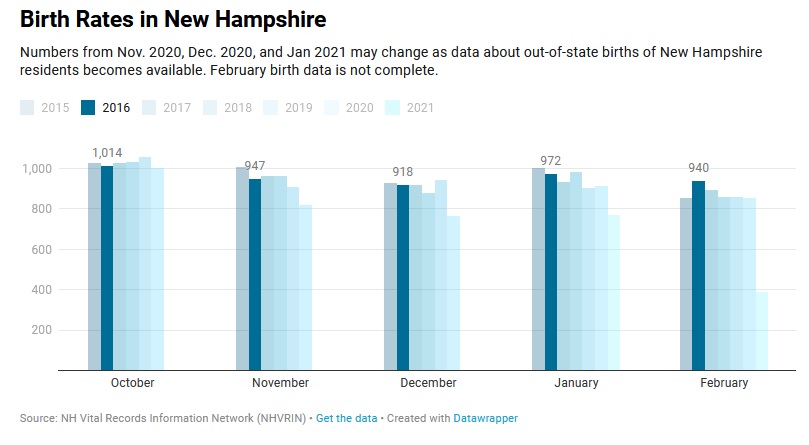 When the lockdowns started there was lots of joking about how we’d see a baby boom in 9 months created by bored couples. The reality is quite different, as reported by the Concord Monitor:

In December of 2020, nine months after the state’s first stay-at-home order was announced, there were about 180 fewer births than the same period in 2019 and at least 100 fewer than any year since 2015, according to data from the NH Vital Records Information Network. These numbers may change as data is updated.

Kenneth Johnson, a demographer at the University of New Hampshire, said this the decline in births is only expected to grow.

“I think a lot of women who might have been thinking about having children have simply decided that this is not the time to have a baby,” Johnson said.

The first signs of a COVID baby bust revealed themselves through Google searches. Based on an analysis of search terms like “morning sickness,” and “pregnancy symptoms,” researchers predicted a 15% decline in the U.S fertility rate. Then, health providers started seeing a spike in birth control demand. As birth data from December and January trickle in, demographers are beginning to assess the decline.

This is not New Hampshire’s first baby bust. In fact, the Granite State has shown a trend of declining births since the Great Recession of 2008.

For the last several years, the number deaths has outpaced the number of new births in New Hampshire, one of only four states where that’s the case. If not for migration to the Granite State, Johnson said the population would almost certainly be shrinking.

Declining birth rates are typical during periods of economic turmoil, Johnson said. After the Great Recession, the fertility rate in New Hampshire — the number of babies born per 1,000 women of childbearing age — dropped 11%. Johnson said it’s hard to compare these recessions, which, while devastating, were largely confined to the economic sector as opposed to a global pandemic that has transformed nearly every aspect of life.

“What’s going to happen when you have both economic problems and on top of that you’ve got a pandemic?” he said. “Nobody knows for sure.”

The extent to which birth rates will decrease as a result of the pandemic still isn’t clear.

The question on the minds of many demographers is whether women and families will wait until the pandemic is over to start having kids or whether the resolve to forgo children is more permanent. Women of childbearing age who lived through the Great Depression never had as many children as the women who came before them or the women who came after them, Johnson said.

Some women who may have put off pregnancy during the 2008 recession, now in their late 30s, may now be facing another difficult decision.

“Imagine these women who have put off having children and now just when maybe they were thinking it was time to have those children, now we’ve got a COVID epidemic going on,” he said.

The effects of declined birth rates can ripple through an entire society.

Johnson said the state would likely first see the consequences in schools — small school districts with dwindling student bodies would have to merge with other districts. As the baby bust generation approached college age, New Hampshire state colleges would see fewer applicants. As they entered the workforce, these employees would be tasked with supporting the much larger aging generation above them.

“You have this change rippling up from the bottom from cohorts getting smaller and smaller, at the same time at the top, that population that’s at risk of mortality is increasing,” Johnson said.