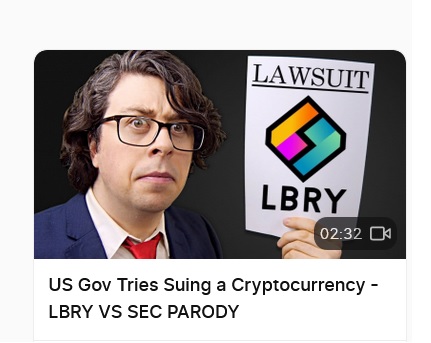 This is the first video currently on Odysee, LBRY's video platform.

UPDATE: Discussion on the reddit subgroup r/newhampshire is pretty nuanced and seems well-informed: Check it out here.

The Securities and Exchange Commission has filed a civil suit against New Hampshire firm LBRY saying it “failure to register an offering of securities.” NHPR wrote about the case earlier today (here).

From the SEC complaint (PDF here):

From 2016 through the present, LBRY offered and sold millions of dollars’ worth of unregistered securities to investors, in the form of a digital asset called LBRY Credits (“LBC”), which LBRY told investors was to be used to fund its business and build its product – a digital content marketplace or network offering video and audio recordings, images, and other information (“LBRY Network”).

At various times, LBRY represented to venture capital investors that it projected the LBC that it held itself would eventually be worth billions of dollars once it built the LBRY Network to its anticipated scale.

LBRY’s defense is basically that the SEC doesn’t understand the LBRY token, its unit of crypto-whatever, thinking that it’s solely an investment tool. “We do not believe that the LBRY token is a security subject to SEC regulation. The LBRY Credit is a commodity that facilitates the LBRY protocol which thereby allows individuals to publish content, purchase content, tip creators, and boost content on the decentralized LBRY protocol,” they say in their statement, which claims the suit could undermine “the blockchain and technology industry.”

I wrote about LBRY in 2018 but strictly looking at their video-hosting service, Odysee, which wanted to be a peer-to-peer, micropayment, blockchain-enabled YouTube.

This case, by the way, does not seem to be related to the criminal complaints alleging blockchain-enabled money laundering that were filed earlier this month. Why so much action in New Hampshire? Perhaps it’s just that the loud embrace of cryptocurrency and related tech by the Free State Project and fellow travelers has drawn a lot of regulatory attention.