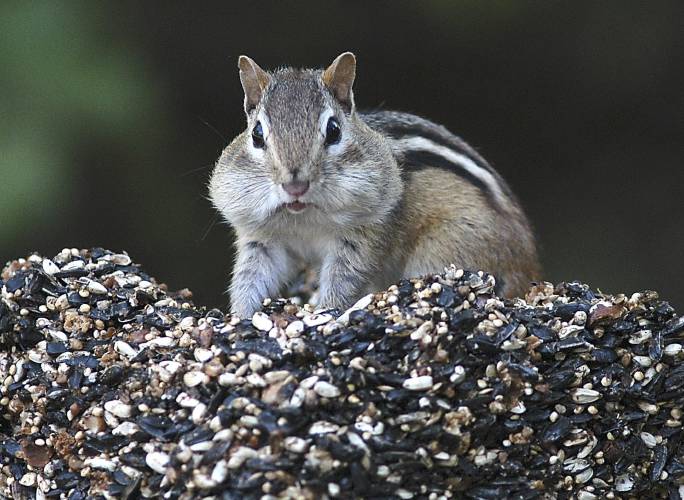 FILE - In this Oct. 6, 2005 file photo, a chipmunk stuffs his mouth with seeds and returns to his nest to store them for winter in Canterbury, N.H. There has been a spike in New England's chipmunk population during the summer of 2020. (Ken Williams/The Concord Monitor via AP, File)

No, you’re not imagining it: Chipmunks really are everywhere.

“We have no formal monitoring of chipmunks,” said Matt Tarr, a wildlife biologist with UNH Extension, “But my observation and what I’m hearing from folks all over New Hampshire is: There’s a lot of chipmunks this year!”

“That was a perfect storm of good conditions for small mammals. That probably isn’t something that we’re going to see again for a long time,” Tarr said.

Populations of small mammals naturally fluctuate from year to year, Tarr said, with two factors being most important: The amount of natural foods, in this case particularly acorns and small fruits; and the severity of winter.

Last fall was a really good fruit year and the winter was pretty mild, Tarr said. More adults survived the dark months to breed, and they’re healthy enough to have bigger litters and multiple litters.

“What we’re seeing is natural … not characteristically uncommon,” Tarr said.

The flip side of the cycle is that predators will benefit. Foxes, owls, bobcats and coyotes are enjoying this year’s small-mammal feast. As a result, their populations will probably increase, holding down the chipmunk population next year and spurring the next stage in the up-and-down cycle.

“Next year, or the year after, there won’t be a whole lot (of chipmunks),” Tarr predicted.

Chipmunks are cute but they can wreak havoc on gardens. Tarr noted that they particularly like strawberries but aren’t picky. “Chipmunks are omnivores. They eat everything.”

Unfortunately, there’s not a lot you can do to keep them out of the garden short of setting up and maintaining extensive netting and fencing, of the sort used by commercial growers.

“They’re such small critters they can get anywhere,” Tarr said.

For his part, the biologist says he just lives with it.

“Be as diverse as possible and try to plant extra,” he said. “I’ve just come to the conclusion that I’m happy to see the critters. Whatever I get out of my garden is fine.”