5,000 tons of concrete to help submarines float into dry dock 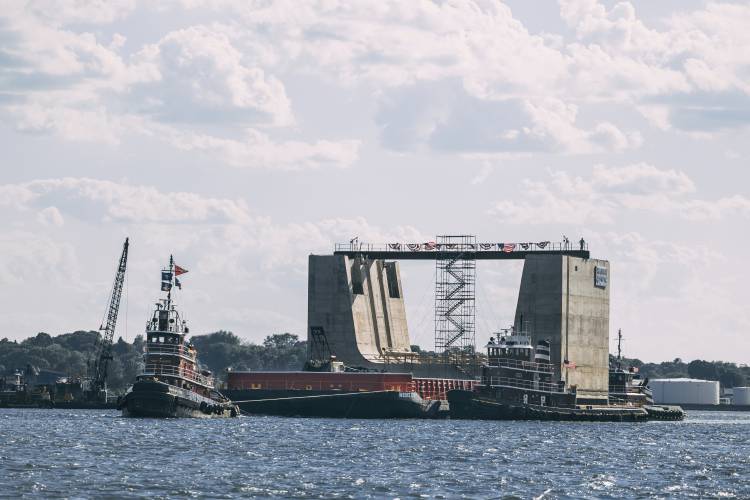 In this photo provided by Cianbro Corp., a 5,000-ton concrete entrance structure is towed out of the harbor, Sunday, June 20, 2021, in Portland, Maine. The structure, built by Cianbro in Portland, will be used by the Navy at the "Superflood Basin" project at the Portsmouth Naval Shipyard, in Kittery, Maine.

From AP: A $158 million project that’s part of the Navy’s plan to make Portsmouth Naval Shipyard more efficient and less dependent on tides took a big step forward Monday with the arrival of a key component.

The 5,000-ton precast concrete entrance for one of the shipyard’s dry docks will be installed over the next four weeks, a shipyard spokesperson said. Built by Maine-based Cianbro, it arrived by barge on Monday.

It’s a key part of the “Superflood Basin” project that will allow submarines to enter Dry Dock No. 1 without a buoyancy assist system.

“The arrival of the entrance structure gets us one step closer to operating independent of the Piscataqua River tides and optimizes our dry dock operations for years of safer and more efficient use,” Capt. Daniel Ettlich, the shipyard’s commander, said in a statement.

It’s part of a $21 billion effort to upgrade the nation’s four public shipyards, each of them more than a century old, to speed maintenance and repairs at a time when the Navy is facing growing threats from China and Russia.

The 221-year-old Portsmouth Naval Shipyard is the nation’s oldest continuously operated public shipyard. The shipyard is tasked with repairing and overhauling nuclear-powered submarines for the Navy.

The Superflood Basin that involves Dry Dock No. 1 is one of the biggest improvements at the shipyard. That dry dock is the shallowest of three dry docks at the shipyard on Seavey Island.

Similar to a navigational lock, the basin will allow the seawater level to be raised and lowered, enabling the Navy’s nuclear-powered submarines to enter the dry dock regardless of the tide.

Once completed, both classes of submarines will be able to enter the dry dock without tidal restrictions or help from buoyancy cans, Eddy said.