It’s our biggest rooftop solar array! That’s not saying much in N.H. 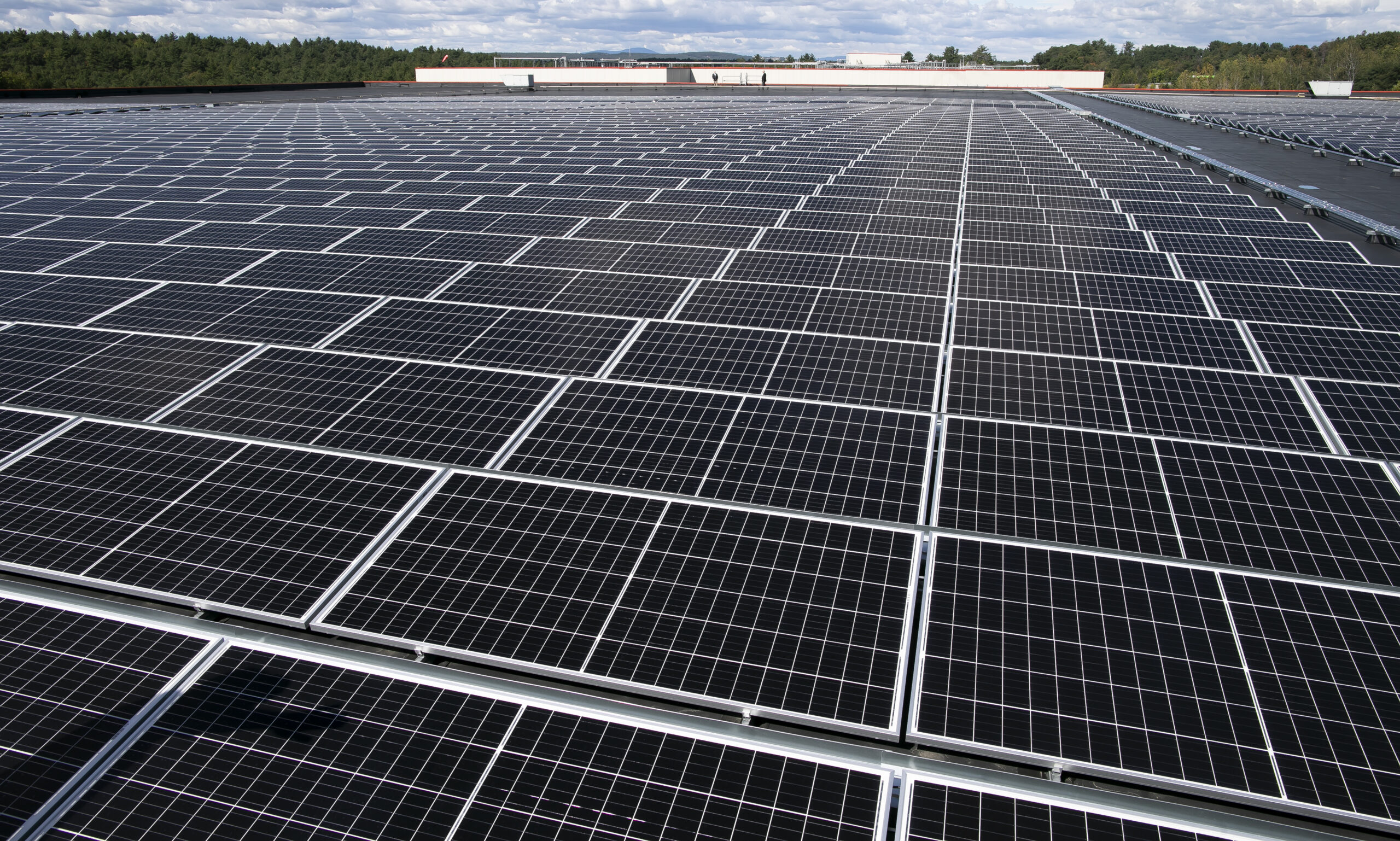 The largest rooftop solar array in New Hampshire was unveiled on Wednesday and is going to make a big impact on the state. But not for the right reason.

“Just to put it in perspective … these 3,400 panels will add an entire 1% to New Hampshire’s total fleet of deployed solar capacity,” said ReVision Energy co-owner Dan Weeks during the ribbon-cutting ceremony for a 1.3 megawatt array atop the Associated Grocers of New England warehouse in Pembroke.

A little glance at Solar Energy Industry Association data shows that if this array was being unveiled in Maine it would add only one-half of one percent to statewide capacity. In Vermont, just one-third of one percent. And in Massachusetts it would hardly be noticed.

In other words, that big impact mostly reflects New Hampshire’s status as a solar laggard. “The state is a little bit behind other states,” is how Weeks gently put it in his remarks.

There are signs this may change, notably the state’s long-overdue expansion of the net-metering cap for  municipalities from 1 to 5 megawatts. And the ever-more-alarming results of the climate emergency is leading to more interest from companies in reducing global warming impact, Weeks indicated, an interest that is helped by federal incentives.

The $2.3 million cost of the 3,400-panel array was partly offset by almost $600,000 in investment tax credits, reducing the payback period – the time it will take for savings in lower electricity costs to cover the investment – to between 8 and 9 years, said Steven Murphy, the former Chief Financial Officer of Associated Grocers.

The 75-year-old Associated Grocers of New England holds and distributes grocery products for member stores, which are typically smaller than chain supermarkets.  The Pembroke warehouse is the largest retailer-owned grocery distribution center in New England.

Over the course of a year, the array should provide about 20% of the electricity used by the massive, 500,000-square-foot building, which includes a lot of power-hungry refrigeration. On bright, cool afternoons the array can produce more power than the building needs, allowing Associated Grocers to sell the power back to the grid.

Larger arrays exist in the state and much larger arrays are in the works, but they are mounted on the ground. Rooftop arrays require less wiring to connect them to users and take advantage of unused real estate, but may include more difficult maintenance.

In his comments, Weeks assured the company not to worry about one winter maintenance issue.

Because the panels are tilted to maximize solar input and spaced about a foot apart there is room for snow to slide off them, and any loss of production due to snow has been factored into estimates, he said: “You don’t need worry about sending people up to literally shovel 3,400 panels in the winter.”