In an electric car world, who will be the auto mechanics? 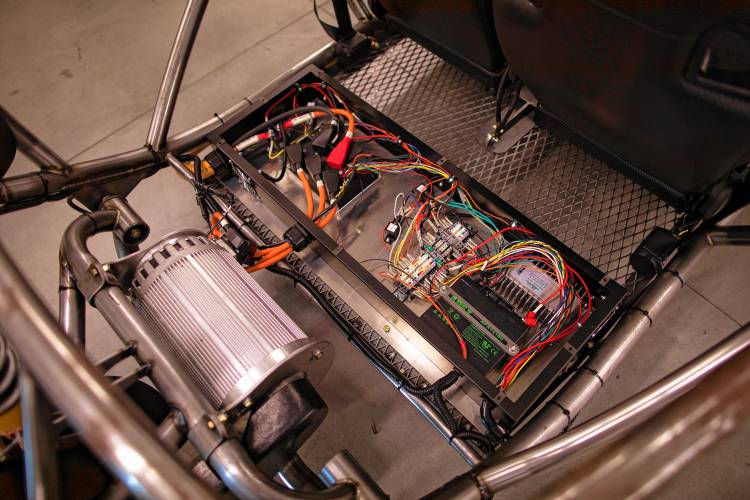 It is becoming increasingly clear that electric vehicles are the future of vehicles. But who’s going to fix them when they break down?

The world’s greatest grease monkey (as a mechanical dunderhead I use that term with respect and admiration) can’t do much if your electric car’s battery management system fails. That’s a concern which is starting to resonate with industry, including the folks in New Hampshire who train tomorrow’s auto mechanics.

“Tesla reached out to us,”  said Marc Bellerose, chair of the automotive technology department at Manchester Community College. “They were looking, just like everyone else, to bring new technicians into their industry.”

Last week, this question brought 22 teachers from high school auto-tech programs around the state to Nashua Community College, one of several state community colleges that train auto technicians (Concord’s NHTI is not one of them).

As part of continuing education to keep their certification, the teachers had classroom work; checked out a Mustang Mach-E, Ford’s first entry into the battery-electric market; looked at the stripped-down Switch Lab electric vehicle used for training; and talked about life once engine oil changes are a thing of the past.

That’s partly because the introductory classes of tech training have to spend their time on the basics starting with “righty-tighty, lefty-loosey,” and partly because they have to teach about current systems that will remain no matter what, such as suspension, brakes, lights and steering. Also, every internal-combustion vehicle sold today is going to need a mechanic for its working life; our roads won’t be EV-only for decades.

But the biggest problem may be that it takes specialized equipment and training to work on electric-car batteries as compared to traditional low-voltage auto electronics.

“There’s even special gloves, fencing. … I don’t see high schools having the equipment, the training,” said Mayotte. “Not for a long time.”

All auto-tech classes already teach safety around high-voltage electronics because of hybrid cars, but those classes don’t go much beyond telling students what not to touch. The Switch Lab training car, which is used in some high school courses, is more hands-on but has a specialized battery design that keeps it below 60 volts.

The immediate future might be different at the next step up, the community college level. They offer one-year certificates and two-year associate’s degrees as an auto mechanic, although it takes certification from manufacturers to work on some systems. “You’re a lifelong learner,” Mayotte said.

Nashua Community College is in the process of assessing how it should alter curriculum and courses to train electric-vehicle mechanics, which also involves how to integrate this future technology into all their other departments.

Cars are an interesting challenge for wannabe software developers, she said, because failure can be life-threatening.

“The quality of software you need in a car has to be extremely high. That’s part of what we teach: the use that software is put, that determines where you should draw that line,” she said.

Part of the issue of electrification of motors is that it will speed up the pace at which cars become mobile computers. As the recent computer chip shortage has shown, even gas guzzlers depend on dozens of modules, each basically a small computer, to control everything from engine operation to pollution control to audio systems. Auto mechanics won’t have to be programmers but they will need skills more often found in the I.T. department.

“The students are not writing code, but they do reprogram the computers on the car,” said Bellerose. “If you replace a transmission, you have to go to the programming procedures for its computers – they have to be set back to zero, if you will, so it knows that this is a new transmission. … You’re a software user and an installer.”

Electric mobility is going to redefine cars and trucks in ways that haven’t happened such at least the invention of the automatic transmission or the electric starter, to the point that transportation won’t be the only thing mechanics have to think about. Dealing with vehicle-to-grid technology, in which a car or truck system can power a house, is going to become part of the auto technician’s toolbox.

“These are not just a vehicle that gets from point A to point B,” said Prof. Karl Wunderlich, chair of Industry and Transportation Department at Nashua Community College. “The mindset of students is starting to open to that idea.”

This is not, of course, the first time the auto industry has adjusted training due to technology. Ask starting mechanics about carburetors and you’ll probably get a blank look.

“The job hasn’t shrunk – if anything it has just expanded,” said Bellerose. “You need to know all the fundamental things you would do as a technician, and then you add more technology. … It just keeps growing.”